Available to buy in Australia from Book Depository (free shipping from UK to Australia),  Booktopia and Angus and Robertson.

You can also buy the digital PDF version of this book here.

Sydney is surrounded by some of Australia’s most beautiful national parks and wilderness areas, and one of the world’s most spectacular coastlines. Wild Swimming Sydney Australia details over 250 amazing places to swim, all within a 3 hour drive of the city, ideally suited to day trips and weekends away for Sydney residents and the 60 million tourists who visit each year.

This book includes information on available facilities, length and grade of the walk – as well as the ascent/descent – involved, the closest public transport, as well as detailed directions and co-ordinates. The authors also cover the history of wild swimming in Sydney, social and environmental etiquette, tips on wild swimming with children and general wild swimming safety. Wild Swimming Sydney Australia  is perfect for the armchair traveller, the serious adventurer as well as families looking for days out.

For our Australian customers, we can post the book to you for a £9 shipping cost (reduced from £13).

You can also buy the pdf version of Wild Swimming Sydney Australia here.

If you prefer, you can buy the Kindle or print book from Amazon here.

If you are interested in the forthcoming Android or Apple Wild Swimming Sydney Australia App please email sydney@wildthingspublishing.com.

About the swimming holes guide book

The best-selling Wild Swimming series travels to Australia to explore the legendary swimming holes around Sydney, revealing secret pools, lagoons and oases.
• Sydney is surrounded by some of Australia’s most beautiful national parks and wilderness areas, and one of the world’s most spectacular coastlines
• Details of over 250 amazing places to swim, all within a 3 hour drive of the city, ideally suited to day trips and weekends away for Sydney residents and the 60 million annual tourists
• Every rock pool and tidal bath, from Jervis Bay to Newcastle. Wollemi, Kanangra-Boyd and Morton National Parks covered
• Includes information on available facilities, length and grade of walk, ascent/descent involved, closest public transport, as well as detailed directions and co-ordinates
• Includes the history of wild swimming in Sydney, social and environmental etiquette, wild swimming with children and wild swimming safety
• Perfect for the armchair traveller, the serious adventurer as well as families looking for days out 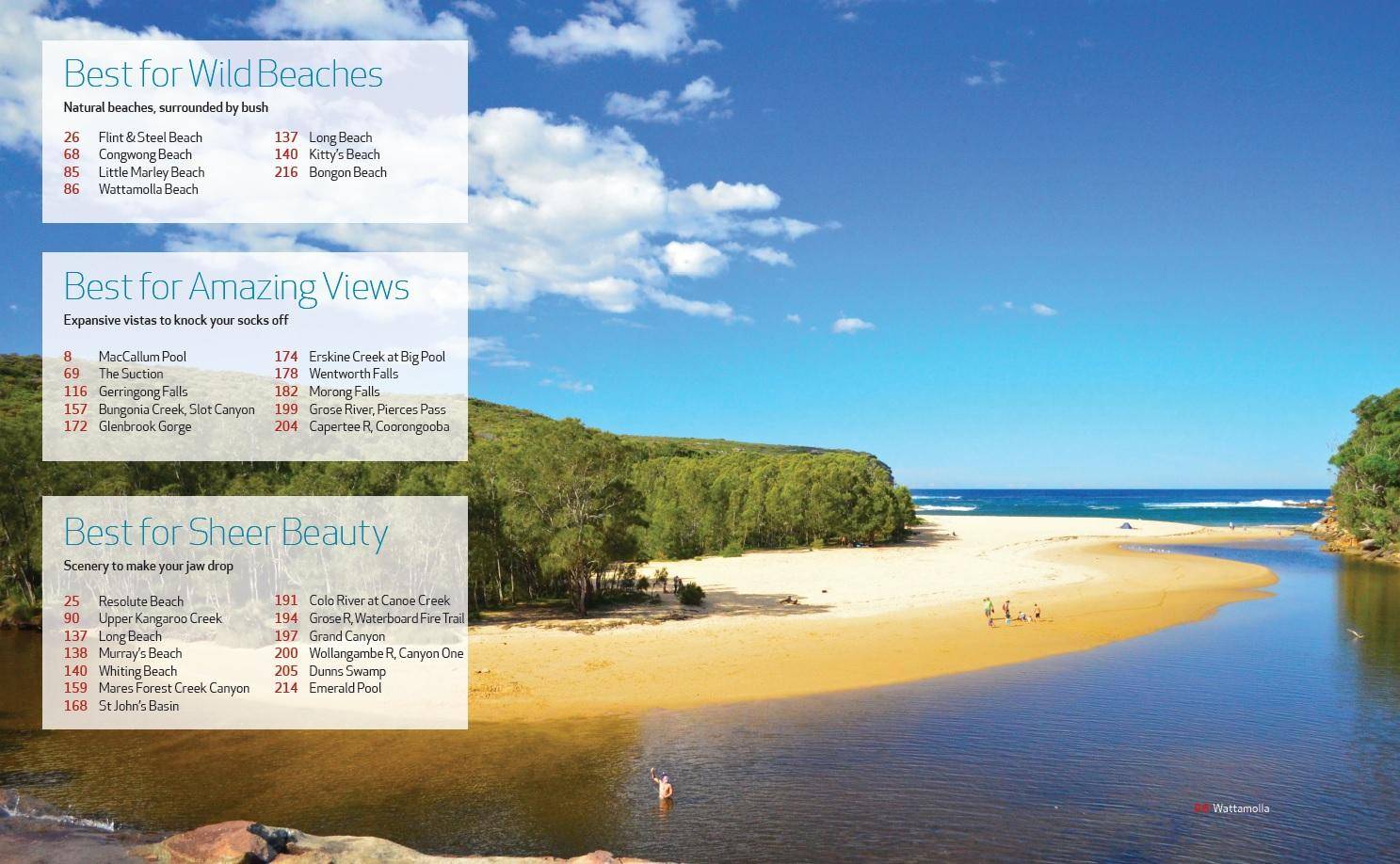 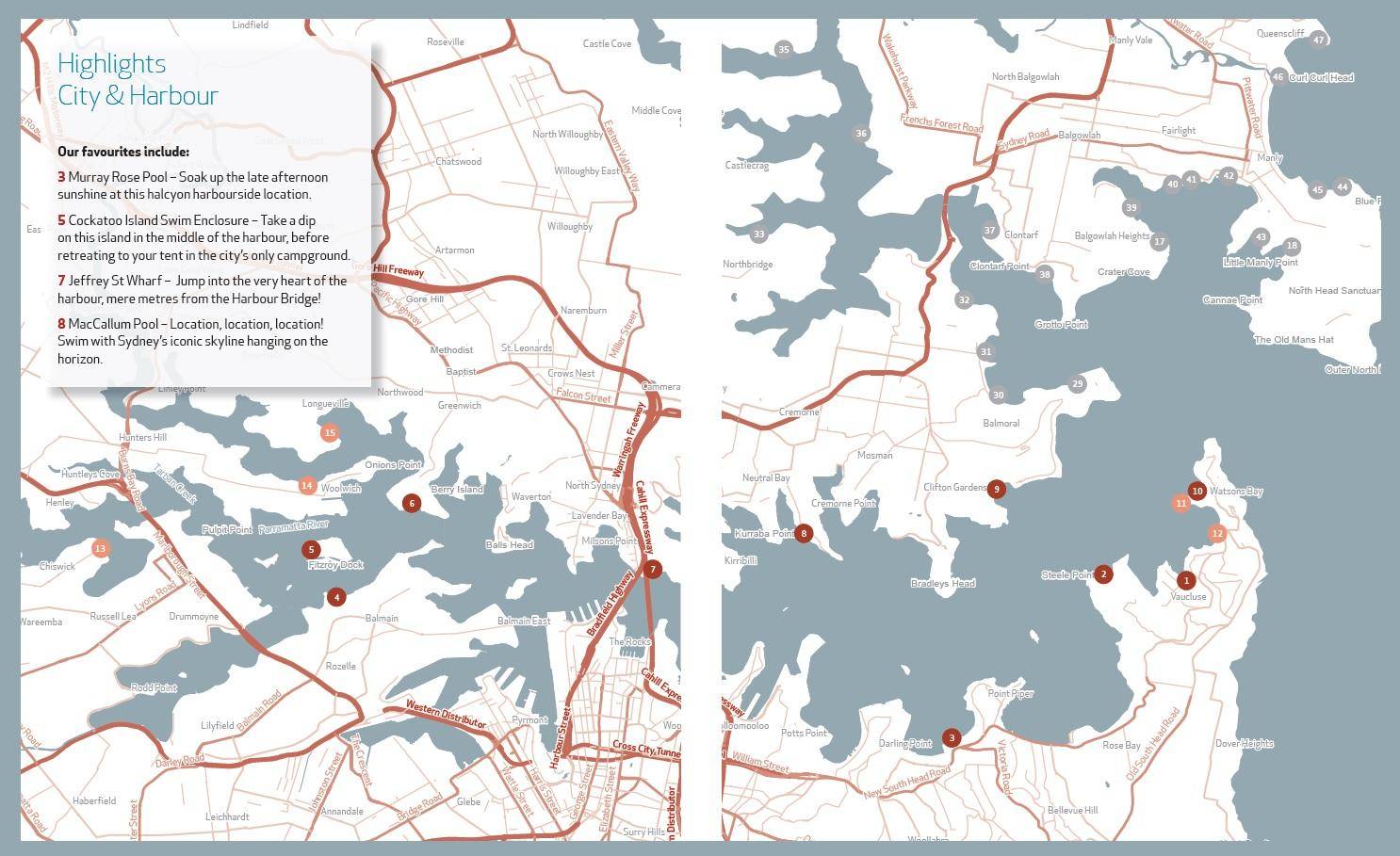 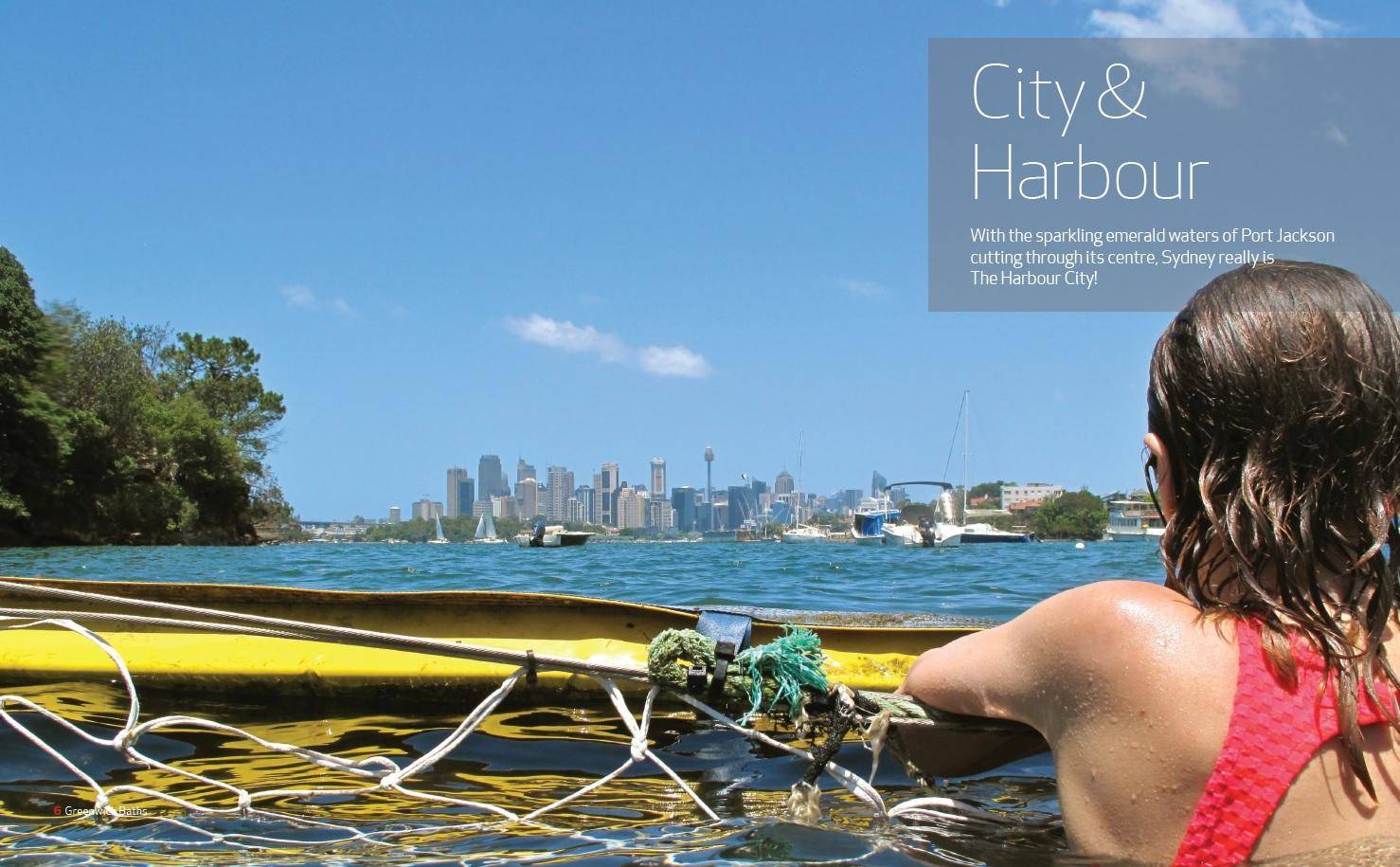 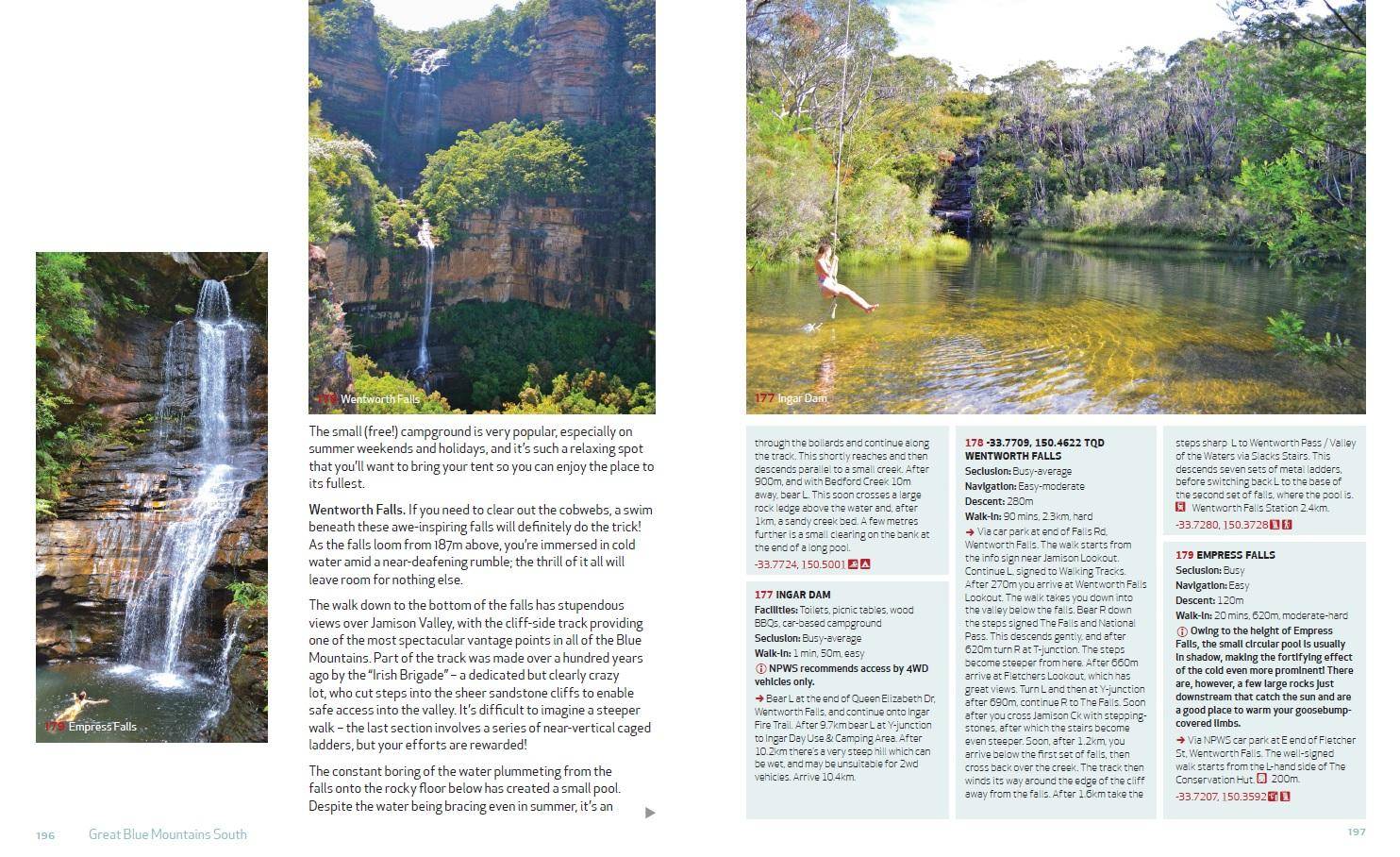 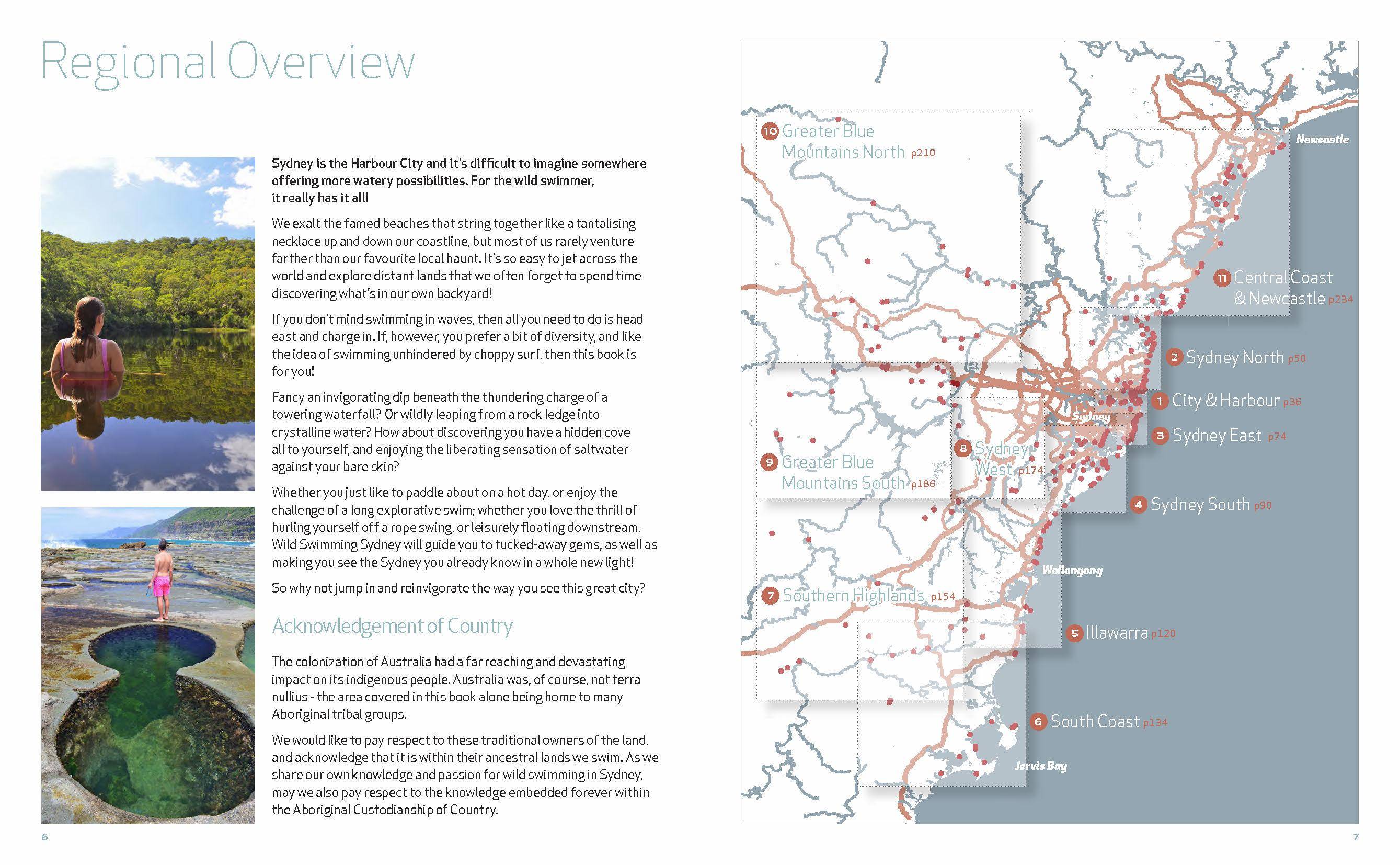 With the sparkling emerald waters of Port Jackson
cutting through its centre, Sydney really is
The Harbour City!

North of Sydney Harbour, you can have the best of
both worlds – swim in the serene waters of Middle
and North Harbours, Pittwater and Broken Bay, or
take a dip in rock pools fronting the unbridled Pacific.

Right on the doorstep of the city, 30km of coastline
with tantalising aqua water and a string of fantastic
beaches and rock pools awaits!

Bay, beach and bush – there’s something for
everyone, including the most secluded swims
within Sydney’s city limits!

This area has a magic of its own – locked
between sea and escarpment, its scenery is
striking and unforgettable.

The beaches here lay claim to having the whitest
sand in the world, and set against the area’s
impossibly clear water they certainly dazzle!

The cultivated charm of the quaint townships, rolling
farmland and vineyards for which this area is known
gives way to bush of dramatic and rugged beauty,
which abounds with memorable places to swim.

While not large in number, the swimming spots that
do exist here are big in size!

Named for the characteristic blue haze that shrouds them,
the World Heritage-listed Blue Mountains are as vast as they
are beautiful.

This is the region for the truly adventurous – for those that are
compelled to explore around the next bend in the river, and the next…

Change down a few gears and explore this sprawling
coastline and the region’s sheltered inland waters.
Here it’s easy to take it easy!

Sally Tertini spent much of her childhood exploring the bay that was her backyard in suburban Sydney, Australia. Steve Pollard grew up on a farm amongst the rolling hills of Dartmoor, UK. When they met in Sydney every spare moment was spent discovering wonderful new places to swim . After five of research they have produced this beautiful guide book.