EU customers may find it easier to buy on Amazon or Book Depository (free international shipping).

Wild Swimming Walks leads you on 28 adventures into the magical and ancient landscape of Dorset and East Devon. Follow an enchanting journey from the undercliffs and caves of the Jurassic coast to the lush meadows and vales of Dorset. Packed with all the practical information you need. 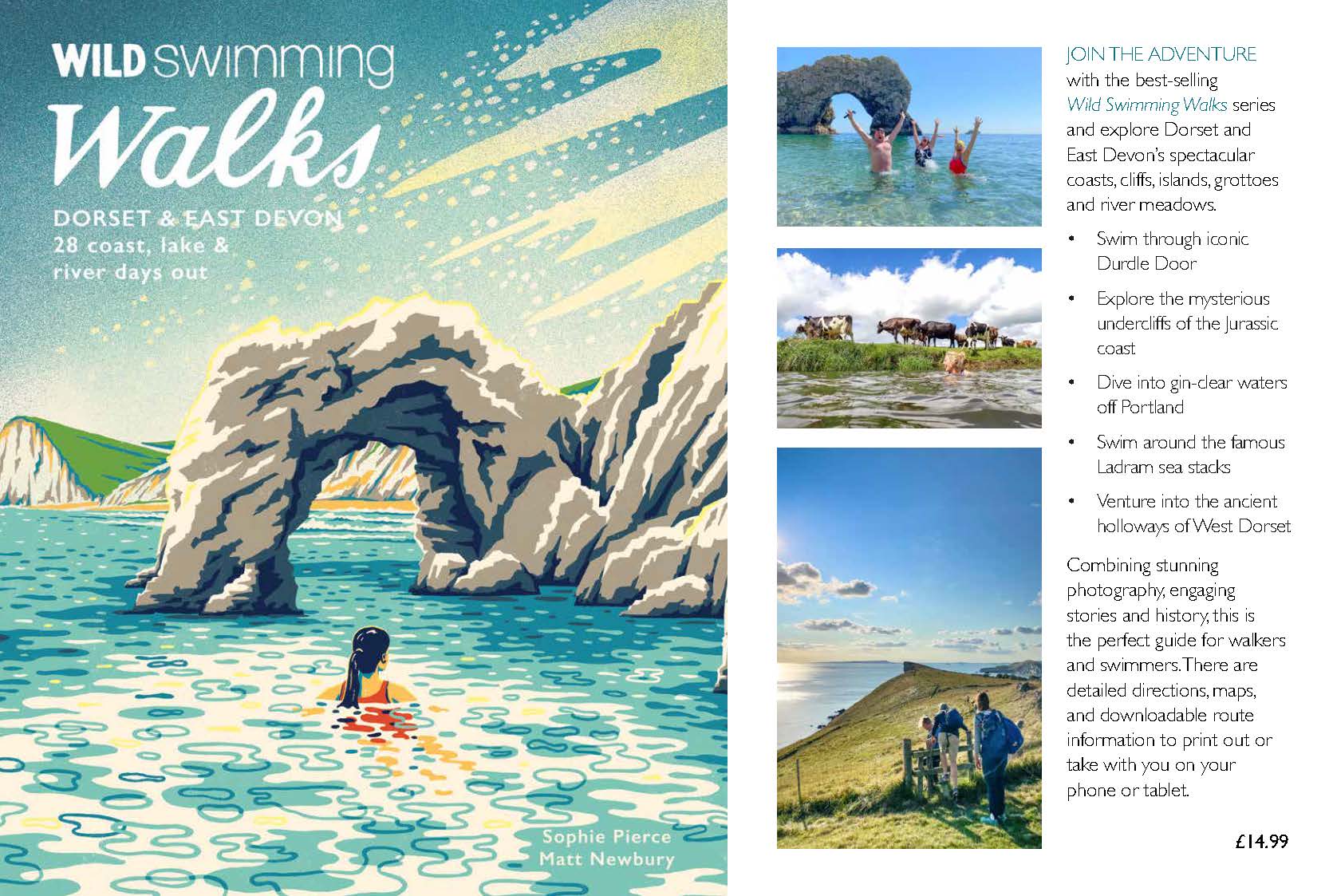 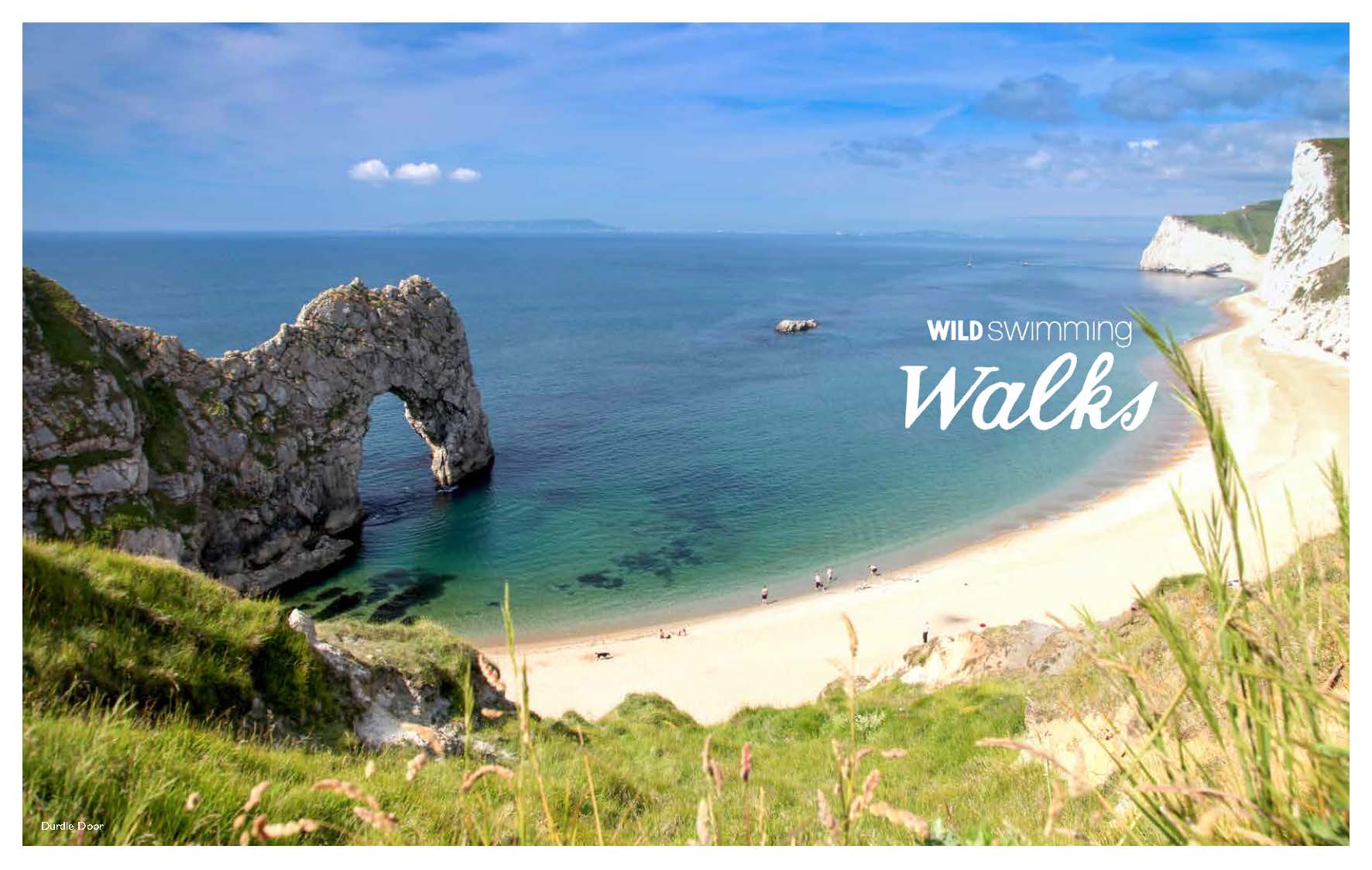 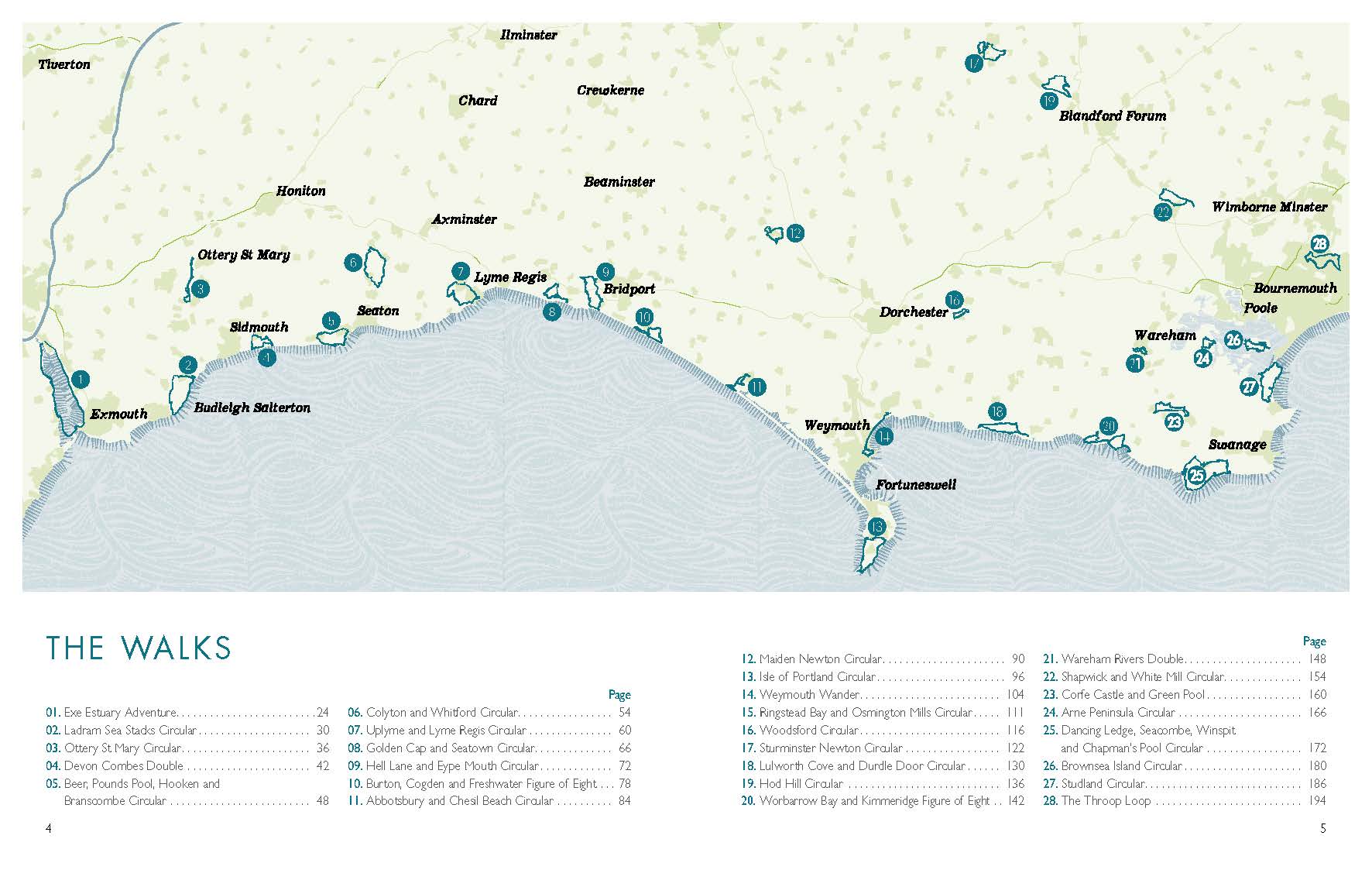 Combining stunning photography, engaging stories and history, this is the perfect guide for walkers and swimmers. There are detailed directions, maps, and downloadable route information to print out or take with you on your phone or tablet.

Matt Newbury is an author and events manager. His swimming challenges include escaping from Alcatraz and swimming to the Isle of Wight. Sophie Pierce is a writer and broadcaster who is never happier than when in the water, though she seems to have an uncanny ability to attract seals and jellyfish. They are the authors of Wild Swimming Walks Cornwall and Wild Swimming Walks Dartmoor and South Devon. 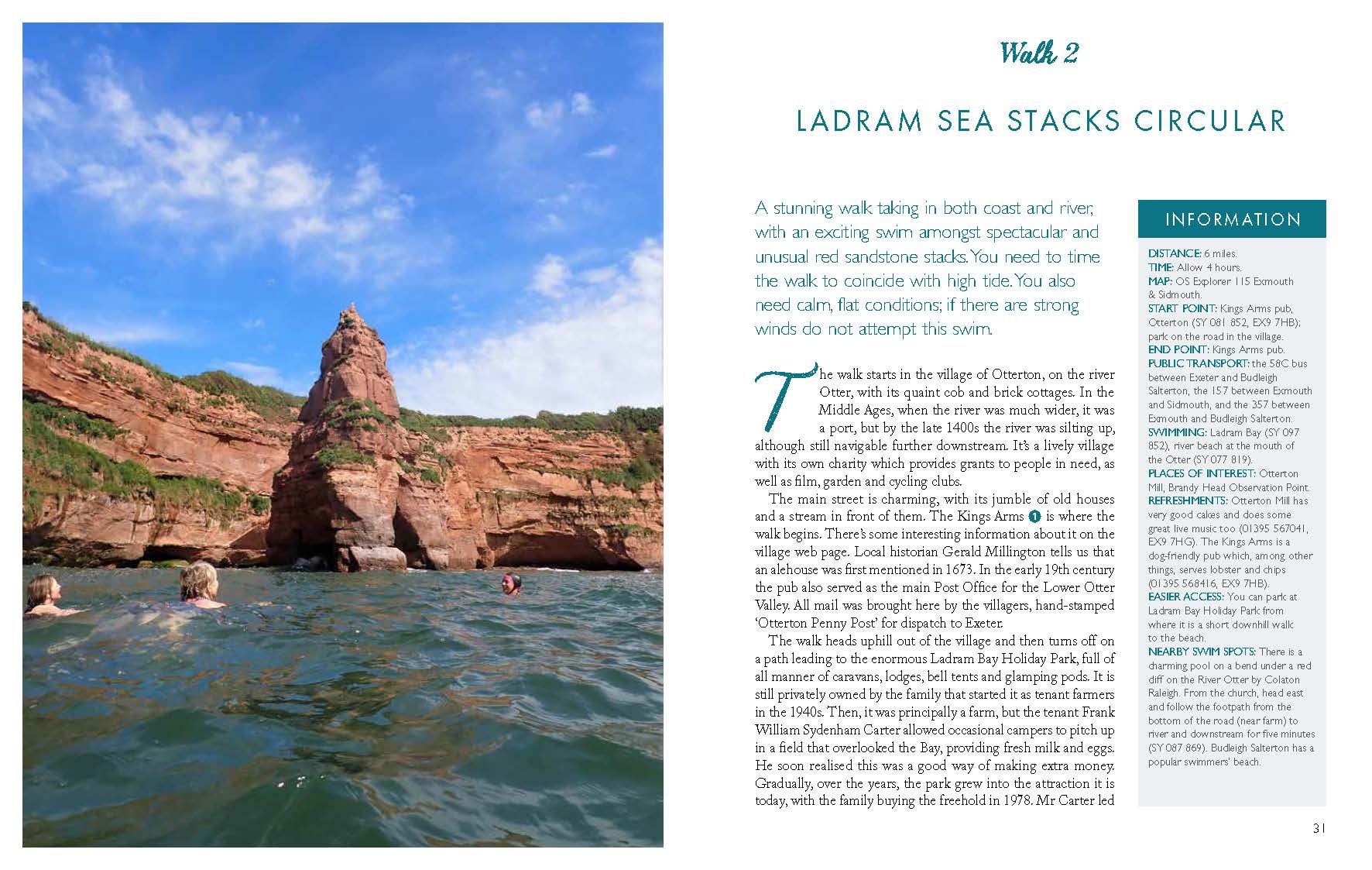 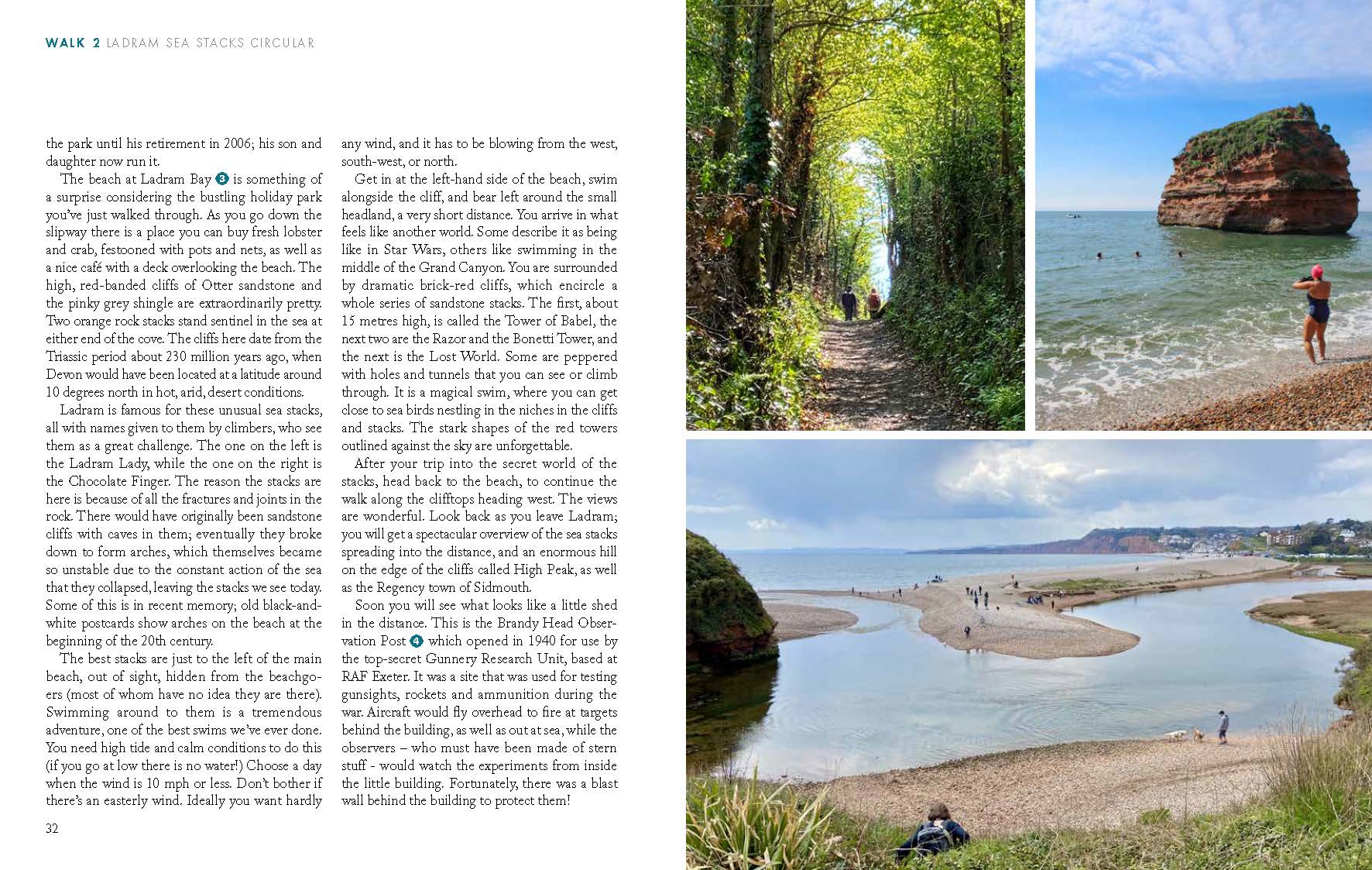 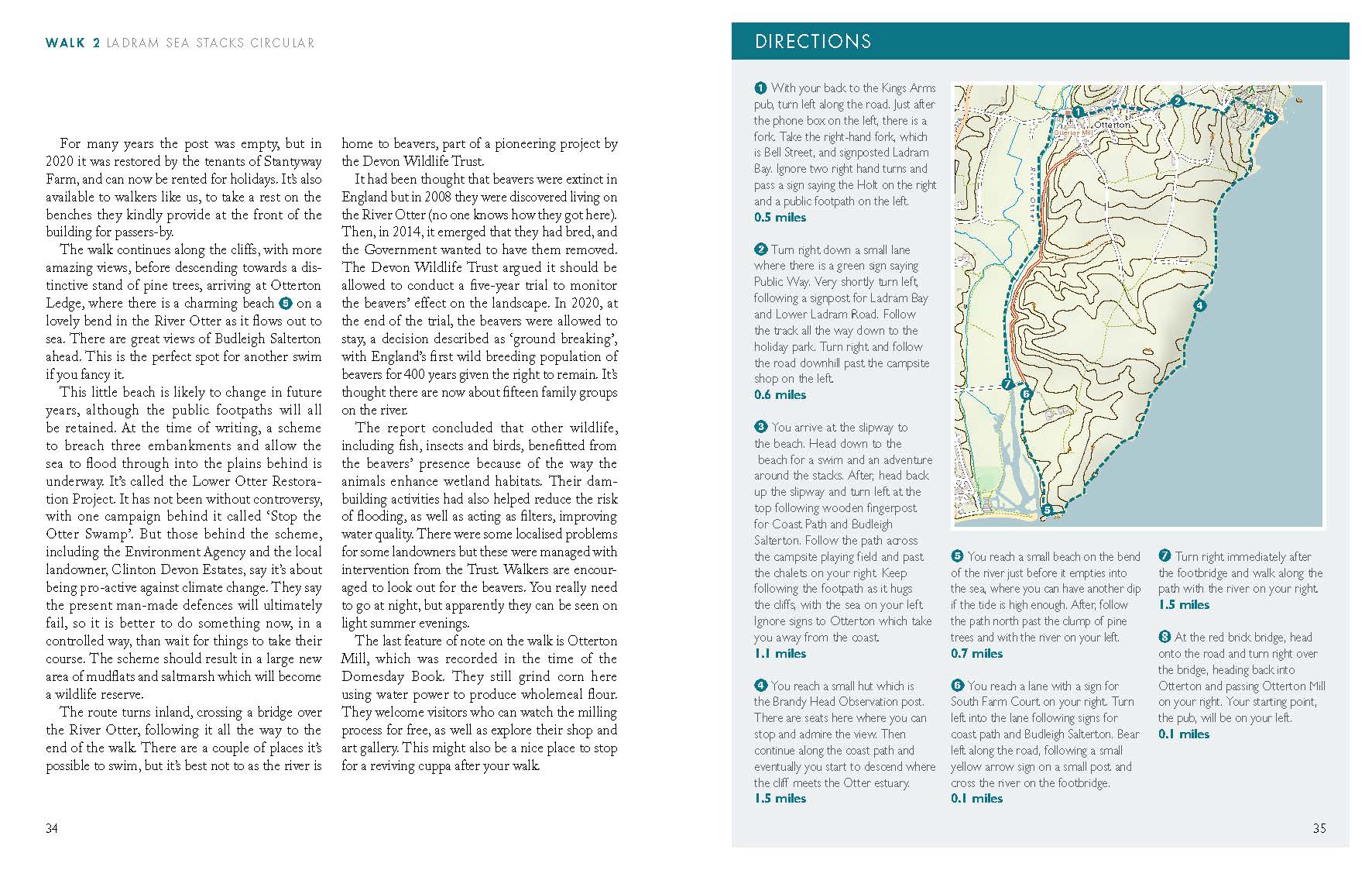 “The county of Dorset is small, but is yet so varied in its configuration as to present an epitome of the scenery of Southern England. It is a land of moods and changes that knows no monotony…”
Sir Frederick Treves, Highways and Byways in Dorset, 1906

Dorset and East Devon are amongst the most unspoilt and lovely places in England, with a great variety of distinctive landscapes, from heathland in the east, chalk downland in the middle, to limestone and sandstone hills in the west. The coastline is spectacular, containing monumental rock formations. Durdle Door, Lulworth Cove, and the red sea stacks at Ladram Bay are famous for their distinctive shapes. Then there are the terracotta cliffs of East Devon, and the white chalk cliffs at Beer. Heading east, these are succeeded by a whole series of different coastal forms, from the mudstone at Lyme Regis, to the yellow hued sandstone of Burton Bradstock, and then the famous Portland stone stretching along the Purbeck coast, with many its caves, quarries and ledges offering possibilities to the adventurous swimmer.

The diversity of these coastal environments is due to the varied geology of this part of the world. The shoreland between Exmouth and Studland is an area known internationally as the Jurassic Coast. In 2001 it was listed by UNESCO as a World Heritage Site because of the global significance of its rocks, fossils and landforms. Effectively, this whole coastline is like a sort of Bayeux Tapestry displaying, in sequence, a particular period of time in our geological history.

Away from the coast, the phrase “a quiet corner of England” comes to mind; it is a rural patchwork of hills, meadows, woods, pastures and rivers. Chalk streams meander through water meadows, while many hills are topped with the remains of Iron Age settlements and Roman forts. There are no big motorways or conurbations (apart from Poole and Bournemouth which don’t really count, being right on the edge); just pretty market towns and tiny villages, many with thatched, honey-coloured cottages.

Many of the places have quaint names, which seem lost in time. Just say aloud Child Okeford, Gussage All Saints, Compton Valence, Bishops Caundle, Cerne Abbas, Briantspuddle and even Ryme Intrinseca. The last (although he spelt it wrong) even inspired Sir John Betjeman to write the poem he called, simply, Dorset. 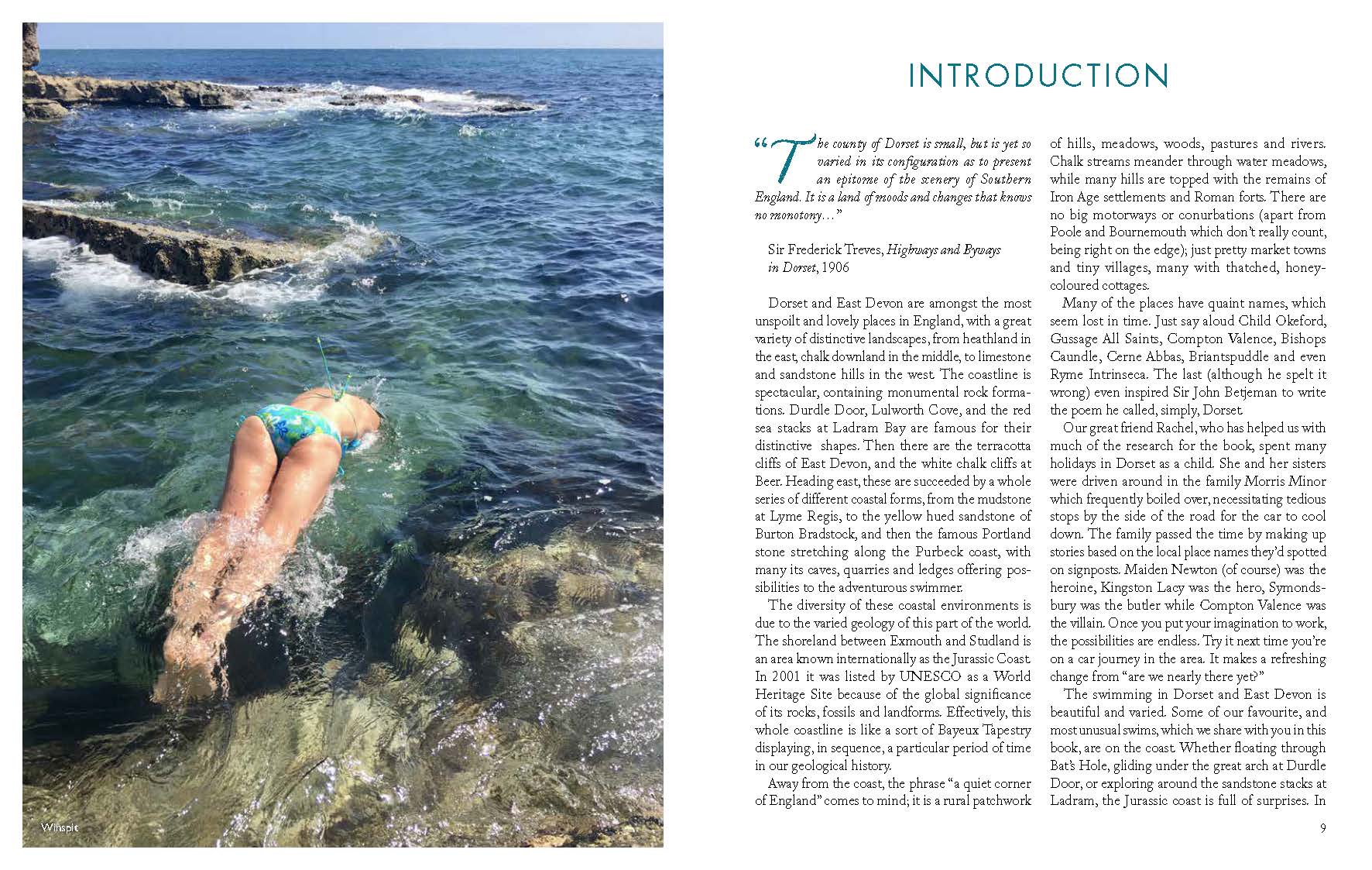 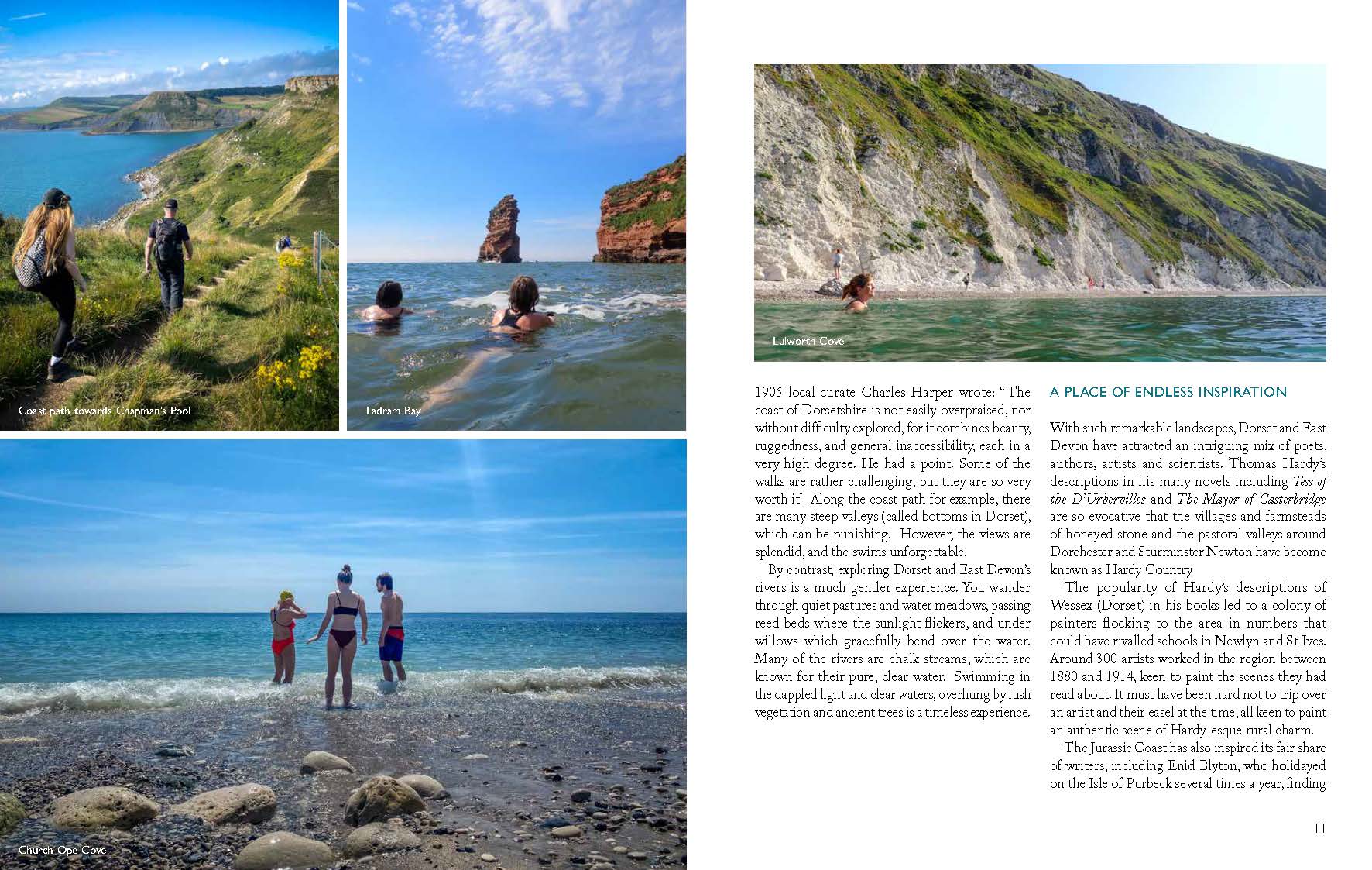 Our great friend Rachel, who has helped us with much of the research for the book, spent many holidays in Dorset as a child. She and her sisters were driven around in the family Morris Minor which frequently boiled over, necessitating tedious stops by the side of the road for the car to cool down. The family passed the time by making up stories based on the local place names they’d spotted on signposts. Maiden Newton (of course) was the heroine, Kingston Lacy was the hero, Symondsbury was the butler while Compton Valence was the villain. Once you put your imagination to work, the possibilities are endless. Try it next time you’re on a car journey in the area. It makes a refreshing change from “are we nearly there yet?”

The swimming in Dorset and East Devon is beautiful and varied. Some of our favourite, and most unusual swims, which we share with you in this book, are on the coast. Whether floating through Bat’s Hole, gliding under the great arch at Durdle Door, or exploring around the sandstone stacks at Ladram, the Jurassic coast is full of surprises. In 1905 local curate Charles Harper wrote: “The coast of Dorsetshire is not easily overpraised, nor without difficulty explored, for it combines beauty, ruggedness, and general inaccessibility, each in a very high degree. He had a point. Some of the walks are rather challenging, but they are so very worth it! Along the coast path for example, there are many steep valleys (called bottoms in Dorset), which can be punishing. However, the views are splendid, and the swims unforgettable.

By contrast, exploring Dorset and East Devon’s rivers is a much gentler experience. You wander through quiet pastures and water meadows, passing reed beds where the sunlight flickers, and under willows which gracefully bend over the water. Many of the rivers are chalk streams, which are known for their pure, clear water. Swimming in the dappled light and clear waters, overhung by lush vegetation and ancient trees is a timeless experience.

A PLACE OF ENDLESS INSPIRATION

With such remarkable landscapes, Dorset and East Devon have attracted an intriguing mix of poets, authors, artists and scientists. Thomas Hardy’s descriptions in his many novels including Tess of the D’Urbervilles and The Mayor of Casterbridge are so evocative that the villages and farmsteads of honeyed stone and the pastoral valleys around Dorchester and Sturminster Newton have become known as Hardy Country.

The popularity of Hardy’s descriptions of Wessex (Dorset) in his books led to a colony of painters flocking to the area in numbers that could have rivalled schools in Newlyn and St Ives. Around 300 artists worked in the region between 1880 and 1914, keen to paint the scenes they had read about. It must have been hard not to trip over an artist and their easel at the time, all keen to paint an authentic scene of Hardy-esque rural charm.

The Jurassic Coast has also inspired its fair share of writers, including Enid Blyton, who holidayed on the Isle of Purbeck several times a year, finding ideas for adventures in her local wanderings. Meanwhile, Chesil Beach is the setting for JM Faulkner’s Moonfleet, taking in everything you want from a classic adventure story, including smugglers, shipwrecks, ghosts and buried treasure.

The rugged and haunting coastline around Lyme Bay was to influence John Fowles, who based his masterpiece The French Lieutenant’s Woman in and around Lyme Regis. Jane Austen also wrote Persuasion when staying in Lyme Regis and, more recently, Ian McEwan set his Booker Prize shortlisted novel On Chesil Beach on the famous barrier beach. When the author admitted to taking a few pebbles away from the beach to use them as inspiration while writing the story, there was a series of protests by conservationists and a threat by the local council to fine him £2000. McEwan returned them at once, admitting he hadn’t realised he was committing a crime.

Of course, the coastline has also attracted generations of scientists like Marie Stopes and Mary Anning, a 19th century fossil collector and palaeontologist who found several dinosaur skeletons around the fossil beds near her home in Lyme Regis. Her work was to provide new evidence about prehistoric life and what we know about the history of the Earth. Generations of students studying geology and earth sciences have since travelled to this remarkable stretch of coast. In 2020, a new Fossil Collecting Code was put in place to ensure future generations can enjoy collecting rocks, fossils and minerals. It includes a ban of digging or prospecting in situ in the cliffs or failing to record your finds. 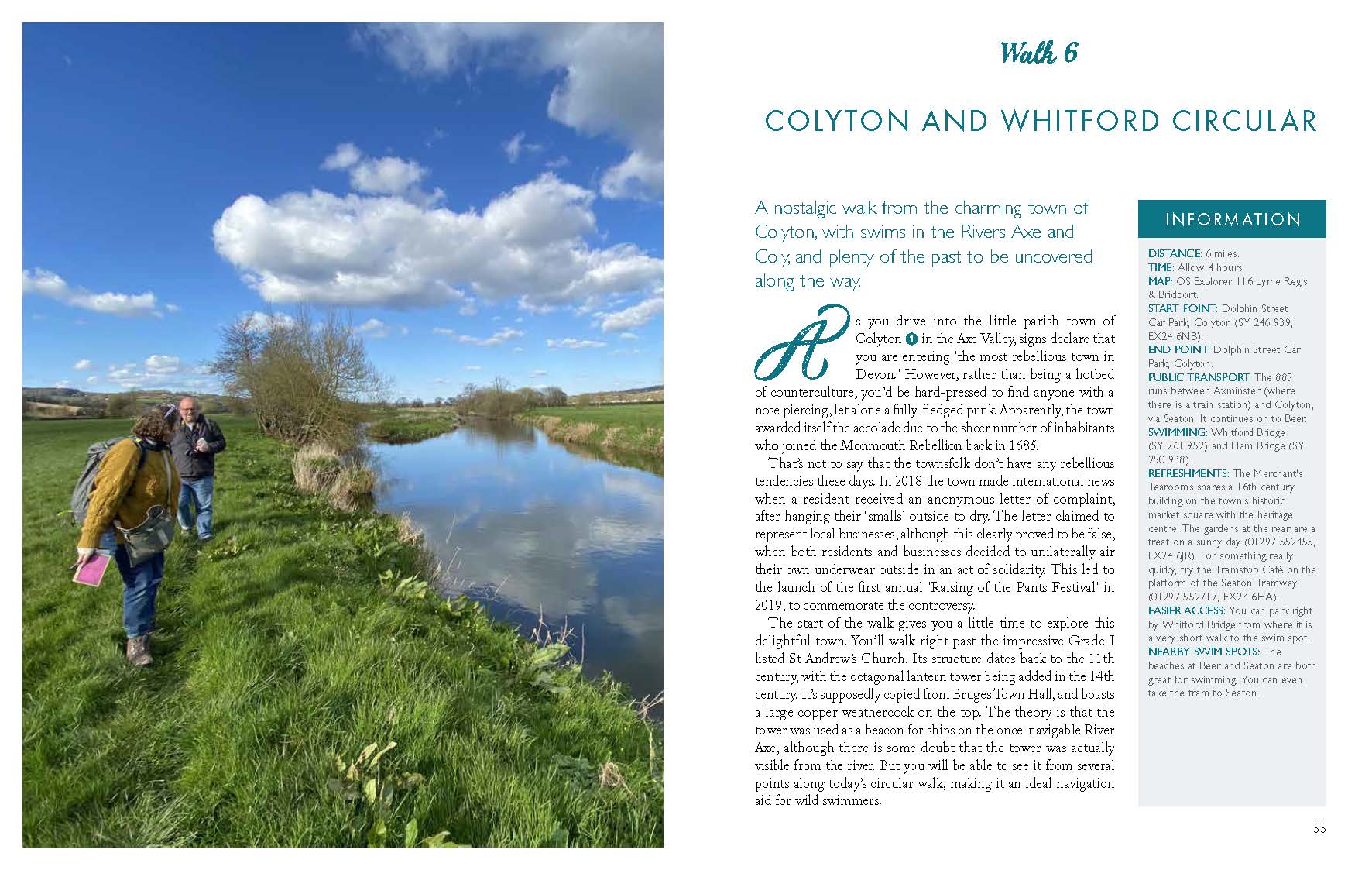 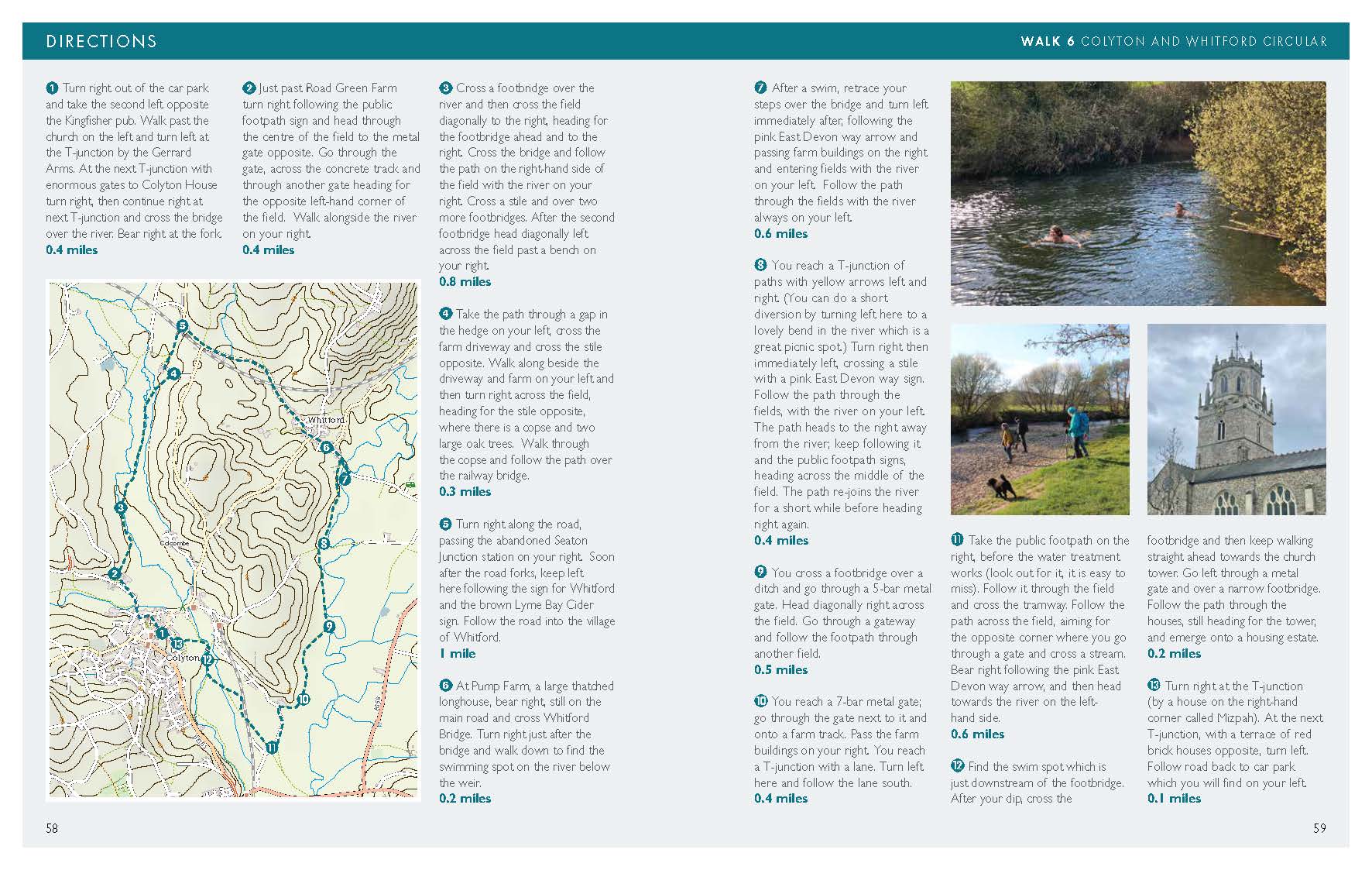 The unspoilt countryside and dramatic coastline have also attracted a number of TV and film productions over the years. The Mary Anning biopic Ammonite was filmed around Lyme Regis, Charmouth and Eype Bay, while the film adaptation of On Chesil Beach used the 17-mile beach as a location. Weymouth Harbour appears in Dunkirk, while Durdle Door has made a cameo in several blockbusters including Nanny McPhee. Scenes from Chitty Chitty Bang Bang were filmed around Abbotsbury, while Lyme Regis was also the film location of The French Lieutenant’s Woman.

A number of Hardy and Jane Austen adaptations have also been filmed on location in Dorset. However, perhaps the TV production that has done the most for tourism in recent times is Broadchurch, which starred David Tennant and Olivia Coleman. Its writer and creator, Chris Chibnall, described the show as a ‘love letter to the Jurassic Coast’. With West Bay standing in for the picturesque coastal town of Broadchurch, the popularity of the series caused a dramatic increase in trade for tourism related businesses.

As well as celebrities, this stretch of coast has attracted royal wild swimmers. When George III was becoming increasingly unstable, triggering the Regency crisis in 1788-89, it was suggested that he sample the curative powers of seawater bathing. Weymouth was chosen as the best place for the King to convalesce and he took to the waters on a daily basis. The national anthem would be played as he entered the sea, with a band hiding in a neighbouring bathing machine on at least one occasion. We’d quite like something similar to happen every time we go for a dip and we will be speaking to the Weymouth Concert Brass Band at the earliest opportunity.

Through this book, we hope to inspire you to explore this stunning area, having your own fair share of fun and adventures along the way. We had an incredible time researching the walks in this book and we feel so privileged to have captured so many amazing memories along the way. The areas we have walked and the places we have swum have proved endlessly surprising and inspirational. And the evenings we have spent with a glass of wine under the stars or in a cosy pub reminiscing about the day’s adventures have been equally enjoyable.

Sometimes our field trips went wrong, with routes no longer accessible due to cliff falls or other obstructions. While we have tried to ensure the walks included are as accurate as possible, things do change all of the time. If you do come across any access issues, do let us know and we will ensure these are updated in future editions. And do share any pictures of your own adventures with us, we’d love to see them.

In the meantime, we do hope you enjoy the book as much as we enjoyed putting it together. And we look forward to bumping into you on a footpath or on a riverbank, in a sea pool or perhaps by a lake. Happy swimming.