Warning: ftp_fget() expects parameter 1 to be resource, null given in /homepages/28/d194094988/htdocs/wildthingspublishing1/wp-admin/includes/class-wp-filesystem-ftpext.php on line 146
 The Best of Bramleys - Wild Things Publishing Skip to content 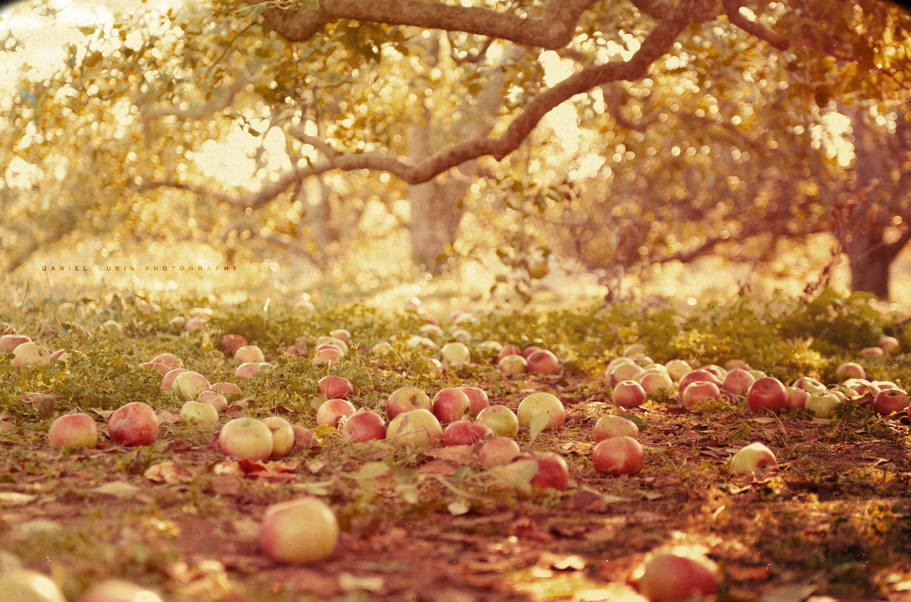 Apparently it’s Bramley Apple Week (2nd-8th February) – a celebration of the humble Bramley apple launched over two decades ago. With freezers and pantries across Great Britain (or at least Somerset and Herefordshire) stocked full of delicious fruit picked in the Autumn, this could be a great opportunity to use some of them up!

Here at the Wild Things office , we thought we’d take full advantage and mark the occasion with some delicious baked goodness!

The first Bramley tree grew from pips planted by a young girl, Mary Ann Brailsford, in her garden in Nottinghamshire back in 1809 – although it wasn’t until a local butcher Matthew Bramley, who bought the garden and sold the seedlings in 1856, that they were given their name. Remarkably, the original Bramley apple tree continues to bear fruit to this day.

The old nickname for the Bramley was “The King of Covent Garden”, which still exists today in the New Covent Garden Market, where specialist fruit wholesales offer Bramleys for 12 months of the year. 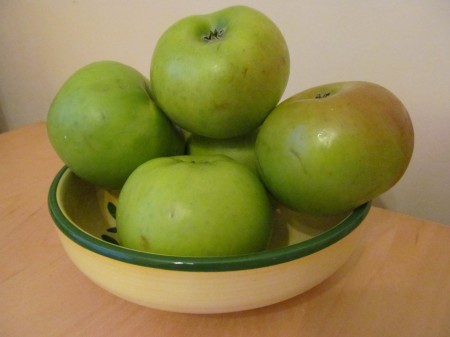 With just five Bramley apples we were apple to make three filling dishes – and there are a huge variety of both sweet and savoury meals you can create with this versatile fruit. 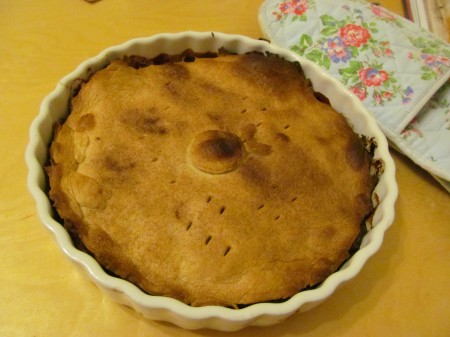 A true classic, especially when served with fresh cream (or even custard in the winter!). A very simple dish to make, you can add extra fruit (rhubarb, berries) or cinnamon, as we did, to enhance the flavours.

For the filling
3 large Bramley cooking aplles, chopped, stewed and cooled
Sugar to taste
Caster sugar, to serve
We added some cinnamon and raisins to ours too.

Method
Preheat the oven to 200C/400F/Gas 6.
Sieve the flour and salt into a bowl.
Rub in the margarine or butter until the mixture resembles fine breadcrumbs.
Add the cold water to the flour mixture. Using a knife, mix the water into the flour, using your hand to firm up the mixture. The pastry should be of an even colour and suitable consistency for rolling.
Divide the pastry into two halves. Take one half and roll it out so that it is big enough to cover a 20cm/8in enamel or aluminium plate. Trim the edges with a knife using the edge of the plate as your guide.
Cover the pastry with the stewed apples and sprinkle with sugar to taste.
Roll out the other half of the pastry. Moisten the edge of the bottom layer of pastry and place the second piece on top.
Press down on the pastry edges, making sure that they are properly sealed. Trim off any excess pastry with a knife in a downward motion, again using the plate as your guide.
Flute the edges with a pinching action using your fingers and thumb.
Prick the surface of the pastry lightly before placing the pie in the oven. Cook for 20-30 minutes.

When the pie is cooked it should move slightly on the plate when gently shaken.

Slide on to a serving plate, dust with caster sugar and serve.

Baked Apple with Fruit and Nuts 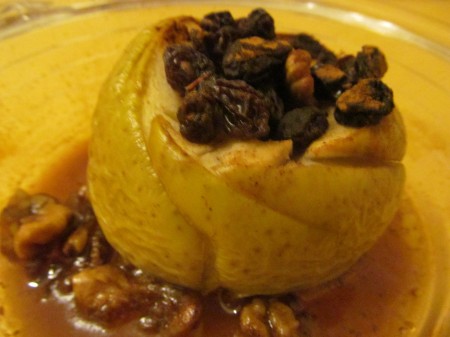 A warming bowl of spicy, nutty goodness! Simply leave this to cook in the oven and you are treated to what feels like a naughty dessert, but one that is actually full of goodness.

Ingredients (per serving):
I Bramley apple per person, with the core removed
A handful of nuts (pecans, flaked almonds and walnuts are good)
A handful of raisins
A sprinkling of brown sugar and cinnamon
A splash of apple juice

Method
Pre-heat the oven to 190C/375F/Gas 5.
Place your Bramley apple in a buttered baking dish. Push your nuts and raisins down inside the empty core of the apple and sprinkle a bit of sugar and cinnamon on top. Pour the apple juice over the fruit and place in the oven for 45-60 minutes. We served ours with a spoonful of Greek yoghurt. 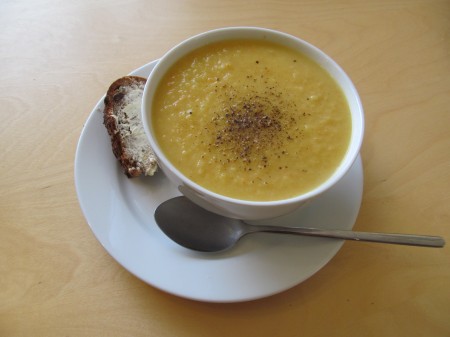 Method:
Heat the olive oil in a large pan or pot. Chop the onion and garlic and add to the pan on a low heat. Chop the carrot and the celery and add those too (we also threw in some fennel we had in the fridge). After a few minutes, add the chopped parsnips and Bramley apple too.
Once the vegetables have had a chance to soften in the pan, add your vegetable stock and bring to the boil, before simmering for around 15 minutes on a lower heat.
Use a hand-held blender to squash everything together, until you have a nice, thick texture. Season to taste – and you can also add a dash of cream too. We served ours with some homemade wholemeal bread. 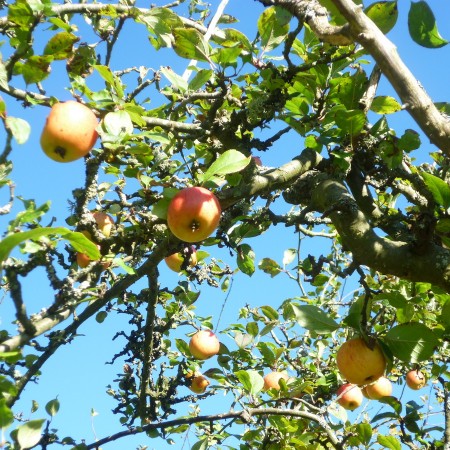