To celebrate St David’s Day (Sunday 1st March) here’s our round-up of the best places to go wild in Wales: 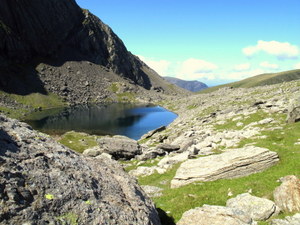 Swimming over the iconic massif of Snowdon, with its pyramid pinnacle and stunning views, is the ultimate swim tour, with a range of dips from waterfall plunge pools to dramatic tarns.

The route begins at Llyn Dinas under the precipitous rocky knoll of Dinas Emrys, a fifth-century castle stronghold where the original red dragon of Wales emerged from a pool and defeated the white dragon of the Britons. This crag-bounded lake makes an impressive and historic starting point and is lined with gnarled oaks, craggy outcrops and parched gorse. Two miles up the road, at Nantgwynant, the Watkins Path begins. Within half an hour a series of large plunge pools and waterfalls appears on the right. Cascading down the mountain, deep blue and decked with rowan, this sunny, south-facing stream is popular with Snowdon walkers. 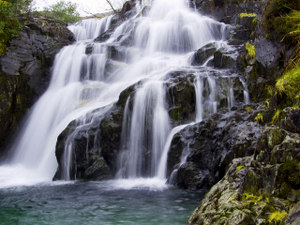 The path turns and rises steeply up to the southern ridge of Snowdon and then on to the summit before heading over onto the Llanberis path that follows the course of the railway. From a mile below the summit you can drop down to the right, to the tiny tarn of Llyn Glas with its magical little wooded island. The tarn overlooks the Llanberis pass and the sea but it’s a very rough, steep scramble (and 300-metre descent) to the plateau on which it’s perched. Alternatively turn off left instead, to Llyn Du’r Arddu, a deep blue lake, stained by copper and set under the craggy cliffs of ‘Cloggie’ (Clogwyn du’r Arddu).

From here on down the River Arddu drains the heather moors for three miles and the path continues, tracking the railway, past Hebron mountain railway station. The road heads to the tree-line where you’ll find another series of amazing plunge pools cascading into Llanberis. You’re almost home and after such an expedition you deserve a night at the classic mountain hotel of Pen-y-Gwryd, high on Pen-y- Pass. 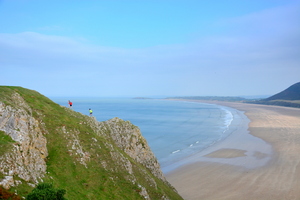 With its amazing diversity of landscapes and wild places, from the rolling grassy valleys and spectacular sandy beaches of the south, through the remote tranquillity of the Black Mountains to the rugged peaks of Snowdonia and rocky coastal path, Wales is a fantastic place to run.

The Gower section of the Wales Coast Path stretches for 38 miles from Mumbles to Crofty, providing fantastic and varying running, with the only steep, scrambly sections being those around Rhossili. There are also several long-distancepaths, including the Gower Way, a 35-mile waymarked route which bisects the Gower Peninsula, running from Rhossili inland to Penlle’r Castell. It explores many of the lesser-known parts of Gower, from the coast to rolling green hills and tranquil forests and passing many historical sites on the way. 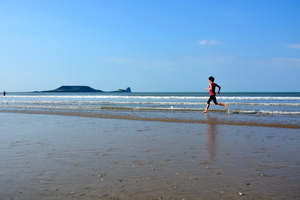 There are many road and off-road races around Gower taking in the wonderful variety of scenery and terrain which both challenges and delights runners. The Endurancelife Coastal Trail Series Gower stage, held in November each year, is certainly one of the toughest and most scenic races in the series, with distances from 10km up to ultramarathon. It is a fantastic place for multi-sport racing too, with its fine mix of trails, quiet roads and accessible sea for swimming or surfing.

The Gower Triathlon, organised by Activity Wales Events, who also stage the tough annual Wales Marathon in Tenby, is a classic on the triathlon calendar and a great way to finish off the season, being held in September at Port Eynon. The 0.9 mile swim in the bay at the blue flag beach of Port Eynon is a particular highlight. 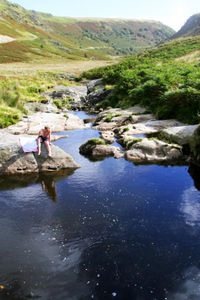 Wolf’s Leap is a tight rocky canyon on the River Irfon set above a series of deep river pools. Rugged and beautiful, the valley winds its ways down from the rooftop wilds of central Wales and is a sanctuary for the once rare red kite. The canyon takes its name from the last wolf in Wales, allegedly seen jumping to freedom here in the sixteenth century.

The River Irfon appears as you descend down the Devil’s Staircase, the landscape opening up into a wide crag-edged valley. This narrow crack of churning water has cut deep down into the rock and eroded pot holes and chambers. The pool is small but deep with great sloping slabs of Cambrian rock, some of the oldest in the world. Well known as a swimming river, the Irfon was once used by local churches as a place for baptisms.  Downstream, the tiny town of Llanwrtyd Wells was once famous for its natural springs. These days they have fallen into decline but in an effort to diversify and attract tourists, the town has introduced the world championship for ‘bog snorkelling’. Competitors have to complete two lengths of a 60-metre trench cut through the peat bogs of Waen Rhydd in the quickest possible time, wearing snorkels and flippers, but without using any conventional swimming strokes. A triathlon has also been introduced, as well as mountain-bike bog snorkelling that involves cycling underwater through the trench. With over a hundred participants each year, entries have included snorkellers from Russia, Australia, New Zealand and Ireland. 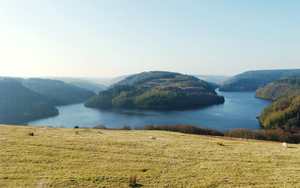 At the southern end of the Cambrians is the Black Mountain, the most western end of the Brecon Beacons National Park. In this area of sinkholes and limestone karst, Llyn y Fan Fach is one of two high tarns that sit beneath the peak. For many centuries legend has told of a ‘Lady of the Lake’ who would rise shimmering on the first Sunday of August at two o’clock in the afternoon. Apparently she married a mortal, a nearby farmer, but returned to the lake along with his cattle after he hit her three times. In Victorian times the tale was so well known that whole families would climb up the mountain in the summer sun in the hope that she would appear.