Daniel Start, author of a new book Hidden Beaches, shares his all time favourite secret coves to escape the crowds this summer, and perhaps indulge a spot of wild swimming. 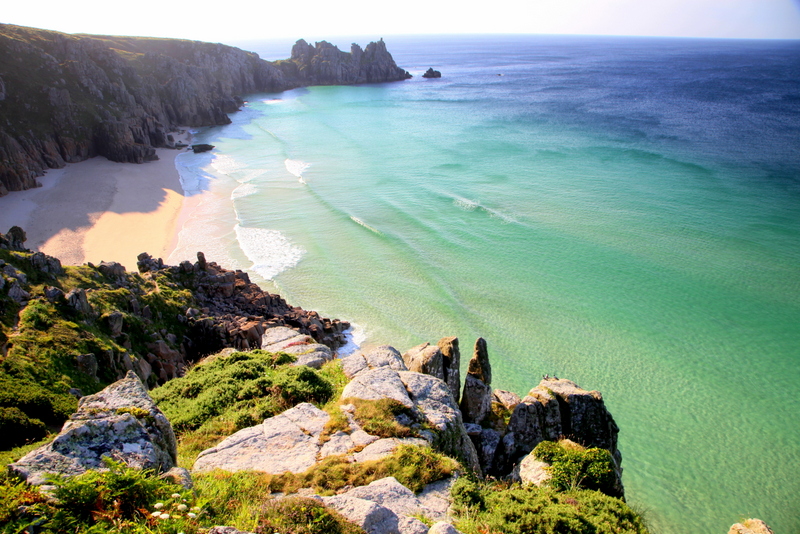 Britain has one of the most beautiful coastlines in the world, and is blessed with thousands of coves and inlets, many secret and rarely visited. I spent the best parts of my childhood in far west Cornwall, and summers were filled with rocky scrambles and Robinson Crusoe camping in the sand. In my adult years, these childhood memories wouldn’t leave me, and I yearned for the sea, so I finally quit my office job and embarked on a five year project to chart the most beautiful of these coves in other parts of Britain. Using aerial photographs and satellite photographs, walking hundreds of miles a week, and talking to local, surfers and fishermen, I sought out the perfect slices of secret white sand, the most incredible places along our coast, from sea caverns to rock pools. 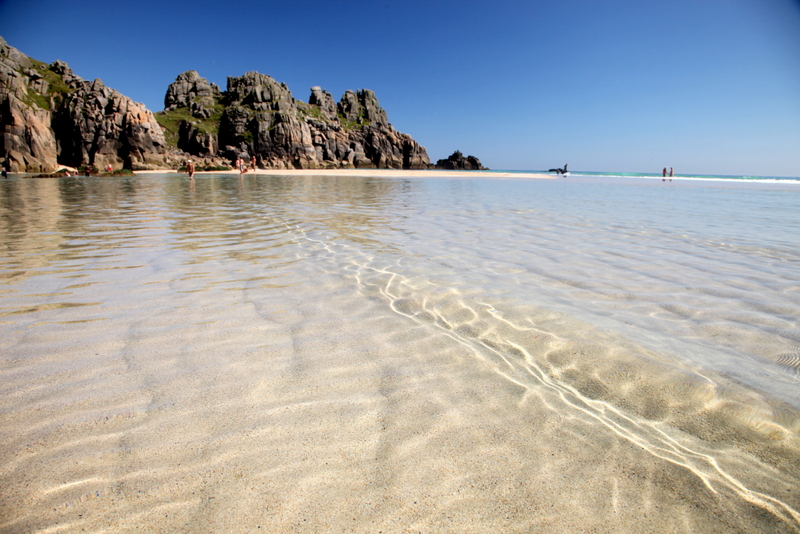 Perhaps the most beautiful beach in Cornwall. Framed by Logan’s Rock on one side and the Minack cliff-top theatre on the other, it’s a tricky scramble down, but at low tide off shore sand bars form with shallow lagoons which warm in the sun. Above there is a basic cliff top campsite with superb views, plus a lovely café. Turn off 2 miles before Porthcurno and pass the Logan Rock Inn (TR19 6LG, 01736 810495). 20 mins, 50.0441, -5.6424 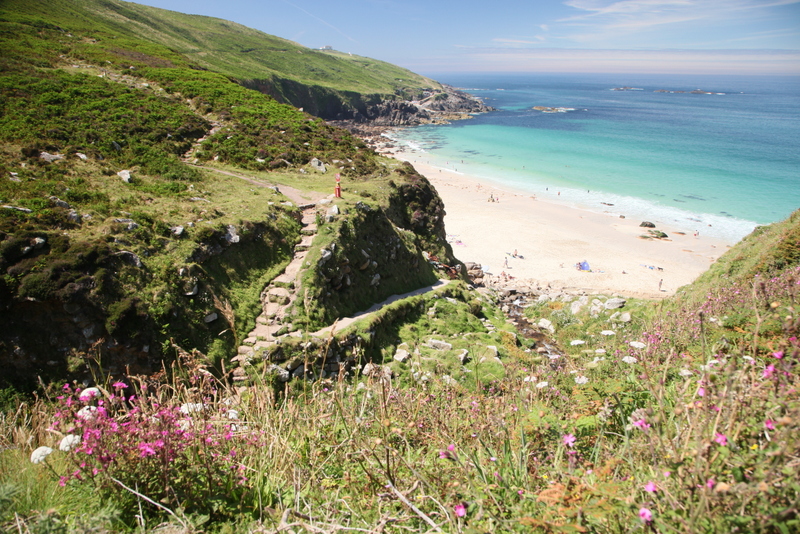 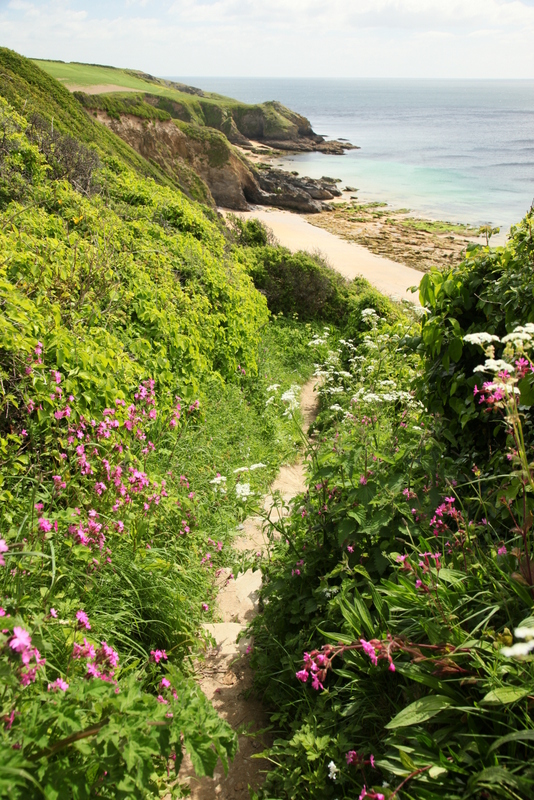 Fabulous long wild sand beach with fantastic rock pools on a the beautiful ‘lost-in-time’ peninsula of Roseland (check out the tropical gardens of St Just church). Explore to the north of the bay for the secret cove. By the turn-off to Bohortha and find path on right to cliff. 5 mins, 50.1494, -4.9919 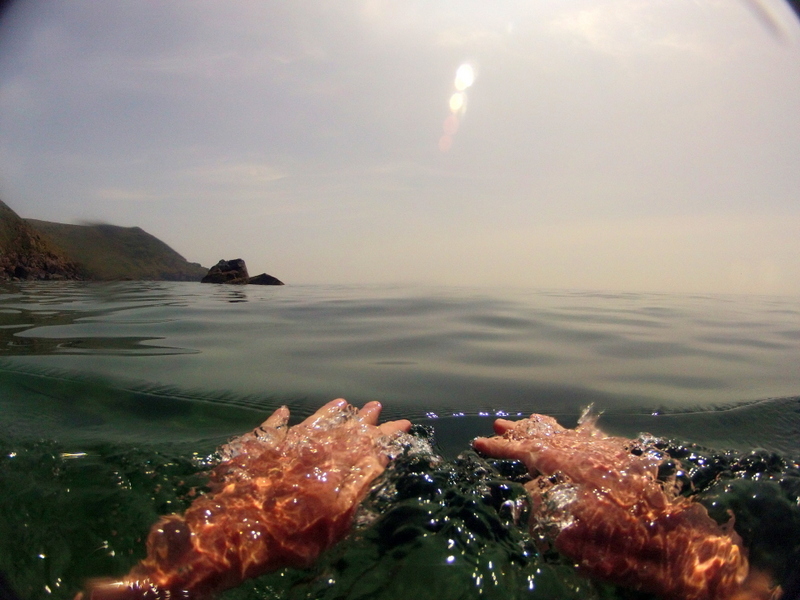 I love this cove for the passage hewn from rocks, the little waterfall and tiny Palace Cove, five minutes further west along the coast, where steps have been carved from the rocks to create a tiny quay. It’s a beautiful spring walk down a pretty coombe lined with wild garlic and bluebells in spring. Excellent National Trust campsite in the village (Highertown Farm PL13 2PX, 01208 265211) and cream teas at Barton Farm (PL13 2PU, 01503 272293). 15 mins, 50.3319, -4.5785 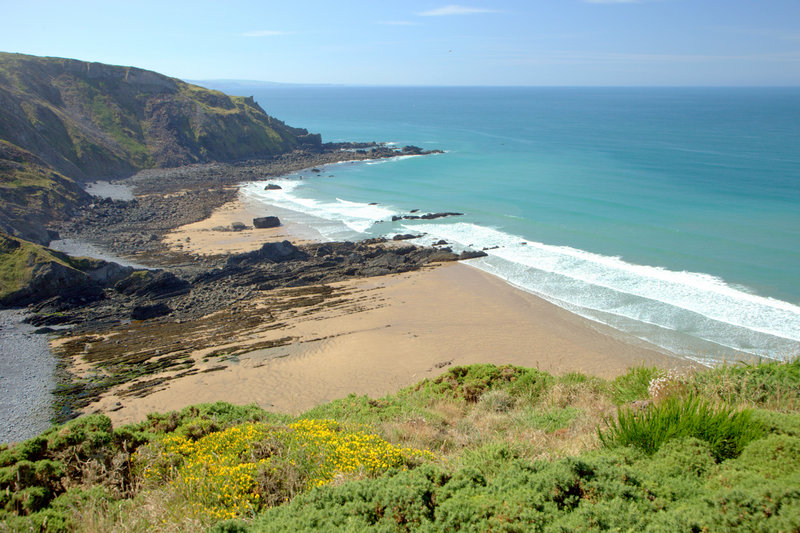 A fantastic and remote low tide sand beach. The long descent keeps most away. It’s situated below the somewhat eerie GCHQ ‘listening station’. My favourite approach is along the cliff path from Duckpool two miles to the south (this is itself a rather wonderful low tide sandy beach with freshwater pool and stream, and ice cream van – perfect for families). 20 mins, 50.8918, -4.5612 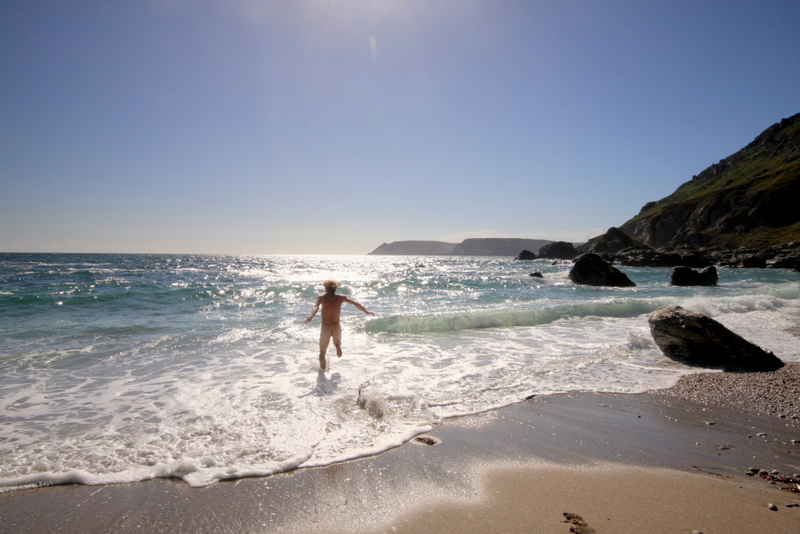 The most beautiful of a trio of wonderful white coves along this dramatic and little known stretch of coast. The beach surface is made up of tiny round white beads of quartz, smooth and smooth under foot. Bronze Age field ridges line the fields above. A track leads down the cliff-side and you drop on to the beach with the help of a rope. 20 mins, 50.2143, -3.7368 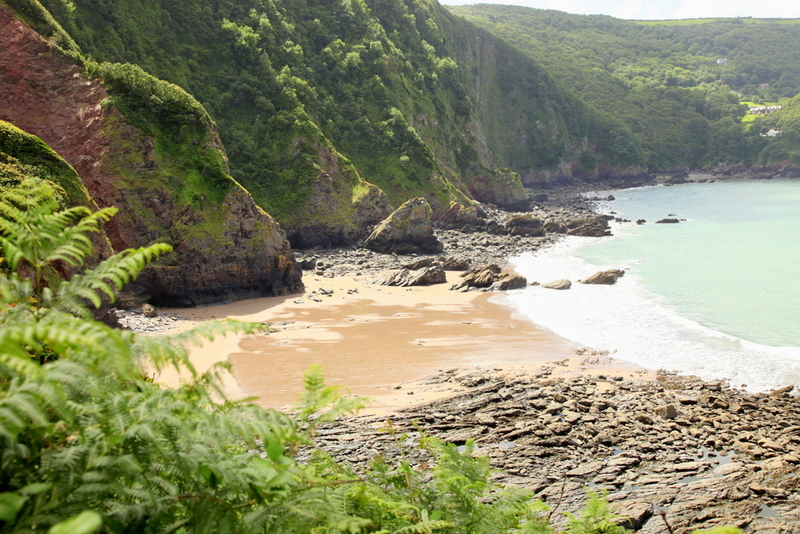 Perhaps the most secret sand beach on the wild, high coastline of Exmoore. You will need to follow the hedge tunnel and climb down with the help of the ropes and cables that kindly locals have left. Just west of Lee Bay, beyond Valley of the Rocks, Lynton. 15 mins, 51.2267, -3.8833 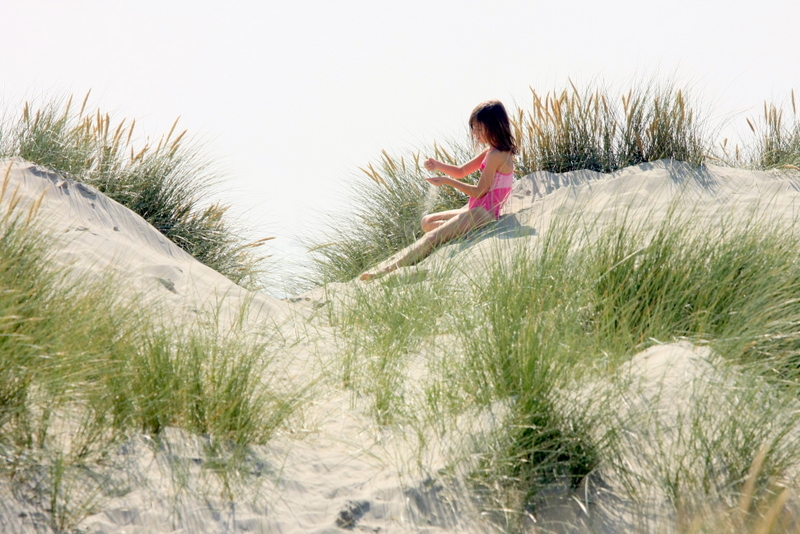 This is Norfolk’s desert island beach. Extending for miles, as far as Holkham, merging into forest and white sand as far as the eye can see. At Gun Hill there are sand hills and marram grass and views across the narrow channel to Scolt Head Island, a fabulous uninhabited nature reserve which is also a tidal island. 20 minute walk out from Burnham Overy Staithe. 52.97822, 0.75922 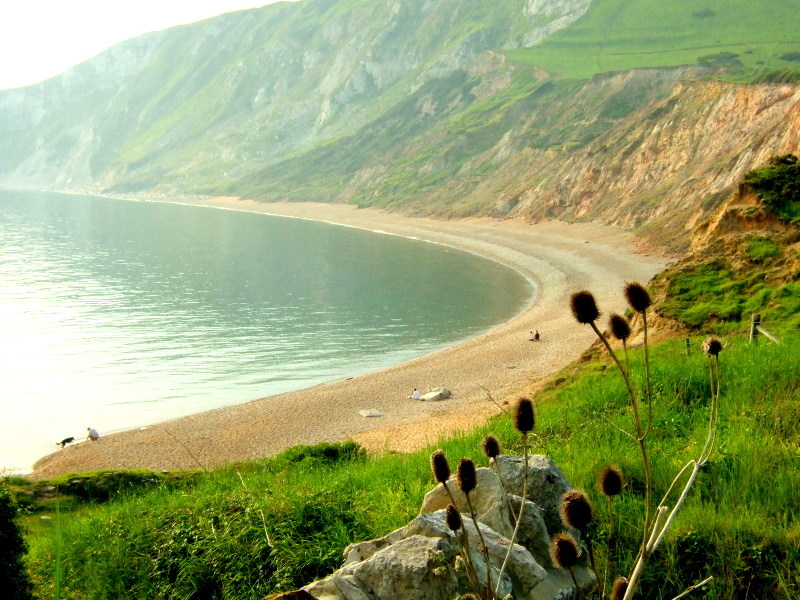 A wonderful half moon bay with a perfect crescent of sand, set beneath ancient woods in remotest Dorset. There are sea caves and a grassy hill fort to climb and you can also explore ruined village of Tyneham. Between East Lulworth and Corfe Castle but closed on army firing days. 20 mins, 50.6170, -2.1844 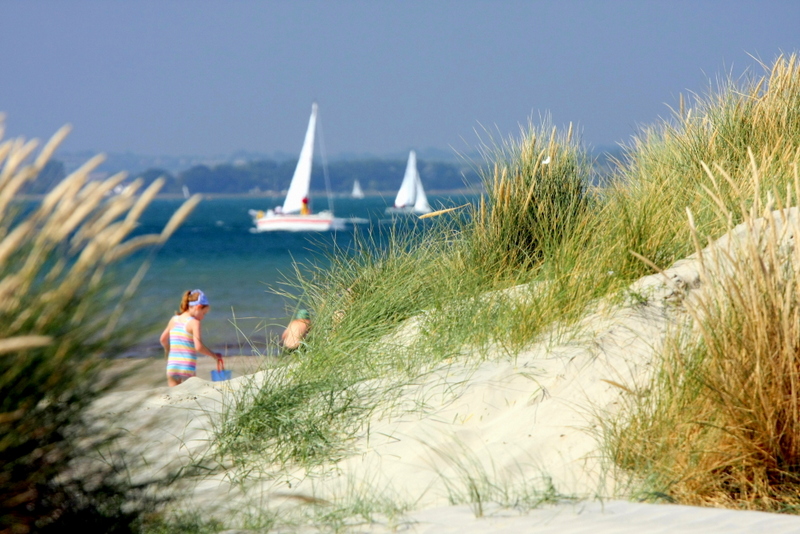 West Wittering is well known but continue on to the long sandy isthmus of East Head to escape the crowds. With perfect white sands and a great expanses of dunes for playing hide and seek, there are also shallow mud lagoons which warm in the sun and are excellent for mud fights and slides. Best to follow the 11-mile Salterns cycle route across fields from Chichester train station 20 mins, 50.7892, -0.9134 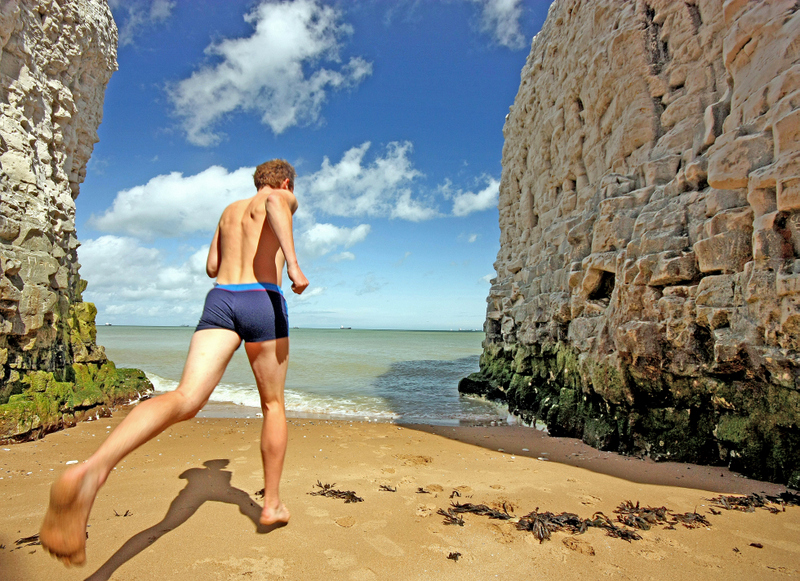 This long sandy bay is backed with white cliffs but at low tide you can scramble round to a secret beach on the right with cave vaults and tunnels carved from the cliffs by smuggler of yore. Alison runs a tea shop from her rose gardens in summer. Between Broadstairs and Margate, at the bottom of Botany Road. 3 mins, 51.3893, 1.4352 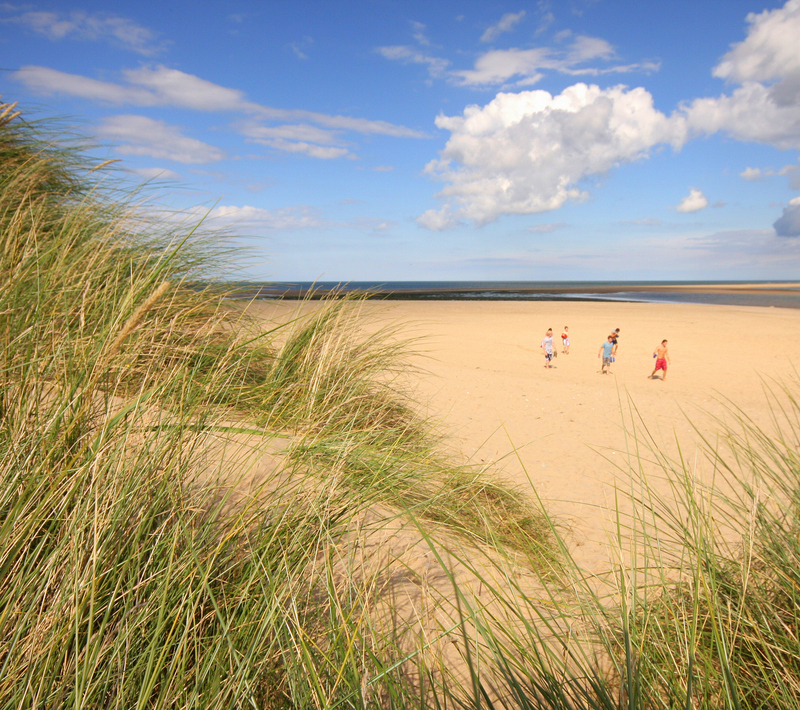 Vast expanse of wild sand and dunes with wood and heath nature reserve. Warm tidal pools at low tide. You will regularly find horses cantering through the waves. It’s a beautiful salty 3 mile walk from nearby Mablethorpe which holds a Bathing Beauties Beach Hut Festival in September. 10 mins, 53.3720, 0.2396 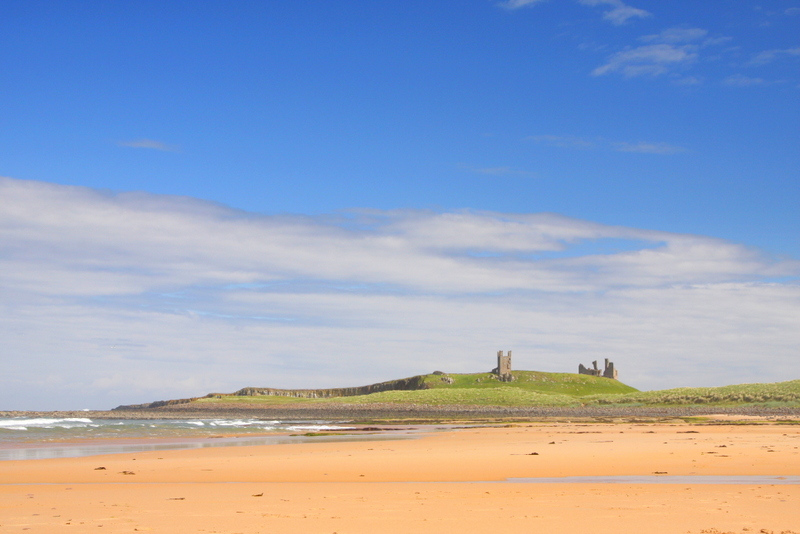 This is probably Northumberland’s most spectacular beach. The fantastic fourteenth-century Dunstanburgh Castle straddles the headland – a squat, impressive hulk with huge gatehouse perched on an outcrop above the beach. A mile on, grass and meadow lead to little Craster harbour, with Robson’s smoked fish (NE66 3TR, 01665 576223) and a Jolly Fisherman’s crab sandwiches (NE66 3TR, 01665 576461). 5 mins, 55.4972, -1.6102 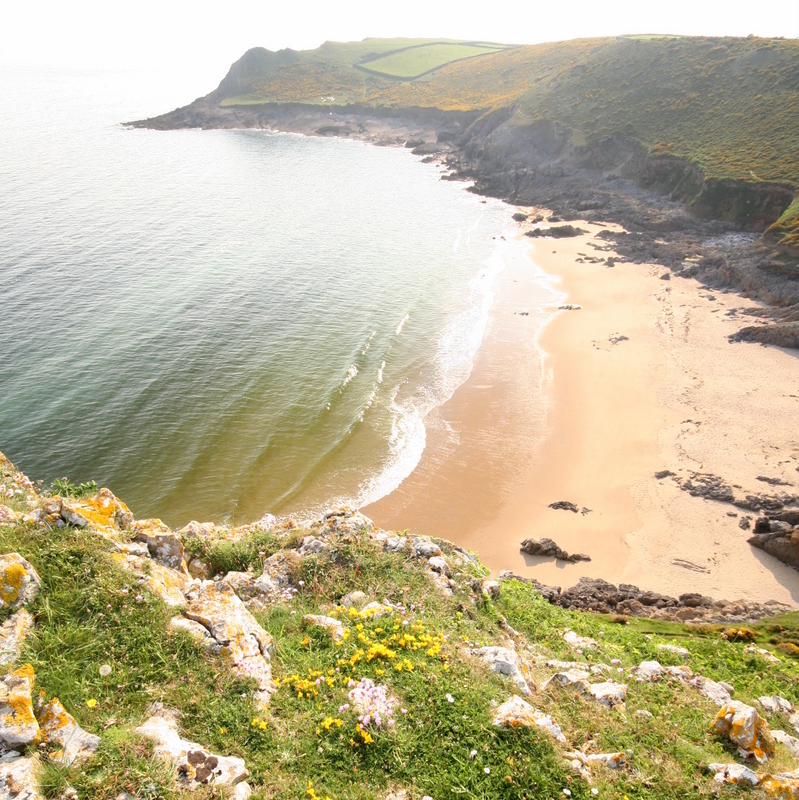 It’s a very pretty valley walk down to this little-known, low tide sandy cove. If you continue on round to the right you will reach Fall Bay with the Giant’s Cave, popular with climbers. Beyond is the dragon-shaped tidal island of Worm’s Head, where Dylan Thomas was once marooned. Pitton, a mile before Rhossili. 10 mins, 51.5604, -4.2823. 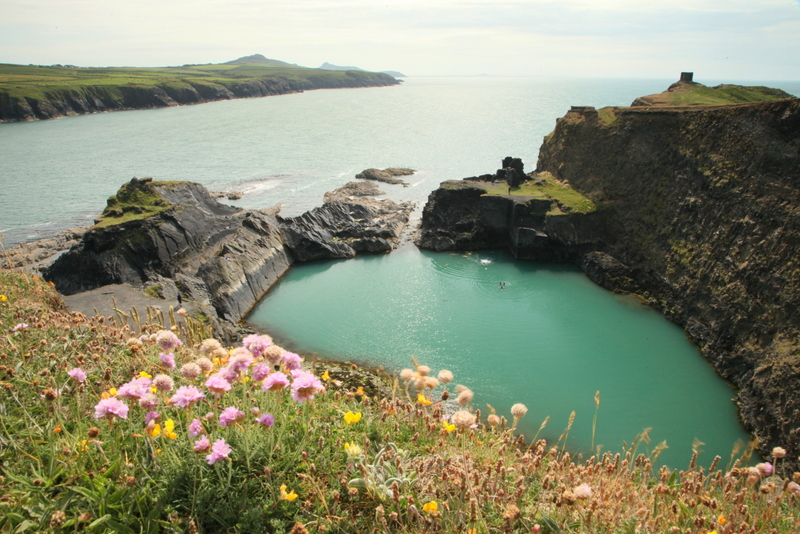 A great sweep of empty sand on the wild and dramatic Pembrokeshire National Park coastline. It’s just 15 minutes from the Blue Lagoon; a turquoise flooded quarry with great jumping and swimming. Continue on up the coast for the old ruins above Porthgain and the quirky Sloop Inn (SA62 5BN, 01348 831449). 51.9435, -5.1992 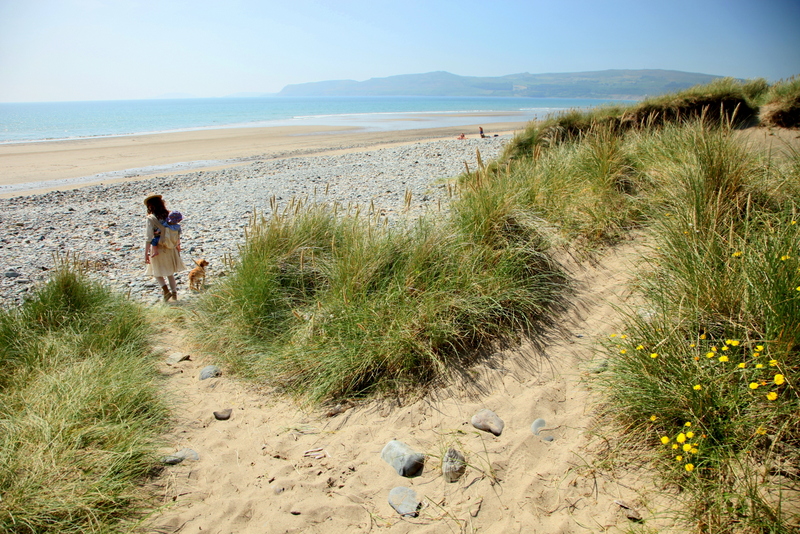 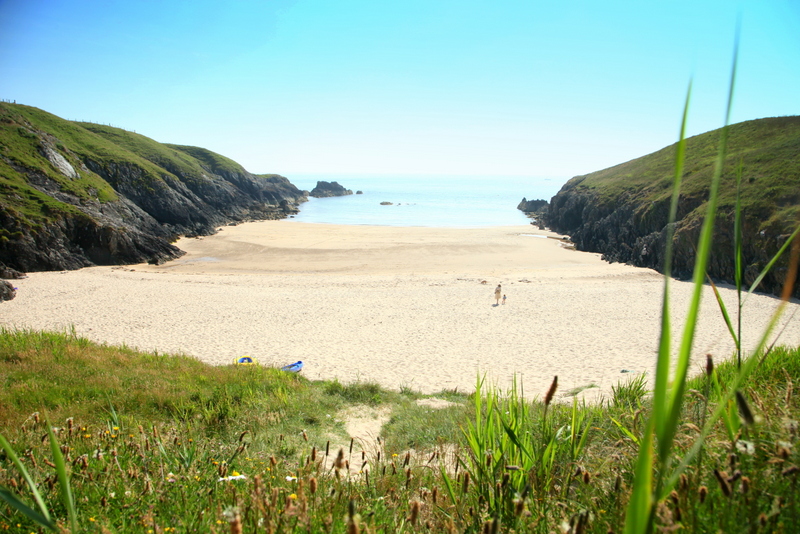 A thick wedge of pure white, west-facing sand occupies a deep cleft in the cliffs. There are flower-filled dunes and a hill fort, perfect for spotting pods of dolphins jumping through the waves at sunset. It’s a bumpy drive down the old farm track but the farmer will let you camp on the rough field adjacent. 2 mins, 52.8516, -4.7217 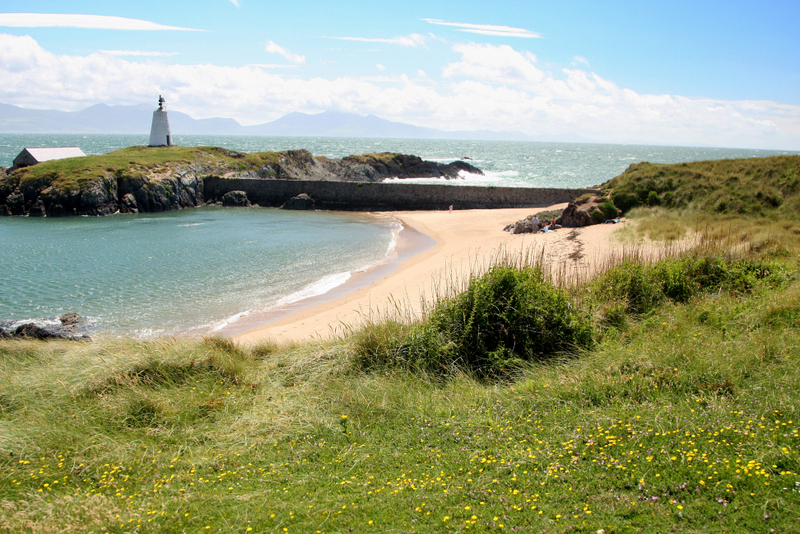 Llanddwyn ‘Island’ is a narrow isthmus studded, the remains of ancient lava flows, with sandy inlets and an old fisherman’s cottages. Set against the vast tracts of sand and forest of Newborough Warren, with its stunning Snowdonia backdrop, this is one of the most beautiful stretches of secret sand in Britain. 30 mins, 53.1382, -4.4096 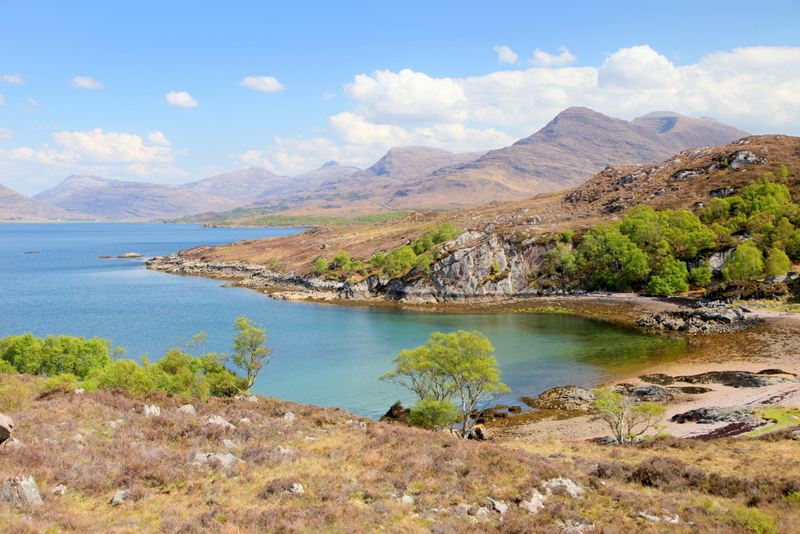 This secluded pebble cove hides on a quiet peninsula on beautiful Loch Torridon. It’s a wonderful wild walk from charming little Shieldag village, through glades and alongside two rocky bays, bright in mid-summer with bell heather. A lovely place to wild camp. 20 mins, 57.5362, -5.6457 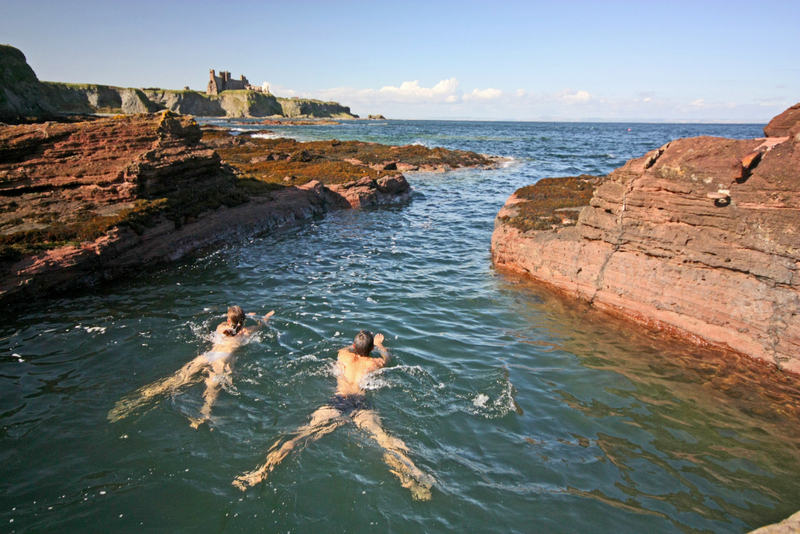 This beach sits beneath the magical ruins of cliff top Tantallon castle, one of the best cliff castles in Britain, and dating from the fourteenth century. The wooded beach also overlooks the guano capped island of Bass Rock, sticking up like an iced cup cake from the sea. To the left of the beach is a tiny harbour inlet with jumps and swimming. 5 mins, 56.0535, -2.6326 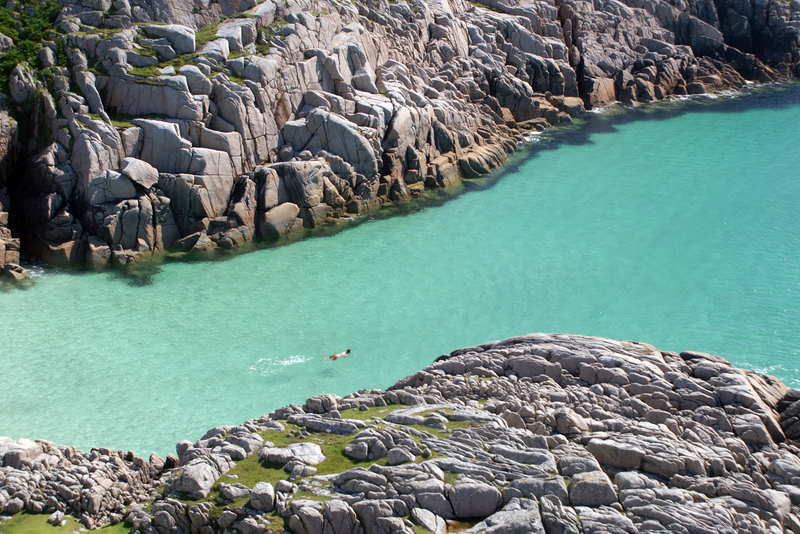 Grassy meadows lead down from a basic campsite to a white beach and sunset views over the islands of Iona. The adventurous can walk 3 miles down to Tràigh Gheal through ruined village of Tìr Fhearagain. These are some of the purest sands in Britain, and the water shines turquoise. At low tide you can walk across to Robert Louise Stevenson’s ‘Treasure Island’. 3 mins, 56.3085, -6.3672 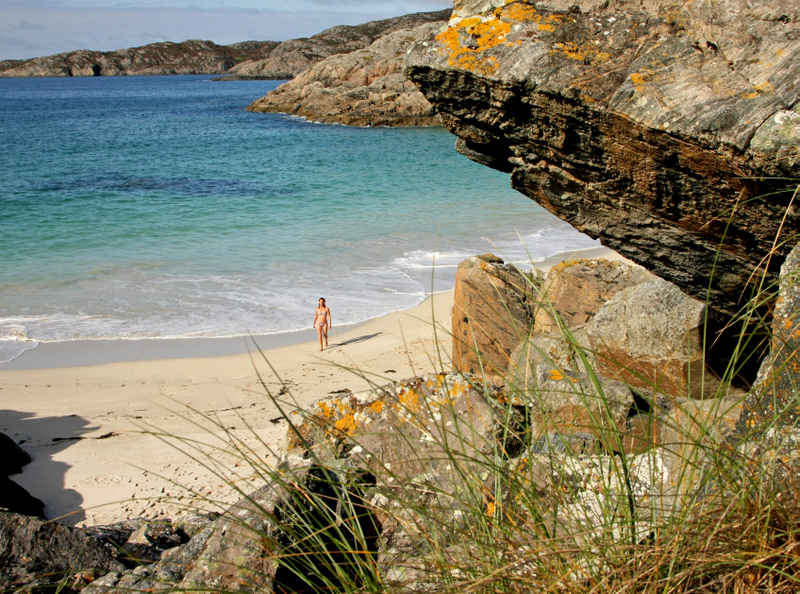 The famed mountains of Stach Pollaidh and Suilven rear up behind this perfect white sand beach. Achmelvich literally means ‘meadow and dunes’. From here you can also walk on to the hidden bay of Port Alltan na Bradhan, a deep, sand-lined natural harbour, with very sheltered swimming and a ruined mill. 10 mins, 58.1727, -5.3043 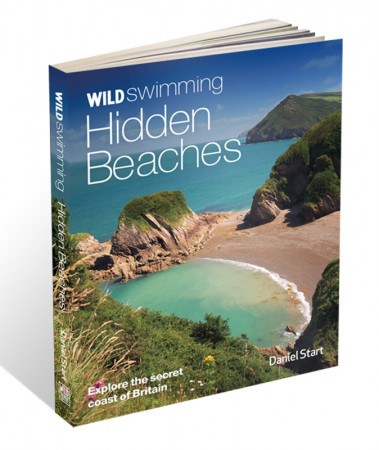