Lola Culsán and John Weller spent a year campervanning, walking, swimming and exploring Spain’s secret coast to bring you their new guide book Hidden Beaches Spain. These are a few of their all time favourite for those who love coastal walking. You can also read about their favourites for coastal wild swimming here.  They are also the authors of Wild Swimming Spain. 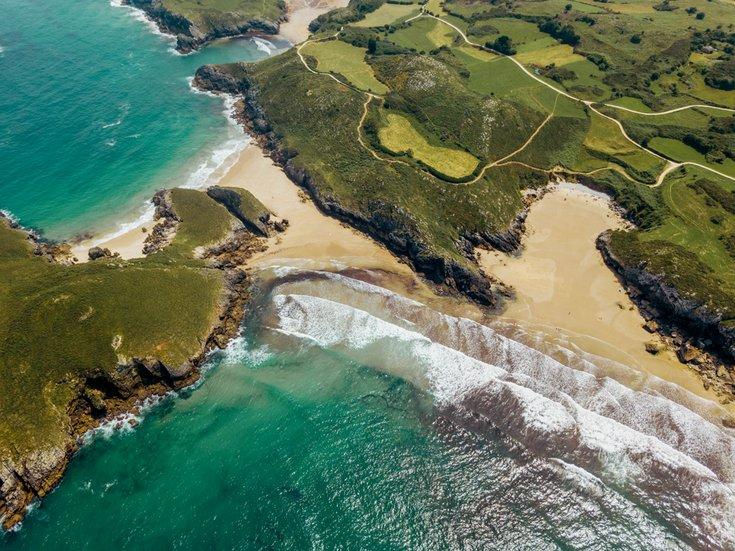 Leafy, green hillsides surround pristine yellow-sand beaches and cliffs on northern Spain’s Costa Verde. To reach PLAYA EL PORTILLU from the amusingly named town of Poó, we follow the coastal path west, past waving purple heather and yellow gorse. After a couple of kilometres, a vast golden beach opens up below us, a tide mark illustrating that in a few hours the beach will shrink to the size of a Spanish tablecloth. Children play in warm rock pools at low tide which also reveals a paradisiacal double-sided beach to the east and a huge rocky islet and a secluded cove to the west. Check tide times so you don’t get cut off. 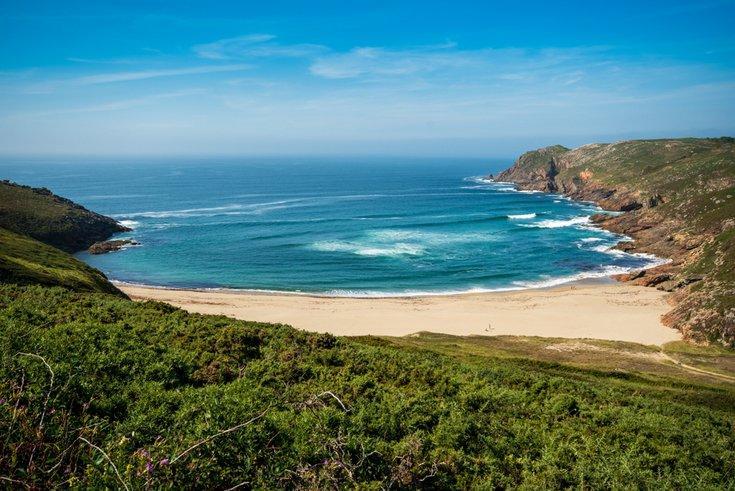 On the Coast of Death, rugged hills give way to fields, vineyards and orchards, wide sandy bays and secluded, pocket-sized coves. PRAIA ARNELA is a wild and lonely beach where impressive waves roll repetitiously to the shore; riptides are clearly visible and there is a boiling whirlpool at the centre of the bay. Take great care if you’re brave enough to swim or surf. Set in unbridled countryside with bucolic villages and fields of maize. Enjoy wonderful cliff-top walks to escape civilization and marvel at the power of the Atlantic. Cabo de Fisterra, once considered the end of the earth, is a good hike westwards along the coast. 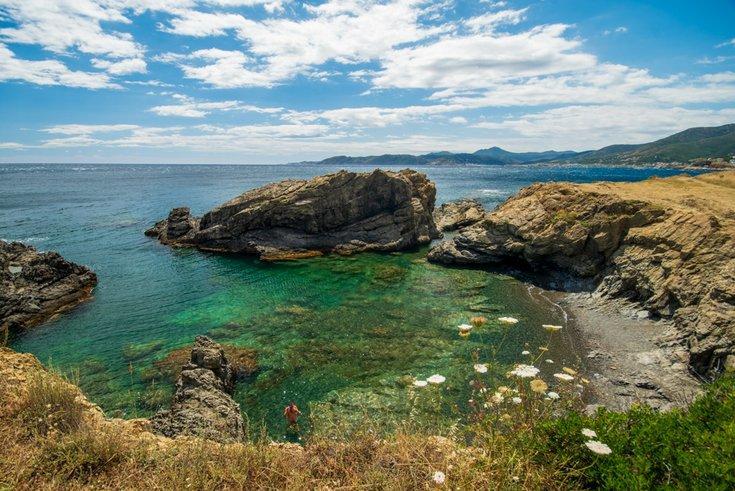 Our Rugged Coast adventure starts a short hop from the French border. The Costa Brava extends down to the province of Barcelona and takes in wide sandy bays and tiny coves nestling between jagged cliffs adorned with pines and wild flowers. Wild and wonderful coves adorn the Punta del Cap Ras, a protected peninsula covered with marram grass, wild carrot and golden thistle. CALA BRAMANT is the most spectacular: a sheltered circular cove reached after a short, steep descent. Perfect for swimming and snorkelling. Follow the Camí de Ronda hiking trail northwards towards France along a series of ancient coastal footpaths.

Costa Barcelona boasts a temperate climate and fertile land where olives, vines, oranges and almonds grow in abundance. Tourists from all over Europe are drawn to her long, sandy beaches and sparkling waters. South of Sitges, we stroll through shaded woods of pine, oak and mastic bushes, then are forced to crawl through a tunnel beneath the railway line to reach PLATJA DE L’HOME MORT & PLATJA DE ROSÉS. We’re rewarded with two gorgeous sandy beaches within the protected Costes de Garraf. Clothes are discretionary on both beaches. A rainbow flag flutters proudly in the next cove – Playa del Muerto – and a sign proclaims it the first gay nudist beach in the world. 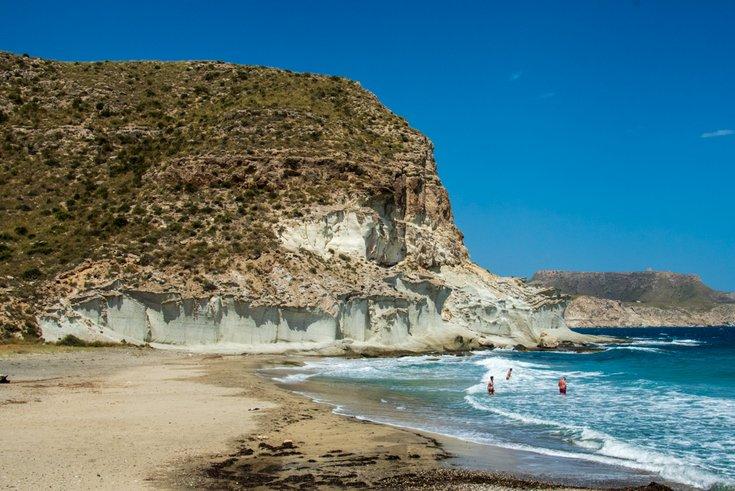 All along Almería’s wild coastline lie countless hidden beaches and sandy coves, their natural beauty preserved by remote locations and the protected status of the Parque Natural Cabo de Gata-Níjar. CALA DE ENMEDIO is a remarkable sandy beach between two headlands that, after years of erosion, resemble large rolling waves. A flat, white shelf on the right of the cove provides welcome afternoon shade and the backdrop of green hillsides completes an idyllic picture. Such breathtaking scenery isn’t easily won, so be prepared for a long walk along narrow paths. An early start is recommended. Bring supplies and lots of water. 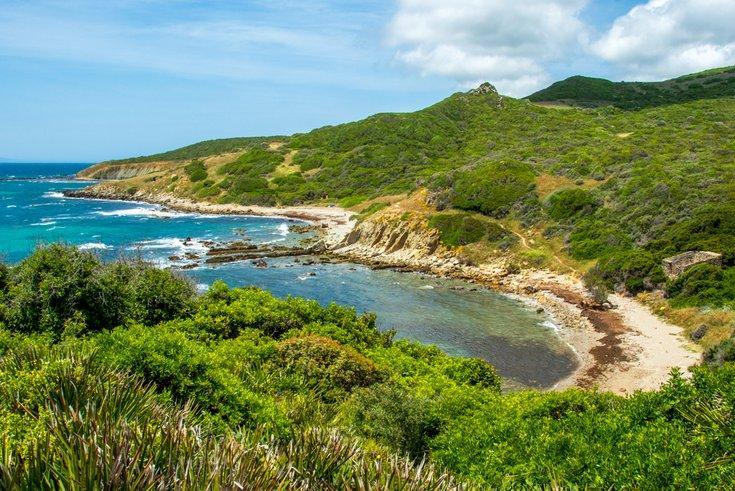 The Coast of Light’s shoreline is fringed by pine forests and wildflowers. Warm autumn winds conjure waves and surf for that fabulous feeling of flying. Sherry (Jerez), for which this region is famous, can have the same effect. Sixteenth-century coastal watchtowers still appear to be guarding the Strait against Berber pirates. On our quest to find PLAYA DE ARENILLAS, a bullet-riddled sign warns us we’re in a military zone. ‘Ignore the signs, the place is abandoned,’ a local assures us. We park and stride along the coast of the Parque Natural del Estrecho, at the southern tip of Spain where Africa is so close we feel we can almost reach out and touch it. Yellow gorse mingles with wild dwarf palm, holm oak and wild olive trees and gives way to scrubland. Inland lie dense cork forests. After a long hike the swim at LITTLE SANDS BEACH is satisfying. 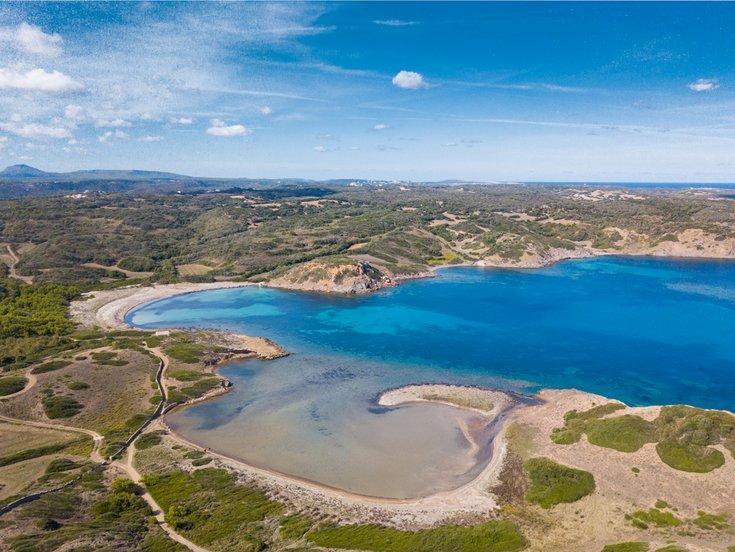 Menorca’s beaches are impressive. In the south, you’ll find exquisite Caribbean-style white sand coves and dazzling turquoise water. In the north, the coast is wilder, with idyllic coves sheltered by rocky headlands and forested hillsides. The pristine beaches of the S’ALBUFERA DES GRAU nature reserve are well worth the hike. For intrepid kayakers, a paddling time of 20 minutes from the pretty fishing village of Es Grau will take you to ISLA COLOM, an uninhabited island where you can relax among wild thyme and tamarind bushes or gaze at fish beneath the waves.

About the authors / book

Lola Culsán And John Weller are the authors of Hidden Beaches Spain and Wild Swimming Spain (Wild Things Publishing, £18.99 & £15.99 – also available as an ebook and app for Android and iOS / Apple iPhone). 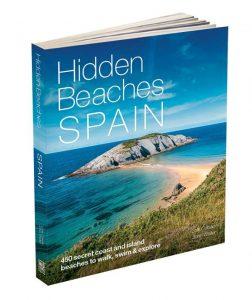 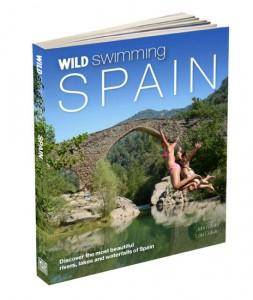