Skip to content
View cart “Only Planet – a flight free adventure – Ed Gillespie” has been added to your cart.

EU customers may find it easier to buy on Amazon or Book Depository (free international shipping).

The best-selling Wild Swimming series travels to Croatia and Slovenia. Discover more than 120 of the most beautiful places to swim, from the Mediterranean coastline of Croatia to the mesmerising waterfalls and mountain rivers of Slovenia.

The perfect guide for families on holidays or explorers looking for their next adventure. This dazzling new travel guide combines engaging travel writing with spectacular photography to lure you off the beaten track to magical swimming locations, from classic destinations to local secrets you won’t find listed elsewhere.

Wild Swimming Croatia and Slovenia takes you on an aquatic voyage through two of Europe’s most diverse and beautiful countries. 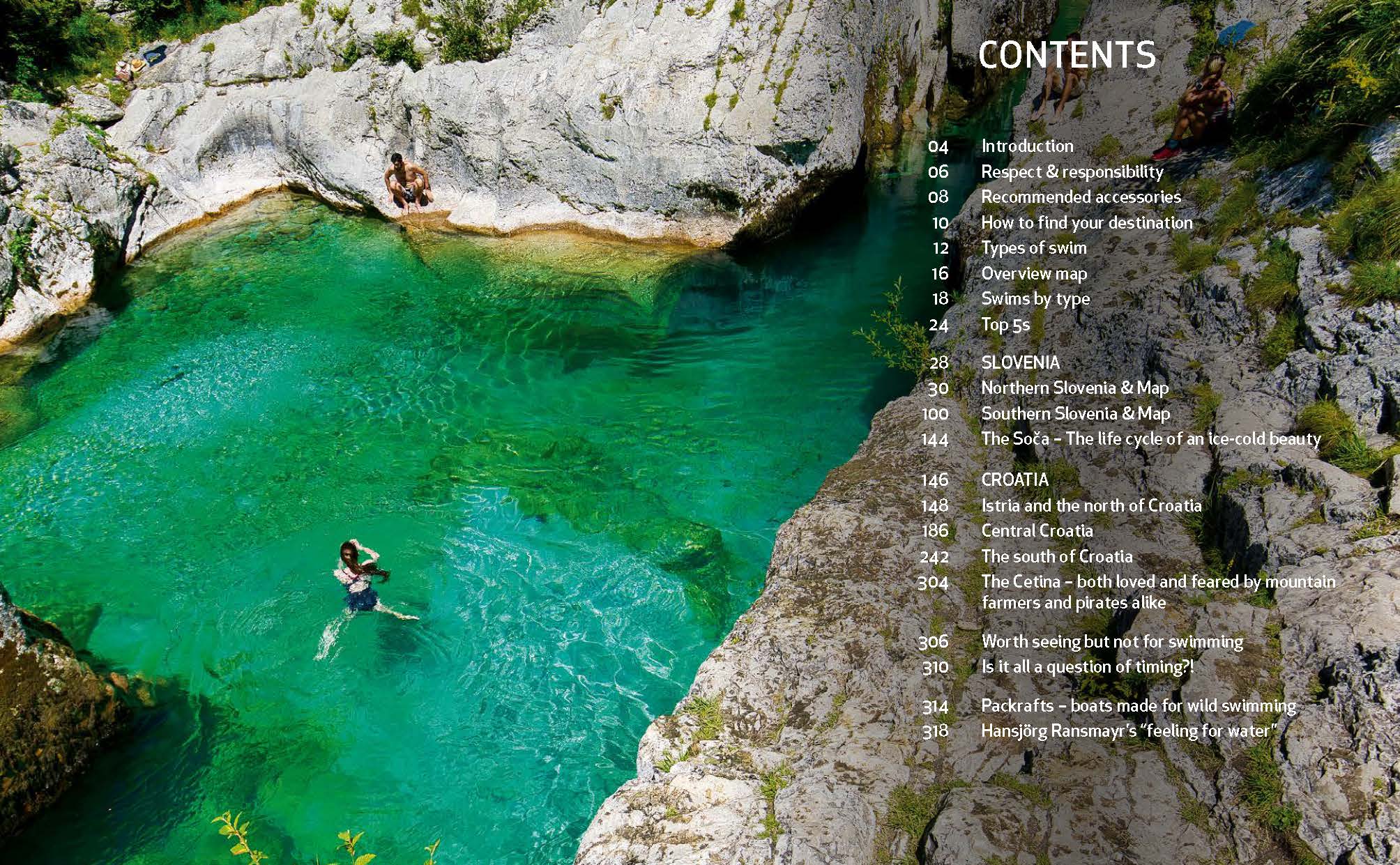 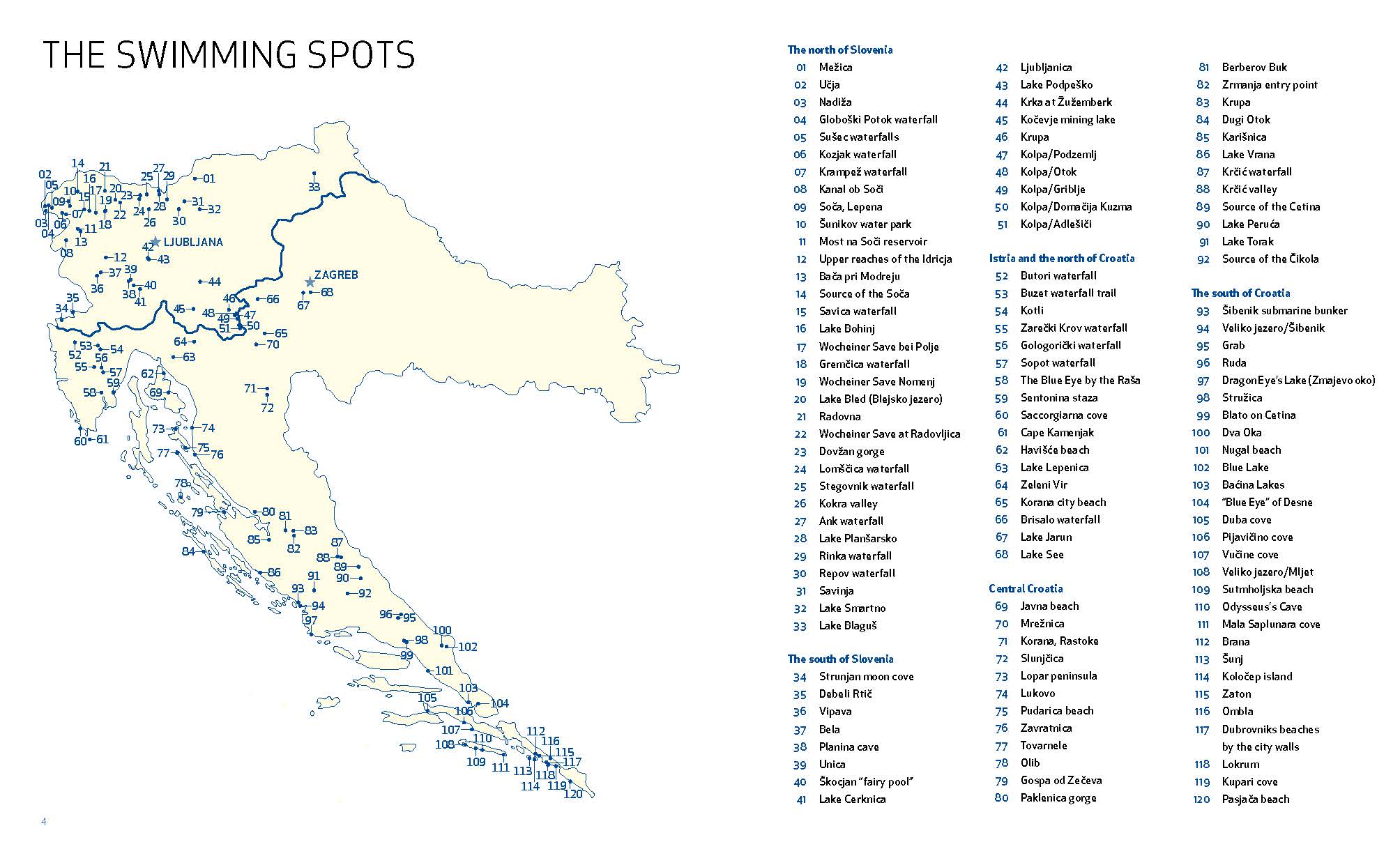 “I FEEL SLOVENIA” is the fitting slogan used by the Slovenian Tourist Board. It is a statement that everyone would likely agree with, including ambitious outdoor swimmers. The huge variety of landscapes, sceneries and bodies of water, as well as the low population density and large extended forests, are big attractions for nature lovers. Slovenia is very conscious of the natural gems that the country has to offer, and it is keen to preserve them as best it can. This is demonstrated by the fact that this country, which is the wealthiest among the countries of the former multi-ethnic state of Yugoslavia, has declared 36 per cent of its geographical area as “Natura 2000 Area” – that is, land worthy of protection. In contrast, only 15 per cent of Germany’s and Austria’s land surface have the same protection.
20,000km2 of land surface may not sound much for a holiday destination, but it is precisely this size and the resulting small distances between the individual spots that make Slovenia a great experience, and not just for wild swimmers. 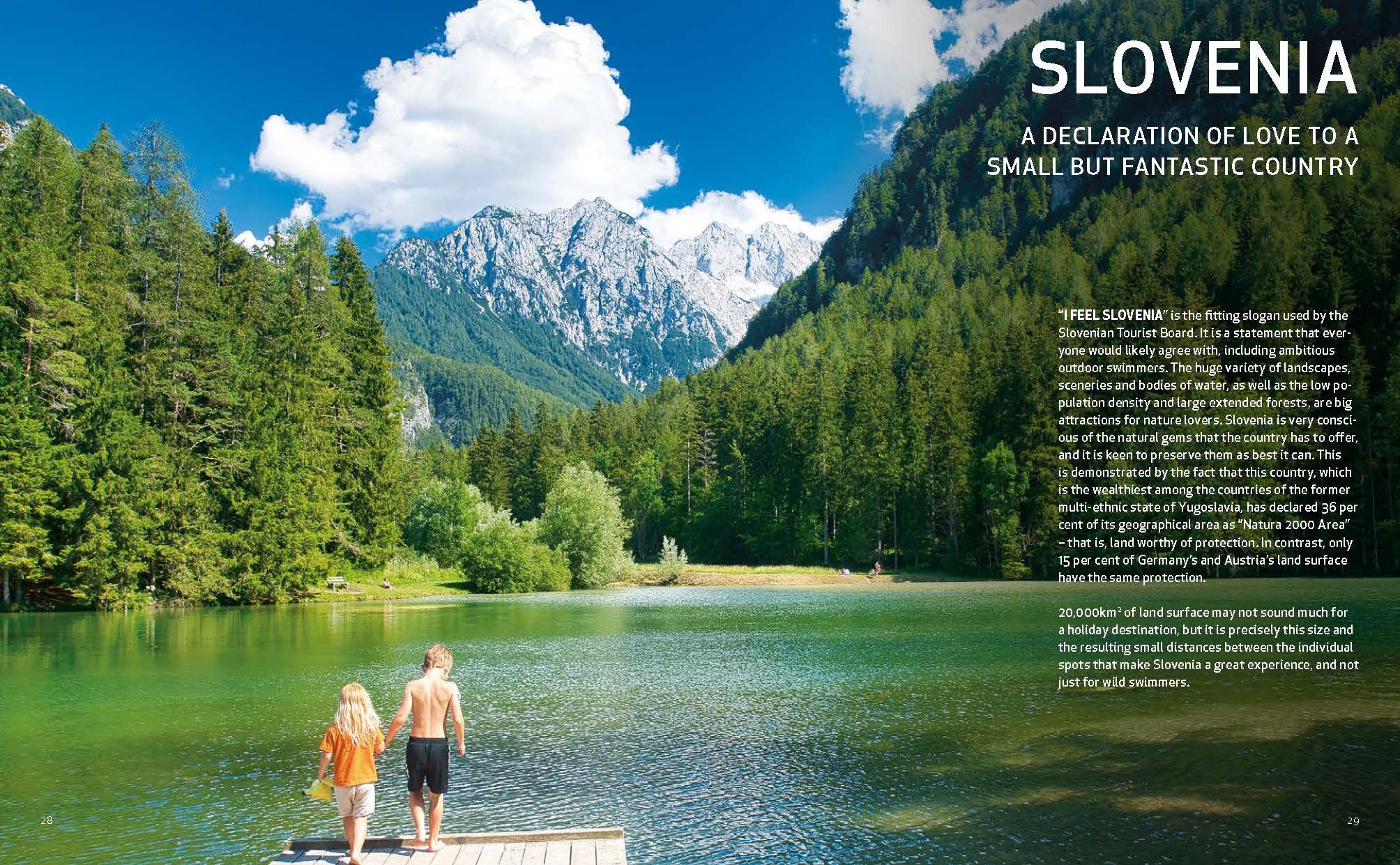 NORTHERN SLOVENIA This chapter comprises all of the spots to the north of the capital Ljubljana, described in order from west to east and from north to south.
While the north-west of the country features the high mountain ranges of the Julian Alps, Karawanks and Kamnik Alps, the north-east is characterised by undulating uplands that eventually become the Pannonian Plain. Naturally, the different types of landscape are crossed by a variety of waterbodies. In the north-west, we find many waterfalls, mountain streams and tarns, whereas the north-east is dominated by wider rivers as well as steppe and forest lakes. The karst rock in the centre of the country produces its very own phenomena. So much can be said already; all of them have their own unique charm! 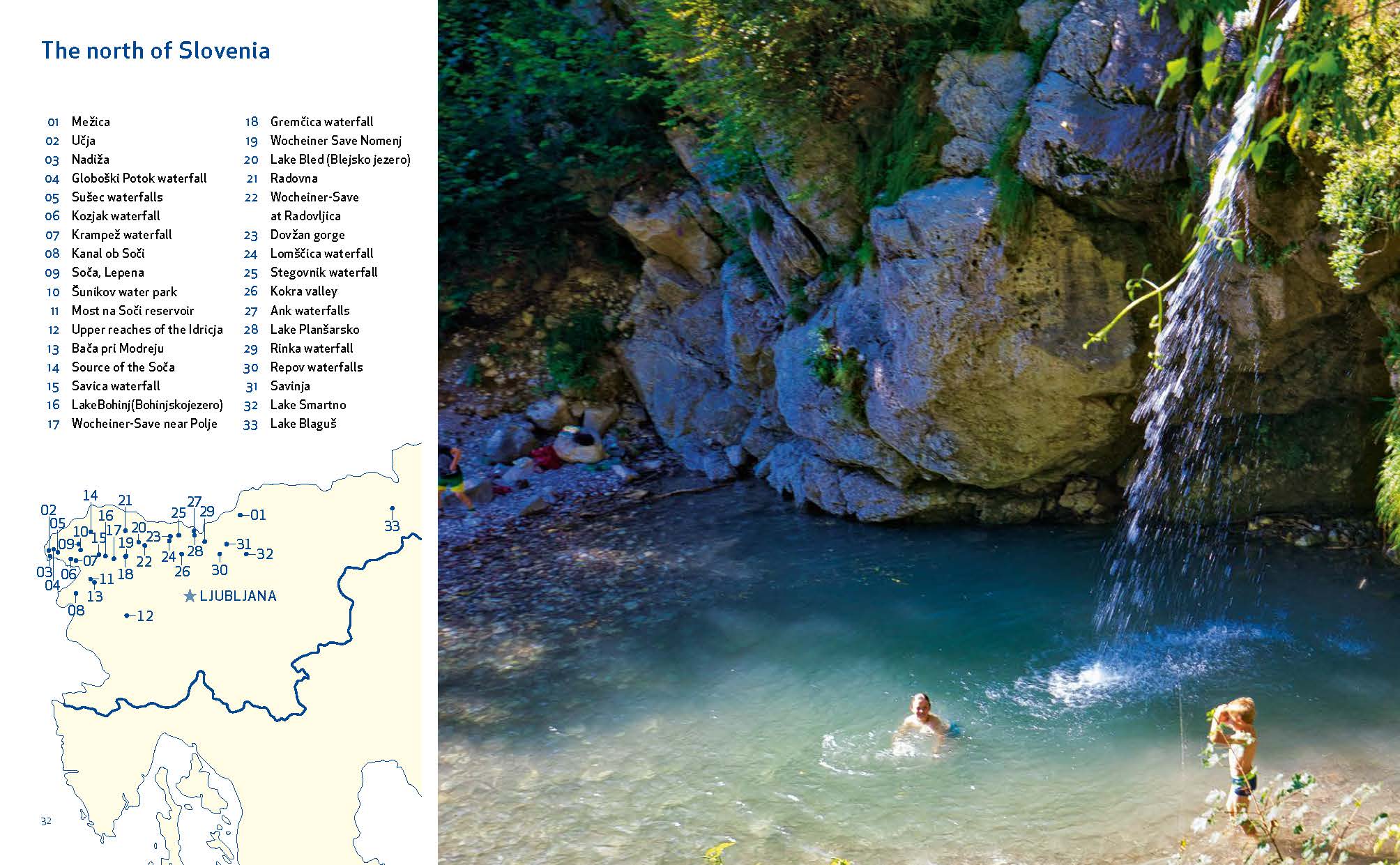 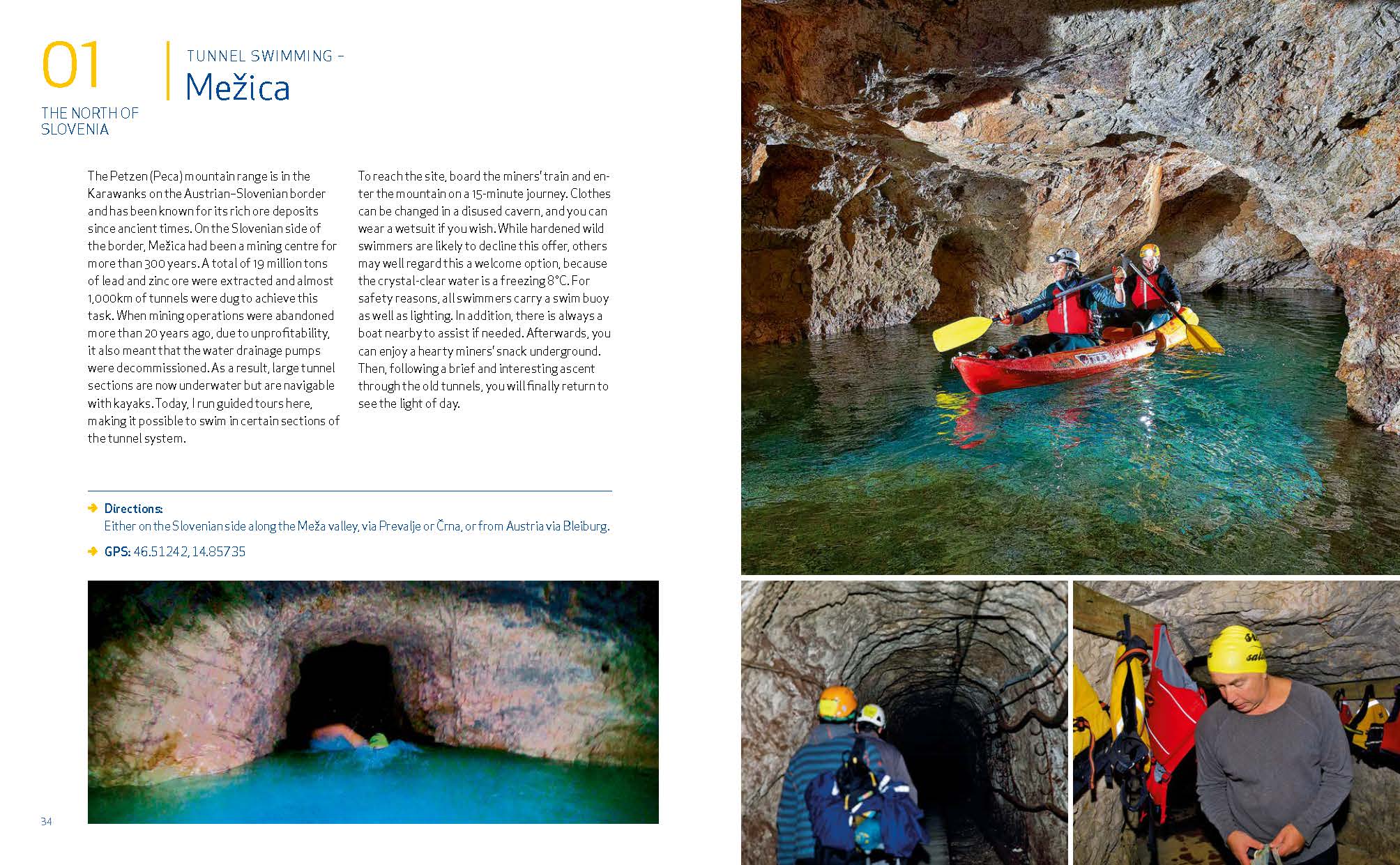 SOUTHERN SLOVENIA – In this book, “The South of Slovenia” includes all spots to the south of the capital Ljubljana, described from west to east and from north to south.
Roughly in the centre of Slovenia, you find karst phenomena that are typical for the country. The karst rocks harbour mighty karst springs as well as extended cave systems and “disappearing” rivers – streams and rivers that run on the surface for a certain distance but then disappear below ground. There are also what one would call “periodic” lakes. The best-known periodic lake, which is also the biggest in Europe, is Lake Cerknica, with its unique hydrology, fauna and flora.
In summer, the flatter south-east of the country is dominated by the Kolpa, which has pleasant stream-like temperatures and marks the boundary to Croatia over a distance of more than 100km. The Slovenian Riviera is in the south-west of the country. Despite Slovenia’s Mediterranean coastline measuring a mere 47km, it features some particularly beautiful beaches, an impressive reminder of the variety that this small but wonderful country has to offer to people who love swimming. 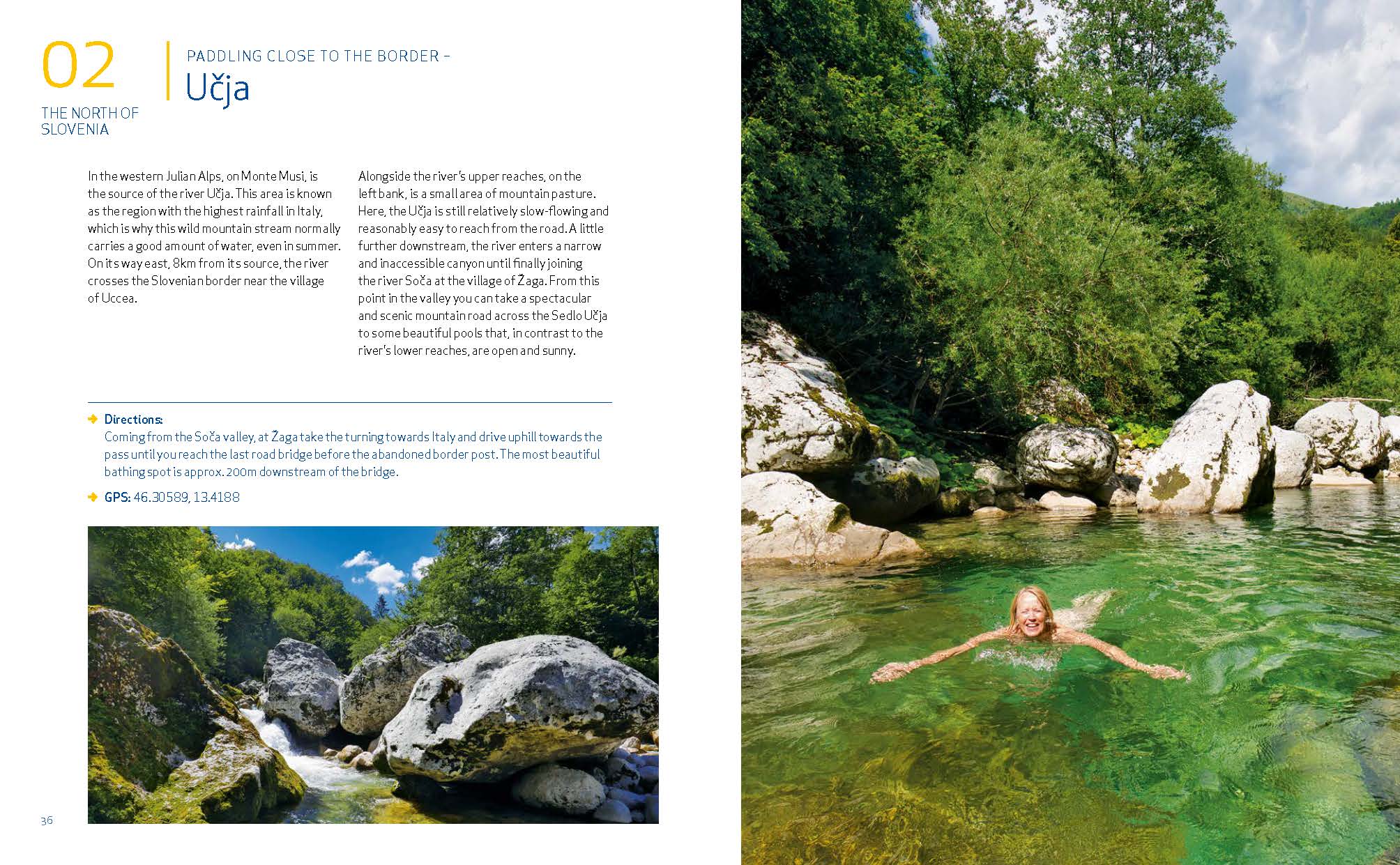 CROATIA – The Republic of Croatia emerged from the multi-ethnic state of Yugoslavia by declaring its independence in 1991. It was able to defend this newly founded independence during the Croatian War, which lasted until 1995. The country, which is called “Hrvatska” in Croatian (abbreviated to HR), borders Slovenia in the north-west, Hungary in the north, Serbia in the north-east, Bosnia and Herzegovina in the east and Montenegro in the south-east. As an exclave, the most southerly part of the country, the former Republic of Ragusa around the major city of Dubrovnik, doesn’t have a direct land connection to the rest of Croatia’s territory. The two territories are divided by Bosnia and Herzegovina’s access to the Adriatic Sea. This is a strip of land only a few kilometres wide, soon to be “bridged” by a monumental construction project.
In many ways, Croatia is deemed to be a country in transition. It is quite telling in respect of both the geographical and the socio-demographic development of Croatia that the country has provided the locations for German-produced Westerns as well as several episodes of the fantasy series Game of Thrones. The former were made in “Red Indian Territory” (that is, in the remote karst regions of continental Croatia), whereas the latter were filmed on the characteristic beaches (and in the picturesque towns) of South Dalmatia. Descriptions of Croatia’s beaches, coastlines and islands alone would fill many volumes, and there is ample literature available on that subject matter already. Therefore, while this book does feature those sites, it predominantly focuses on providing information about the lesser-known and rarely mentioned wild-dipping and wild-swimming spots in the country’s hinterland. 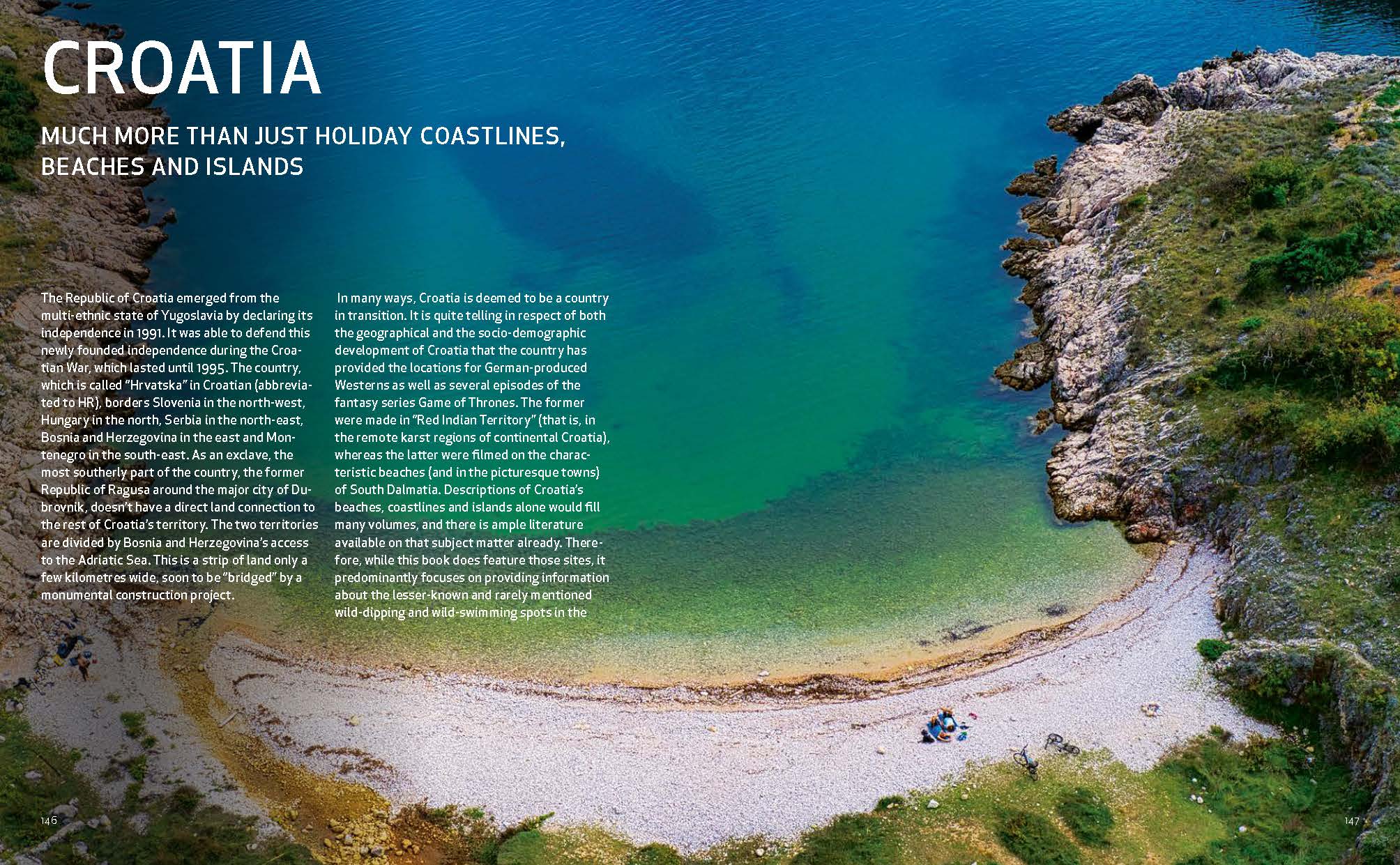 NORTHERN CROATIA – This section of the book includes all spots on the Istria peninsula, continental northern Croatia and the northern Adriatic Sea down to Crikvenica. The spots are described from west to east and from north to south.
The coastline of the western Croatian region of Istria is approx. 540km long. Parts of this coast are divided by fjord-like inlets, such as the Limski Channel with its well-known mussel beds. The majority of the beaches are either rocky or gravel beaches, so that sandy beaches are more of an exception. The inner part of Istria is sparsely populated, and many villages are situated in picturesque locations on hilltops, from where there are wonderful views right up to the coast. Since the peninsula is mostly made up of limestone rock and the cooler seasons can bring great amounts of rainfall, the conditions are ideal for spectacular waterfalls. The southernmost tip of Istria has been turned into the extensive nature reserve and wild swimming paradise of Cape Kamenjak.
Continental northern Croatia comprises the lowlands alongside the rivers Save and Kupa, the mountainous region of Zagore north of Zagreb, the Medimurje between the rivers Drau and Mur, the mountains of Gorski Kotar between Rijeka and Karlovac, and coastal sections of the northern Adriatic Sea. These regions offer incredible opportunities for swimmers: from cave, spring, river and coastal swimming to urban swimming. 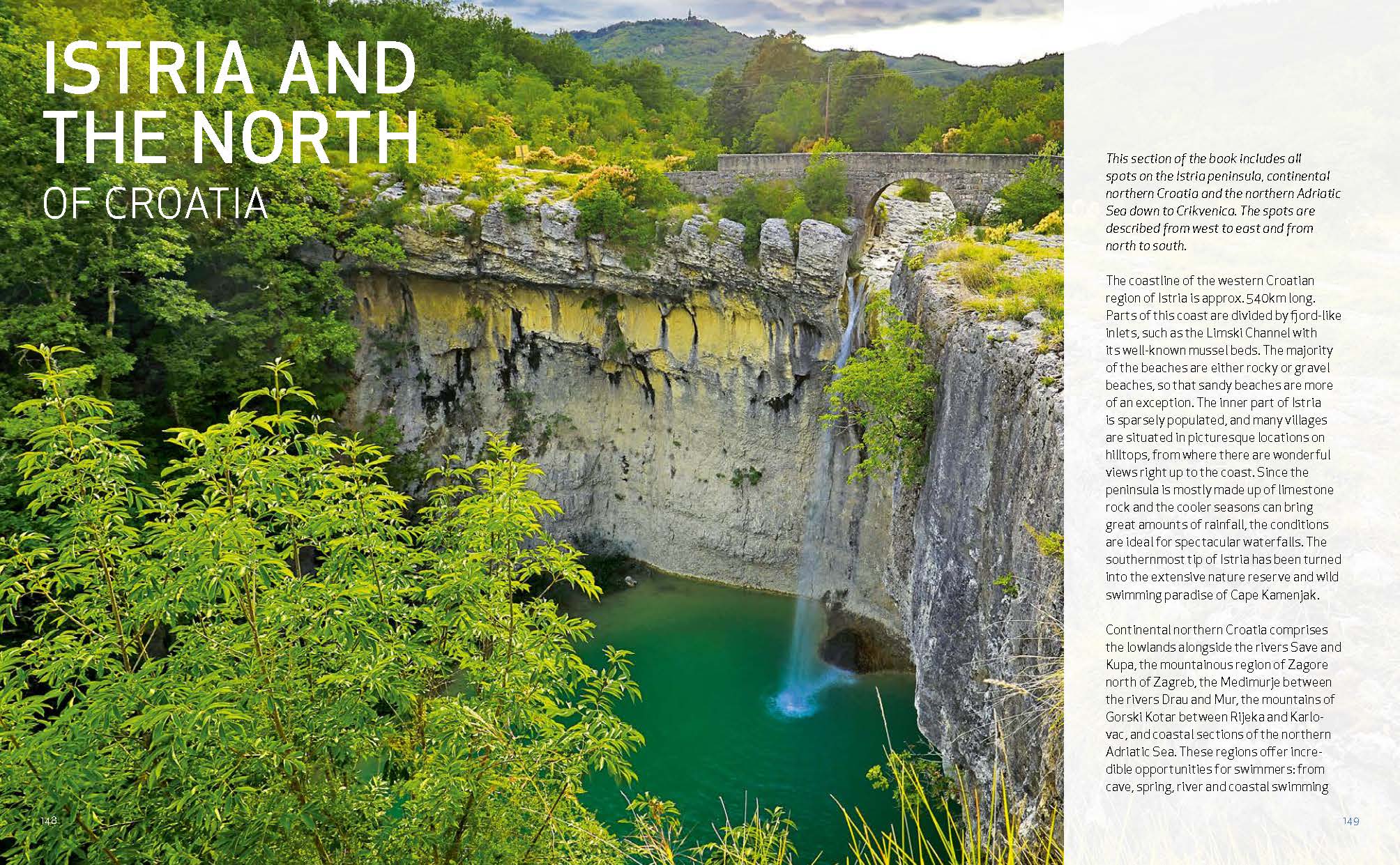 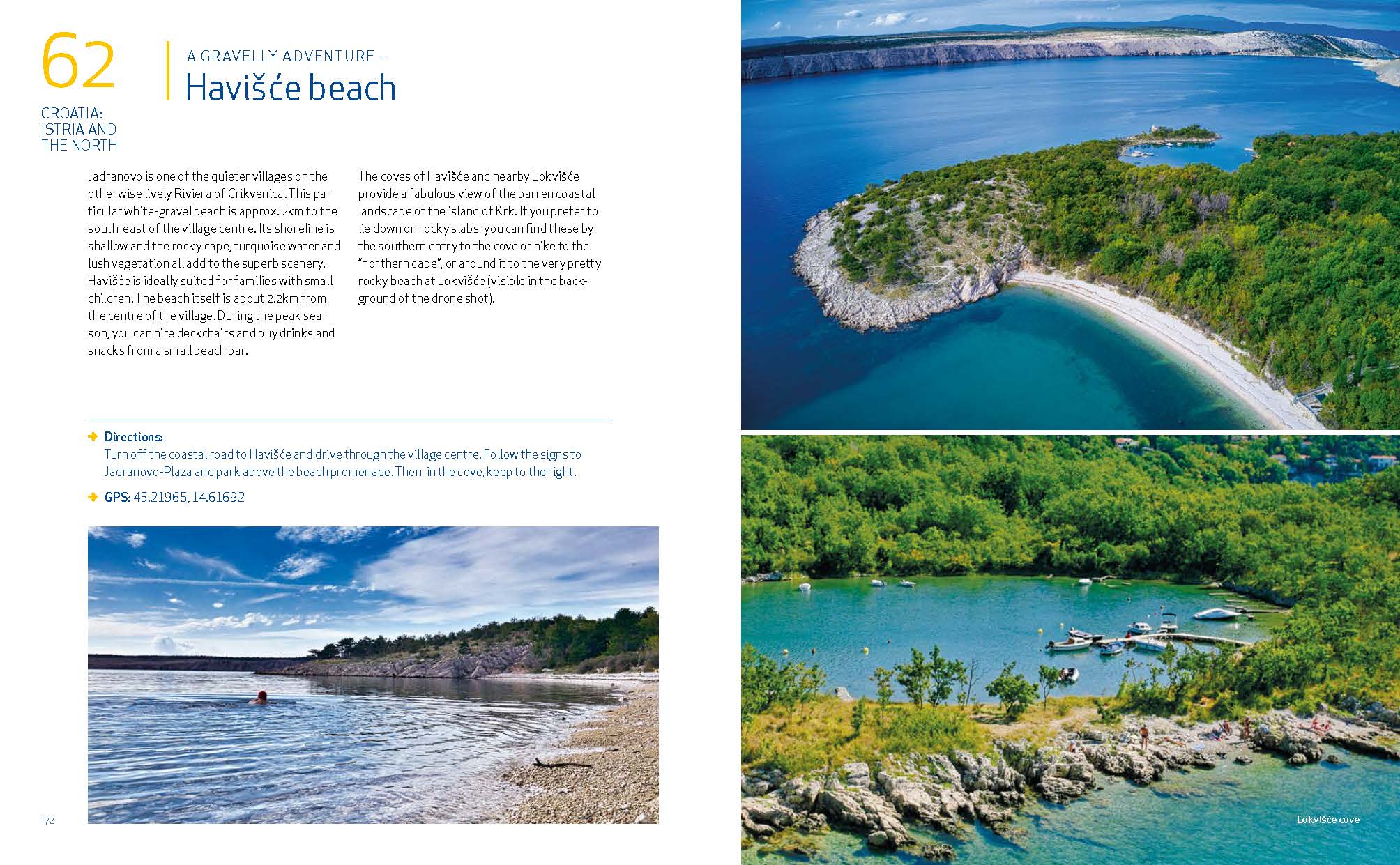 CENTRAL CROATIA – This section includes all spots between Crikvenica and Šibenik. The spots are described from west to east and from north to south..
Up to Zadar, the almost 150km-long Velebit mountain range dominates this region. The “big thing” (the literal translation) is between 10 and 30km wide and densely wooded on its landward side, whereas the vegetation is sparse on the seaward side. Cave explorers and climbers love this coastal mountain range because of its geology. Sailors, on the other hand, have cursed it at times since it is here that the feared katabatic Bora winds originate. The coastal road winds itself between the steep mountainsides on the one side and the craggy cliffs, which drop down to the sea, on the other. This road offers marvellous views of the offshore islands and there are countless minor roads and untarmacked tracks leading downhill towards idyllic coves.
Despite somewhat disputed definitions, it is generally accepted that the historical and geographic region of Dalmatia begins roughly at Zadar. The Dalmatian landscape is predominantly a rugged karst region that includes the offshore islands as well as the mountainous hinterland. The coastal region from Zadar to Šibenik is particularly fertile.
From a swimmers perspective, the islands and coastline of the region, as well as the karst rivers of the Dinaric mountain range and Dalmatian Zagora, and also the gigantic Lake Vrana, have a lot to offer. 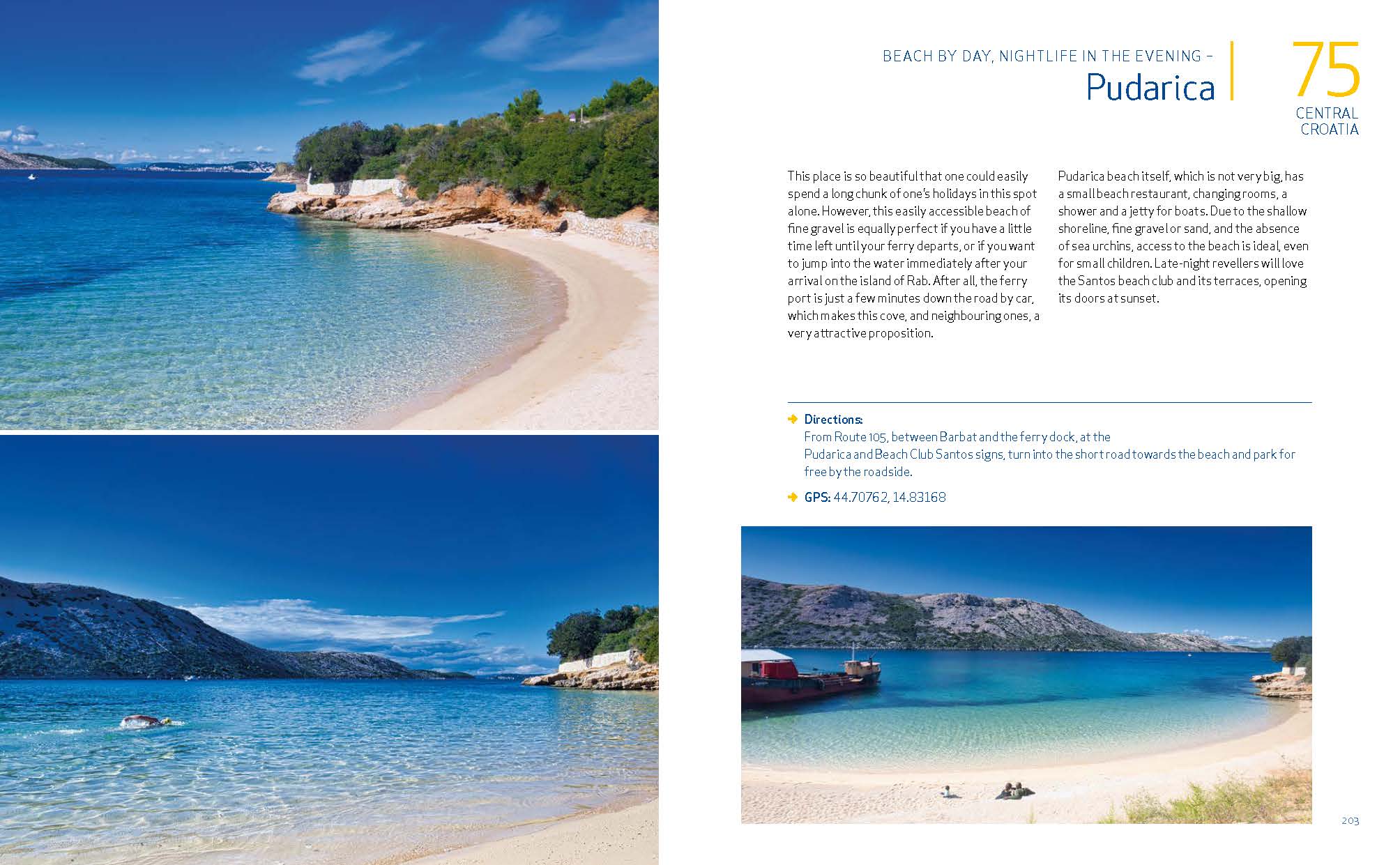 SOUTHERN CROATIA – This section includes all spots south of Šibenik. The spots are described from west to east and from north to south.
The area around Šibenik has gained a worldwide reputation due to the Krka National Park with its spectacular waterfalls. Sadly, swimming in this wonderful river, which flows into the Adriatic Sea at Šibenik, has recently become prohibited. Nevertheless, its extensive catchment area in the Dalmatian Zagora, with its unique karst phenomena, is a paradise for wild swimmers. The Dalmatian hinterland includes the region around the towns of Kaštela, Trogir and Šibenik, as well as, in a broader sense, the area of Drniš, Knin, Sinj and Imotski. The Zagora is separated from the sea by the Mosor and Biokovo mountain ranges. The former stretches over a length of 25km between Split and the mouth of the Cetina at Omiš. The Biokovo mountains to the south tower above the Makarska Riviera, an area highly developed by the tourism industry, and extends to the fertile delta of the river Neretva at Ploče.
Dalmatia’s most southerly islands of Mljet, the Elaphiti islands, and Lokrum, as well as the Pelješac peninsula, offer adventurous swimmers unique options, such as the beaches by the city walls of Dubrovnik and the coves just before the border to Montenegro.