Skip to content
View cart “Wild Guide French Alps book” has been added to your cart.

EU customers may find it easier to buy on Amazon.es or Amazon.co.uk or Book Depository (free international shipping).

New from the best-selling Wild Guides, discover discover 700 hidden adventures from this popular tourist region, from remote coves and wild mountains to desert landscapes and green meadows rich with wildflowers. Experience the best of Andalucia’s rural food culture and accommodation. 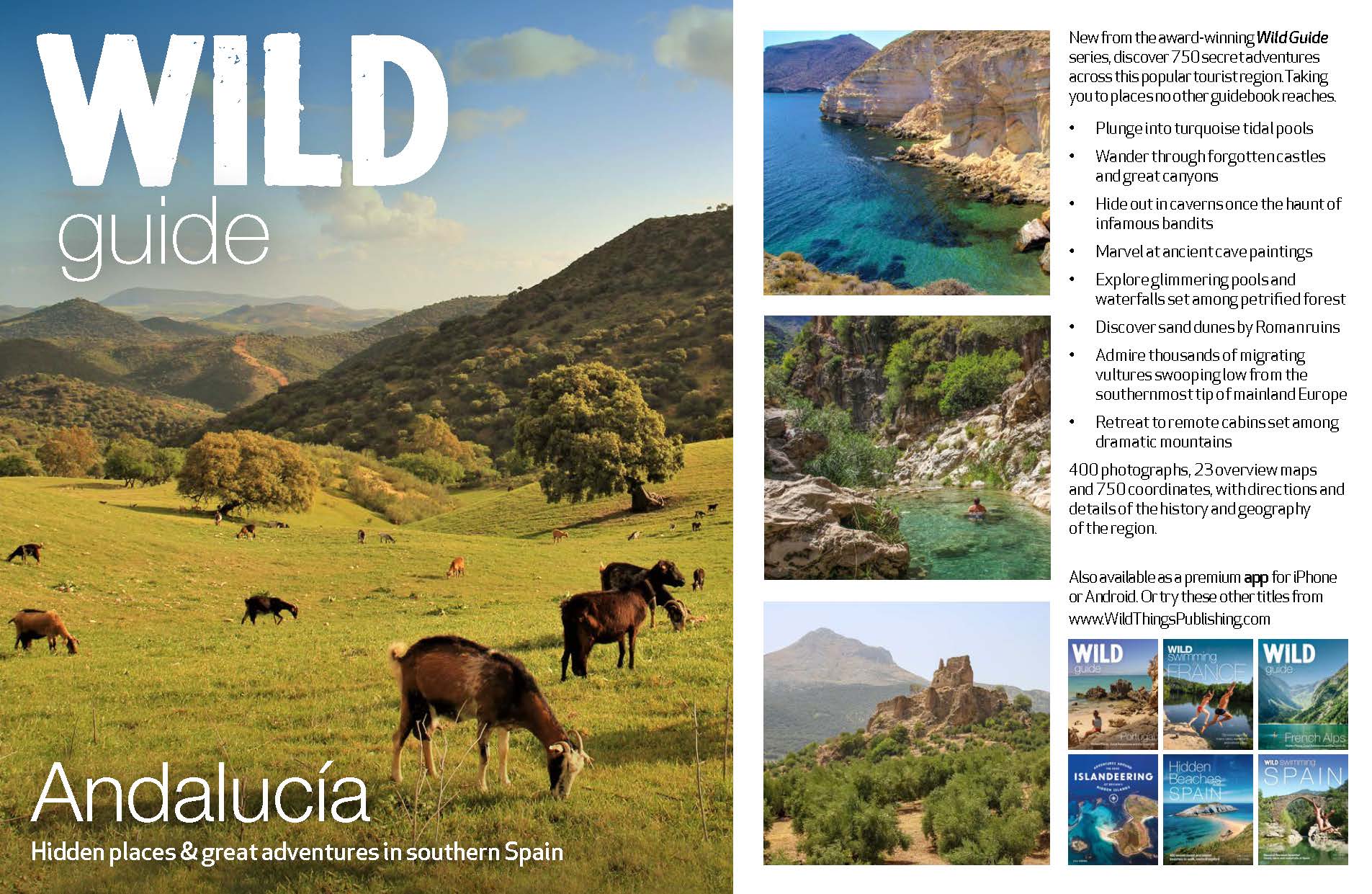 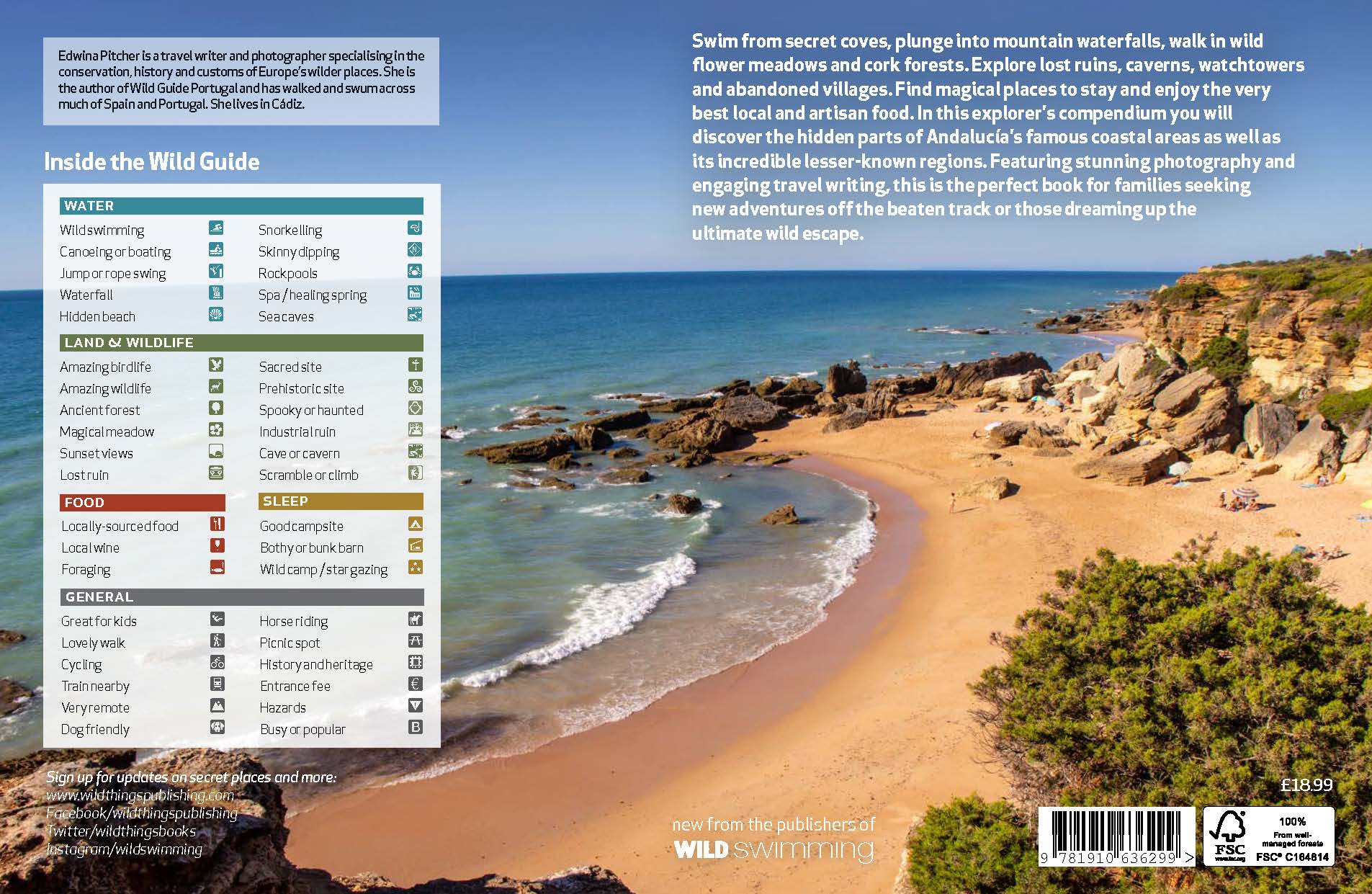 Edwina Pitcher is a travel writer and photographer specialising in the conservation, history and customs of Europe’s wilder places. She is the author of Wild Guide Portugal and has walked and swum across much of Spain and Portugal. She lives in Cádiz. 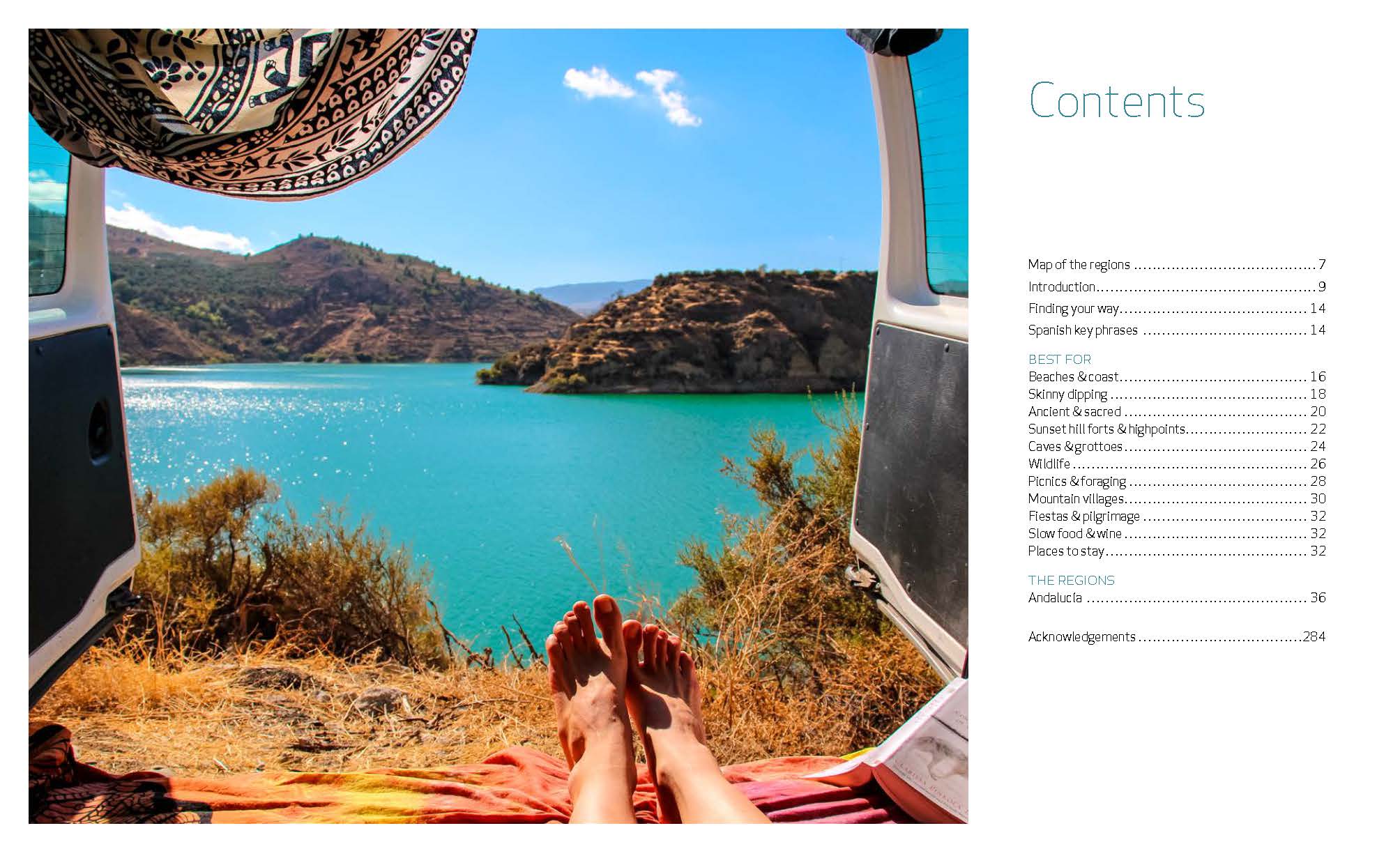 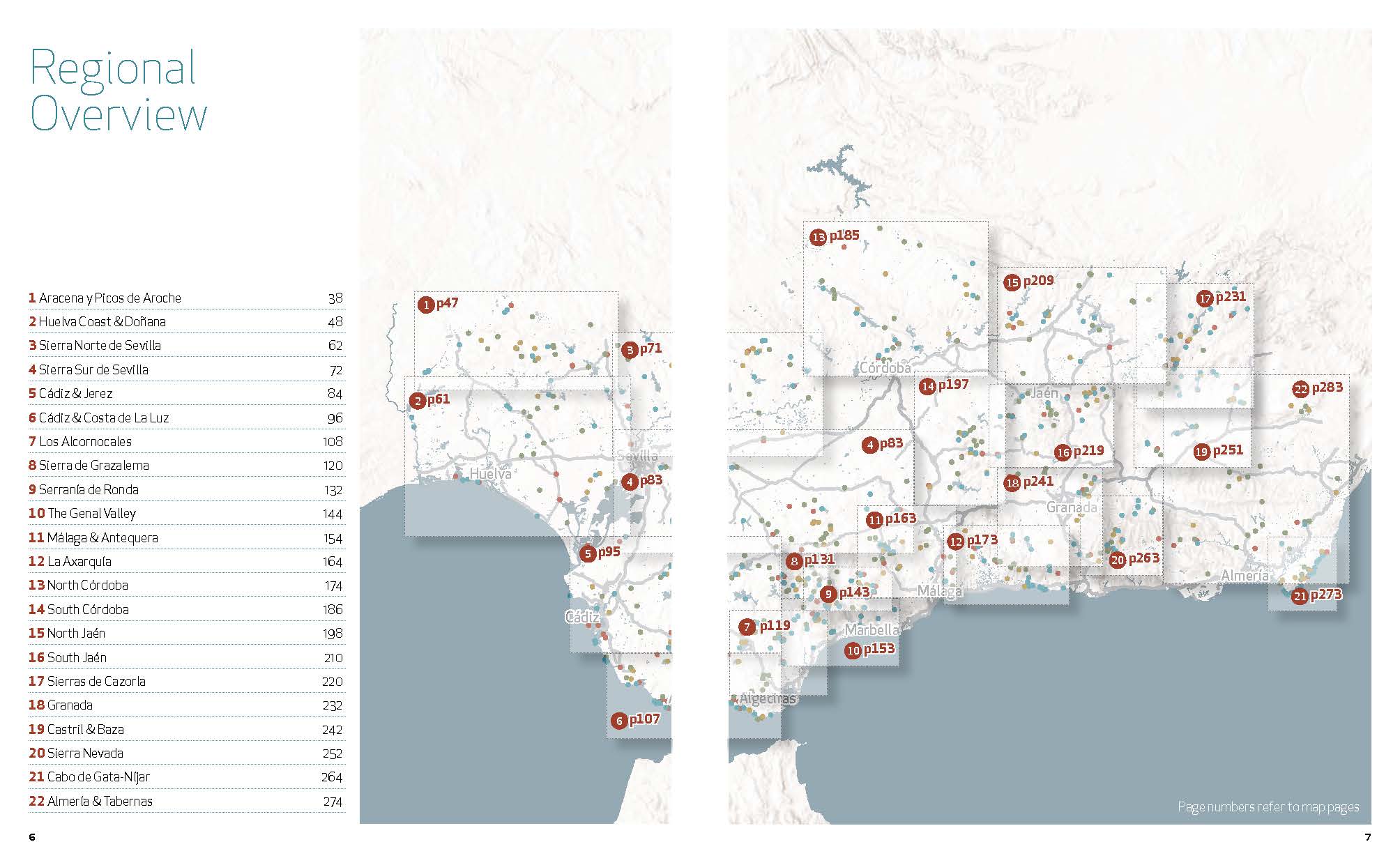 Swim from secret coves, plunge into mountain waterfalls, walk in wild flower meadows and cork forests. Explore lost ruins, caverns, watchtowers and abandoned villages. Find magical places to stay and enjoy the very best local and artisan food. In this explorer’s compendium you will discover the hidden parts of Andalucía’s famous coastal areas as well as its incredible lesser-known regions. Featuring stunning photography and engaging travel writing, this is the perfect book for families seeking new adventures off the beaten track or those dreaming up the ultimate wild escape.

350 photographs and 20 overview maps, GPS coordinates in directions, details of the history and geography of the region.

I first came to Andalucía having crossed the border from Portugal, in the spring of 2017, looking for its prehistoric sites which lay hidden under cork and oak trees. As the low woodland spread across this ancient frontier nothing seems to mark the territory but the river. As we reached the first villages it quickly came apparent this was Andalucía. Holy Week celebrations had begun, and balconies heaved with families leaning over to catch glimpses of the paso. Inching past us along the narrow street and threatening to fall with each sway was the Virgin, long gold cloak spread out, surrounded by tall candles, and decked in flowers. These processions became a recurrent theme of my journeys, caught in the crowds, armfuls of petals thrown from rooftops, incense, trumpets and drumming. 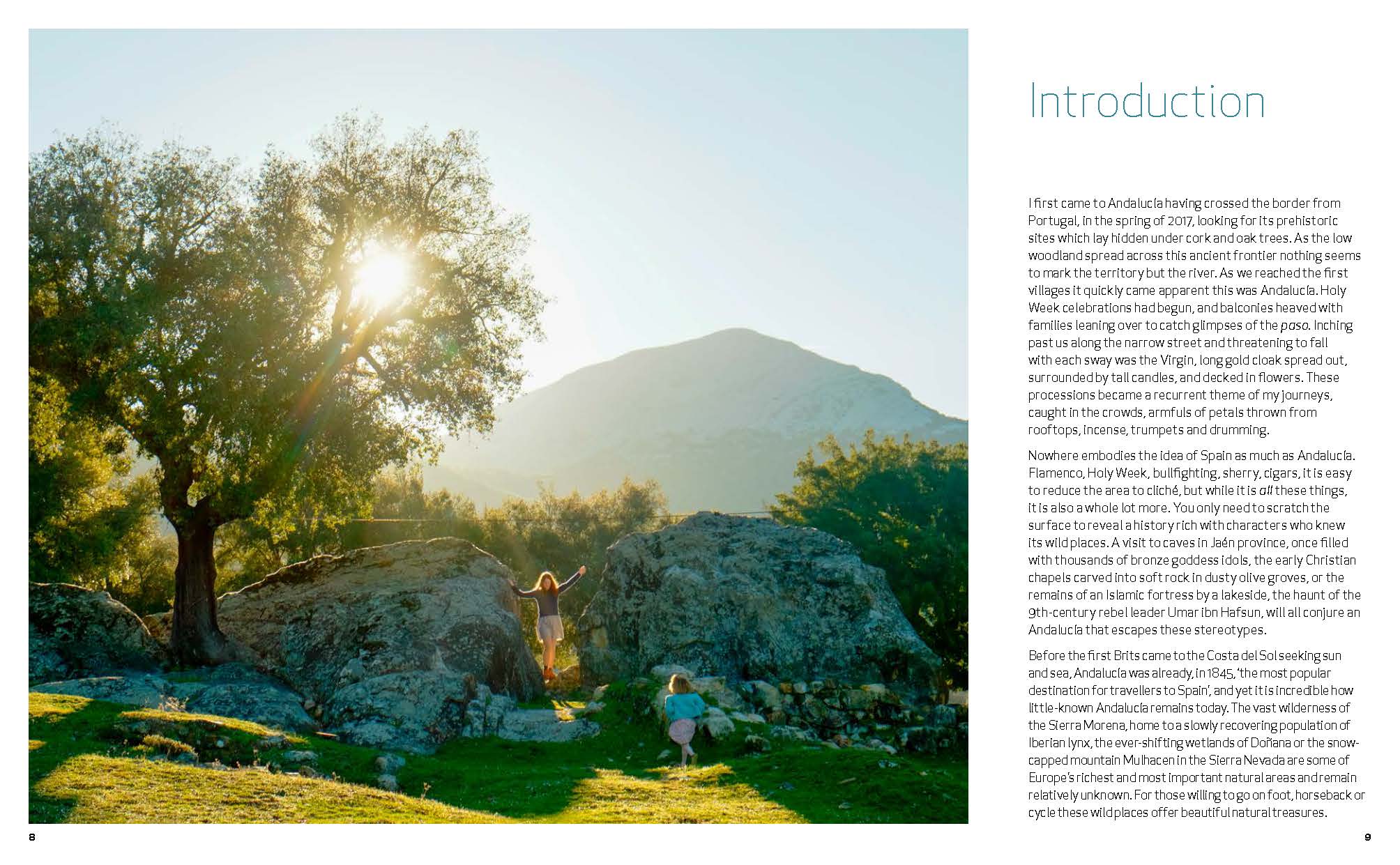 Nowhere embodies the idea of Spain as much as Andalucía. Flamenco, Holy Week, bullfighting, sherry, cigars, it is easy to reduce the area to cliché, but while it is all these things, it is also a whole lot more. You only need to scratch the surface to reveal a history rich with characters who knew its wild places. A visit to caves in Jaén province, once filled with thousands of bronze goddess idols, the early Christian chapels carved into soft rock in dusty olive groves, or the remains of an Islamic fortress by a lakeside, the haunt of the 9th-century rebel leader Umar ibn Hafsun, will all conjure an Andalucía that escapes these stereotypes.
Before the first Brits came to the Costa del Sol seeking sun and sea, Andalucía was already, in 1845, ‘the most popular destination for travellers to Spain’, and yet it is incredible how little-known Andalucía remains today. The vast wilderness of the Sierra Morena, home to a slowly recovering population of Iberian lynx, the ever-shifting wetlands of Doñana or the snow-capped mountain Mulhacen in the Sierra Nevada are some of Europe’s richest and most important natural areas and remain relatively unknown. For those willing to go on foot, horseback or cycle these wild places offer beautiful natural treasures. 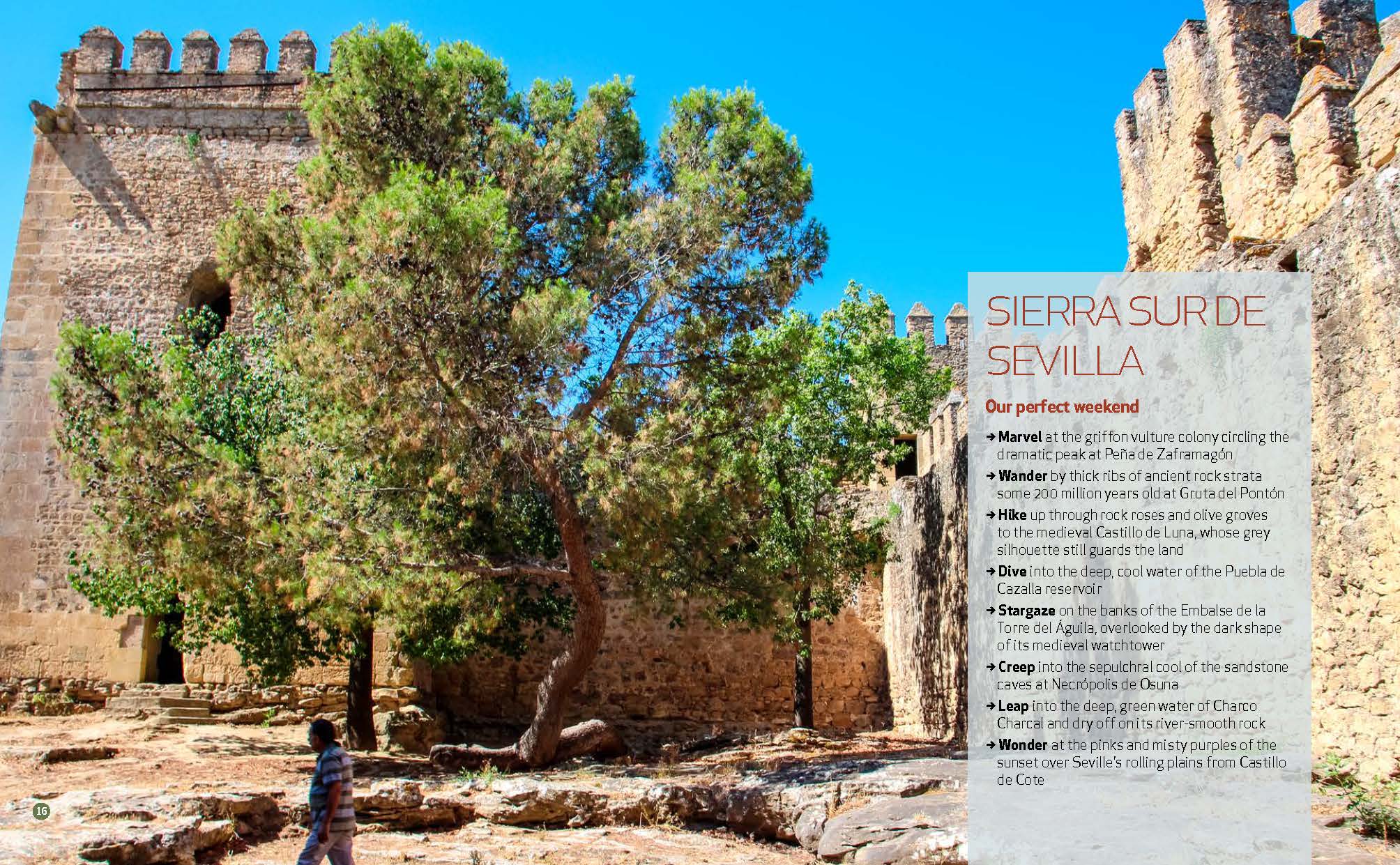 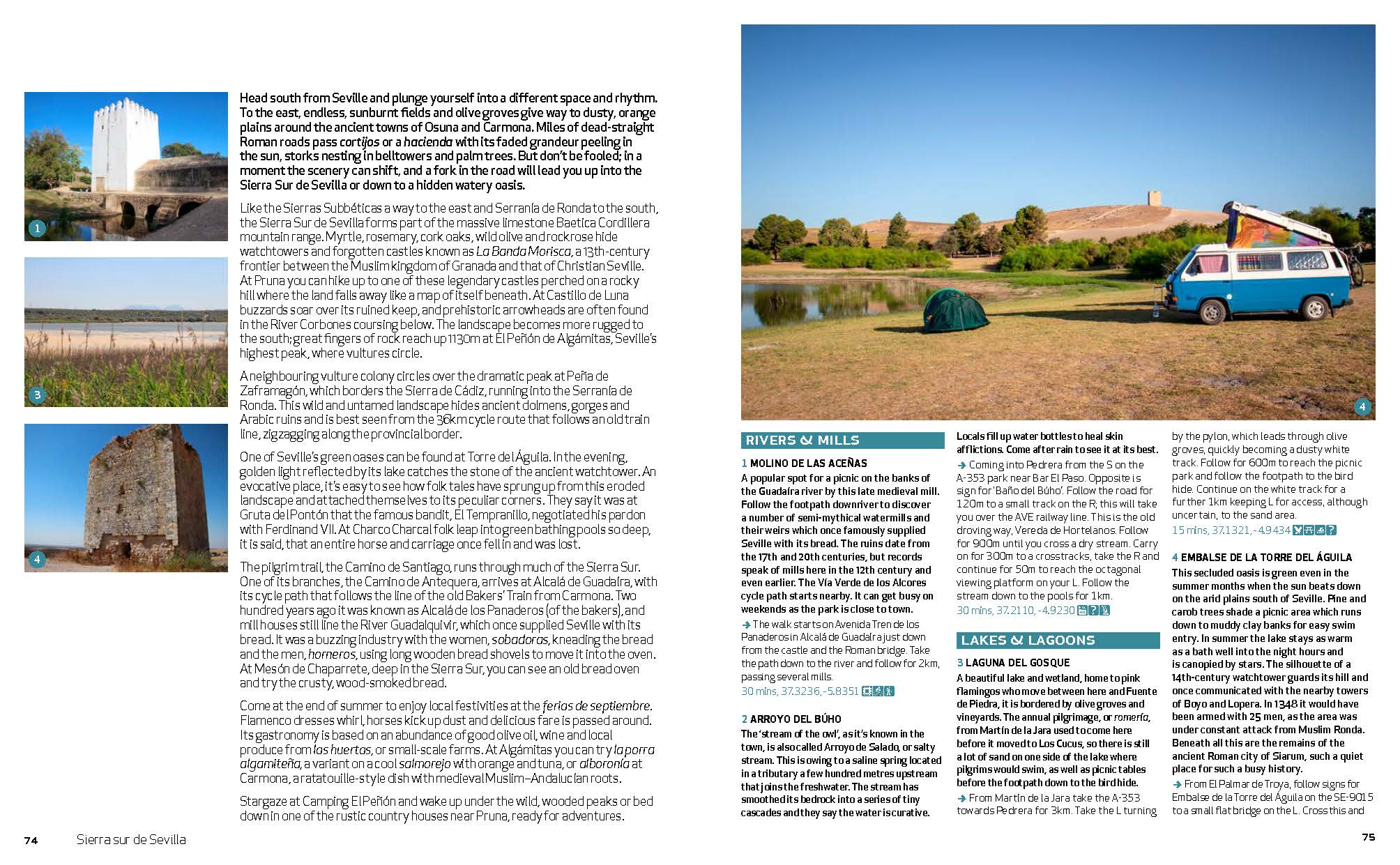 Andalucía has been subjected to endless romanticised versions. In the 19th century notions of the bandits living in wild hills and gypsies in picturesque caverns took root. But the Romantic travellers were just one of many successive waves of invasions and migrations that have each brought with them their own myths and fictions. The golden hoard of El Carambolo pulled from river mud outside Seville has shed more light on the semi-mythical harbour city of Tartessos, said to have been built beyond the Pillars of Hercules, or Straits of Gibraltar, around the 8th century BC. Serious historians even today make speculative links between this site and the Atlantis myth. And the region would come to be reconquered and reimagined once again when Tariq, a general from Tangier, sailed across the Straits on a quiet morning in 711, ushering in eight centuries of Islamic rule and the kingdom of Al-Andalus.

As more artefacts and hidden treasures emerge from these cultures, it is difficult to separate muddied facts from fiction. What we do know is that Andalucía, the gateway between Africa and Europe, has always been in flux. Just like the skies above. We only need to look up to see the heavens filled with bird migrations between the two continents. At just 13km at its narrowest point, the Straits are a crucial crossing point for birdlife. Visit in early autumn to see blue skies flecked with thousands of griffon vultures spiralling up on thermals. It is a thrilling experience to see these incredibly earthy creatures of feather, flesh, and claws, soaring overhead to Africa.

Stunning places to watch for wildlife continue across the region’s eight provinces. Head to the sheer ravines and deep forests of Sierra de Cazorla in autumn to listen for la Berrea, the bellows of stags during mating season, or watch for hundreds of pink flamingos in the salt marshes of Fuente de Piedra in Málaga. Fearless ibex, a wild mountain goat, crown the most vertical of plunges in the Sierra Nevada and in late summer you can look for whales, orcas and dolphins gliding between the Mediterranean Sea and Atlantic ocean. 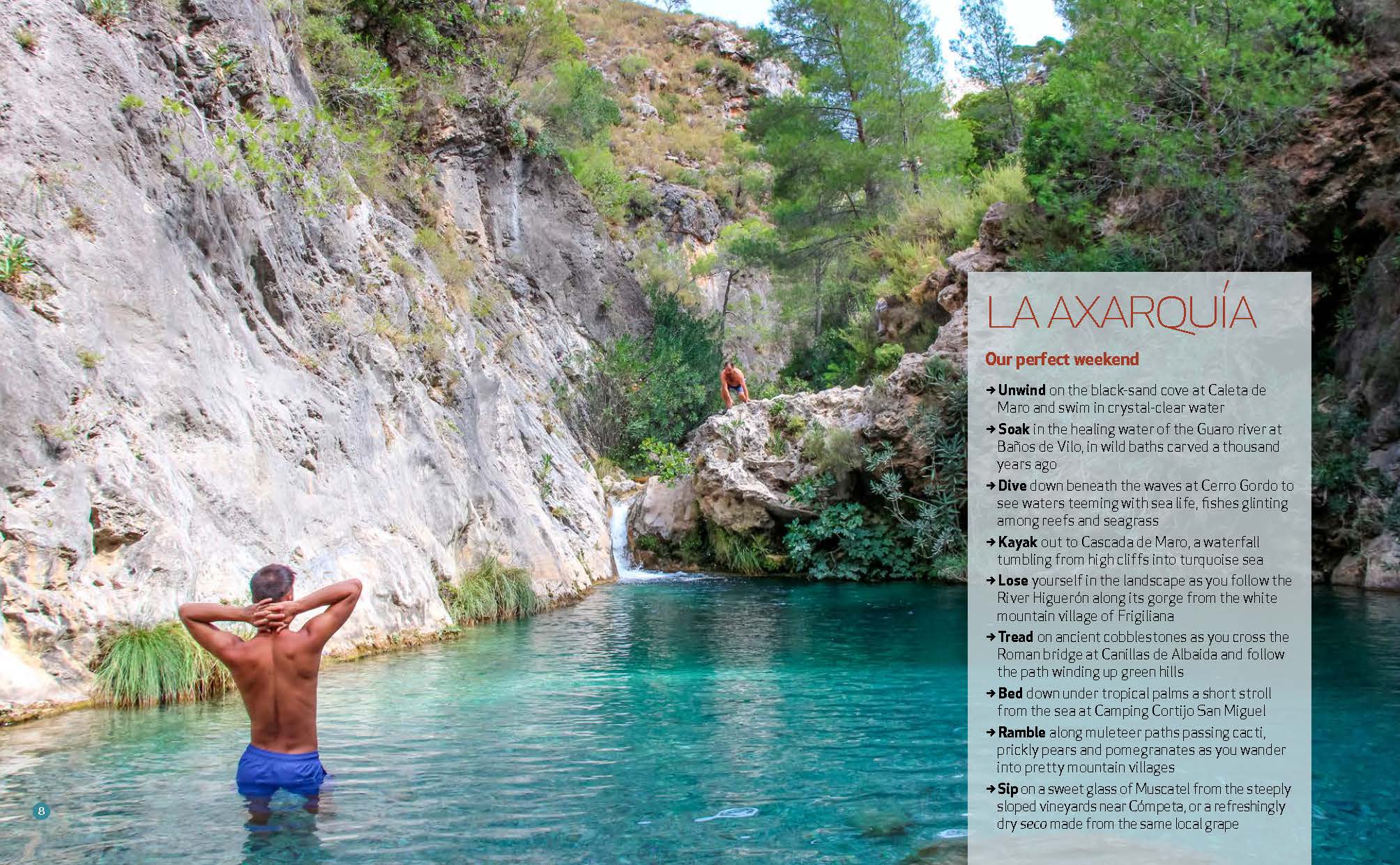 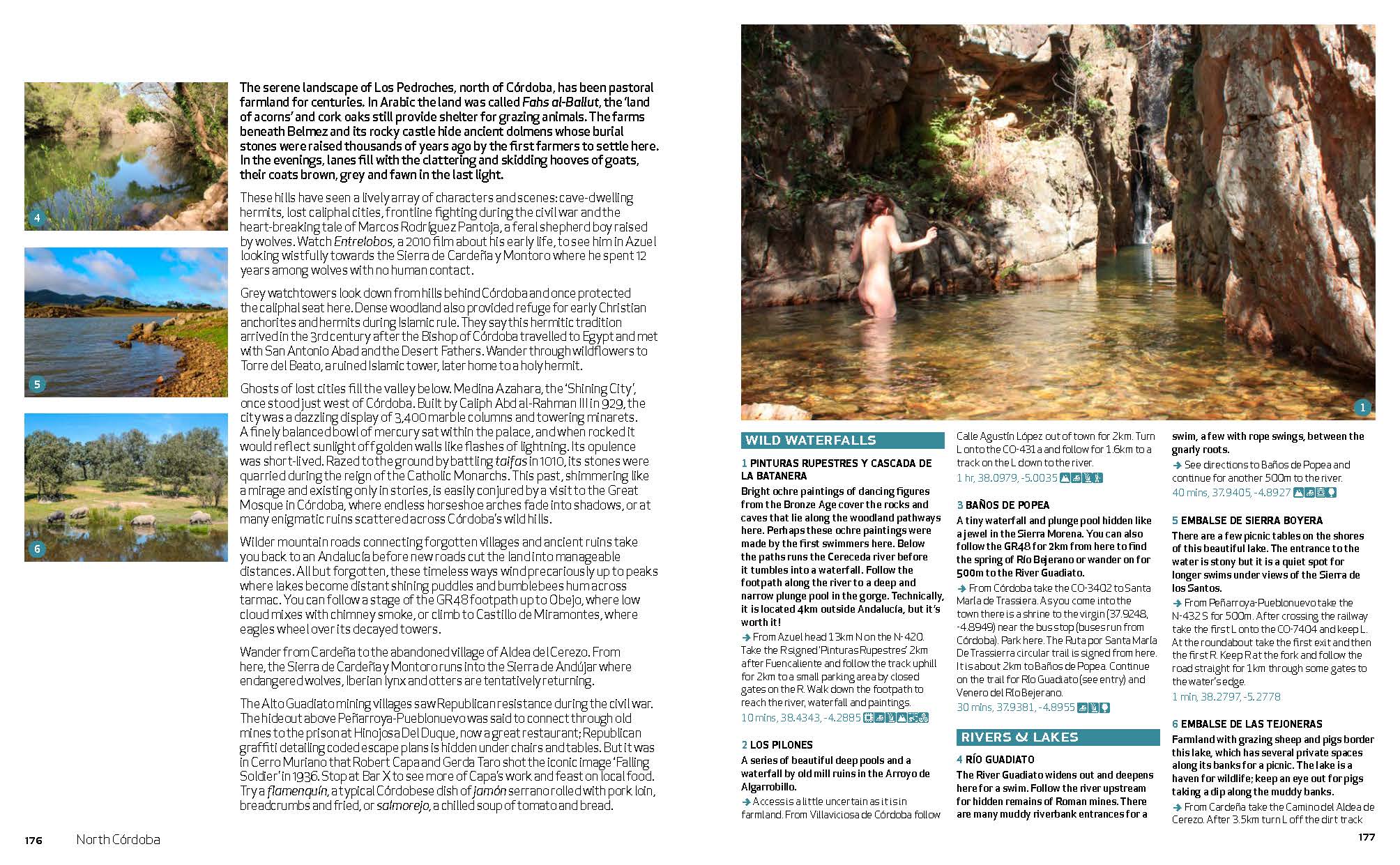 Food and places to stay

Andalucía is as rich in adventures over mountains, lakes, cliffs, deserts, caves, rivers and sea, as it is rich in the food and wine to fuel these adventures. In the mountains, feast on grilled local meats or embutidos, chorizos, sausages, and cured hams. If you visit the Sierra de Grazalema, whose hills receive the most annual rainfall in Spain, be sure to try queso de payoyo, a cheese produced by the goats grazing on its green grass. By the rivers try freshwater fish. At the coast, feast on grilled prawns, heaped plates of fried fish or bubbling seafood rice dishes to share. Kept in caves and cellars are the region’s hallowed wines: sip on dry white manzanillas by the mouth of Andalucía’s great river Guadalquivir, and sherries ranging from opaque gold palo cortados to darker ambers of amontillados, olorosos and sweet pedro ximénez in the bodegas of Jerez de la Frontera. Head to La Axarquía mountains in Málaga for intense moscatels and the deserts of Almería or villages of the Sierra Nevada for deep dark reds.

You will discover the best places to eat, dishes made to recipes handed down through generations, but also rural havens perfect for romantic escapes. Spend a week in a characterful mountain village with sparkling stone fountains or a wild retreat to a working farm. There are safari tents hidden in pine woodland with birdsong in trees overhead or wilder campsites from which to stargaze.

Andalucía is a place woven over with paths and stories left by Iberian tribes, Andalusí kings, Christian crusaders and sea-faring traders. It is crossed by Roman roads and pilgrims’ pathways connecting sacred mountain chapels. Enduring all of this are much older footprints stamped on stone – dinosaur footprints some 230 million years old, calluses pushed into mud-prints as though they were here yesterday (see North Jaén). A visit to these wild sites, woodland, hills, rivers and caves, will be thronged with a thousand stories from different times. Often just a hike away, they’ll transport you to an ancient, wilder time.

The result of these journeys and nights sleeping under stars is this compendium of wild, hidden and exceptionally beautiful places across Andalucía. It is packed with memories of cool rivers, thundering waterfalls, hidden springs, flashes of wildlife and sunsets seen from sacred sites. I hope that inspires love for these precious places and many more adventures. 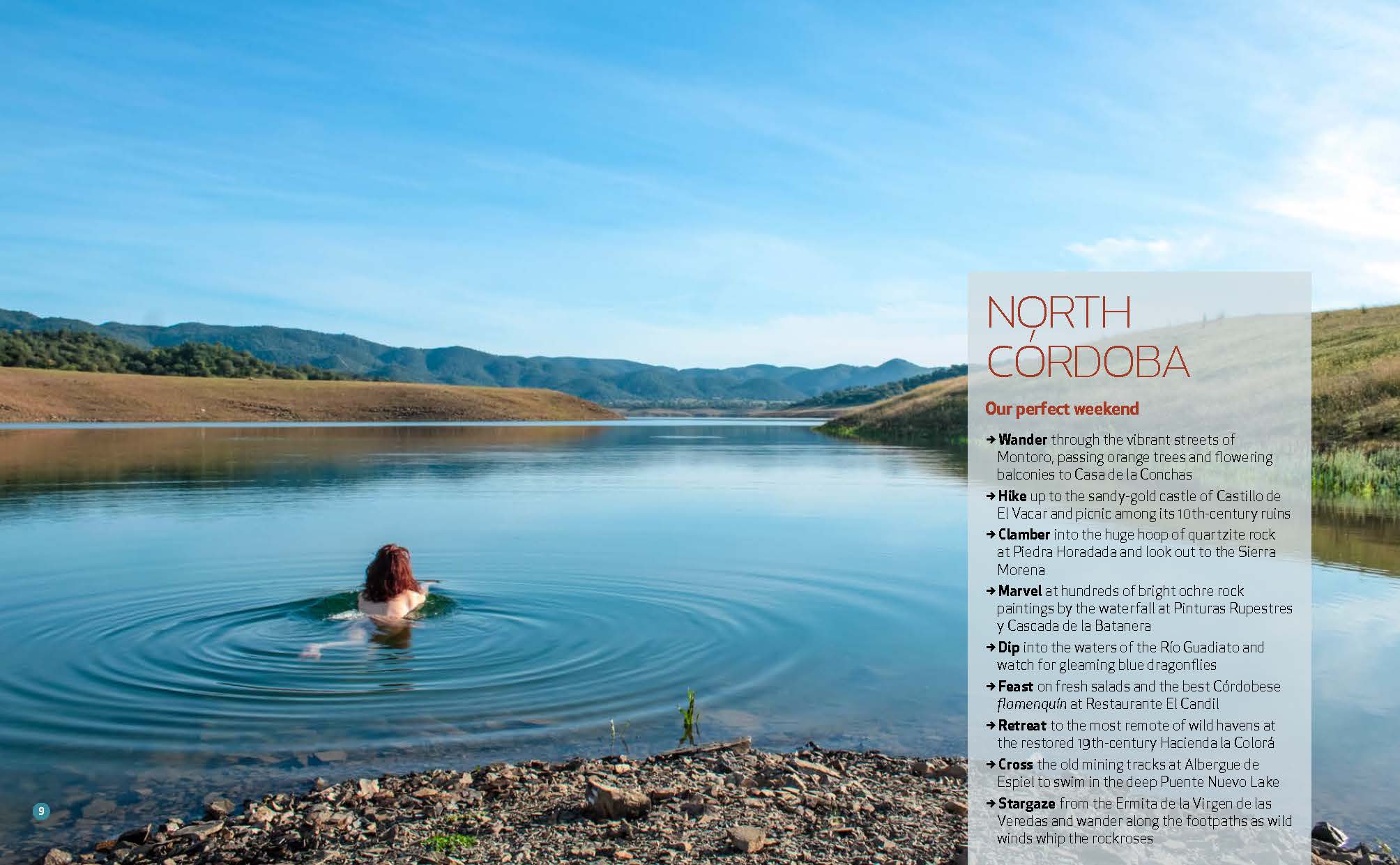